That’s based on a new report published yesterday by Canada’s Fleetcarma.

The bulk of the increase can be attributed to a 120% increase in Ontario, which drove sales in the entire country.

Historically, Quebec has been driving EV sales in Canada despite not being the most populous province, but Ontario is now taken the lead for the first time after introducing some of the most generous EV incentives ever seen, including a direct rebate of $14,000 on some electric cars.

Here are the total sales from the 3 leading provinces: 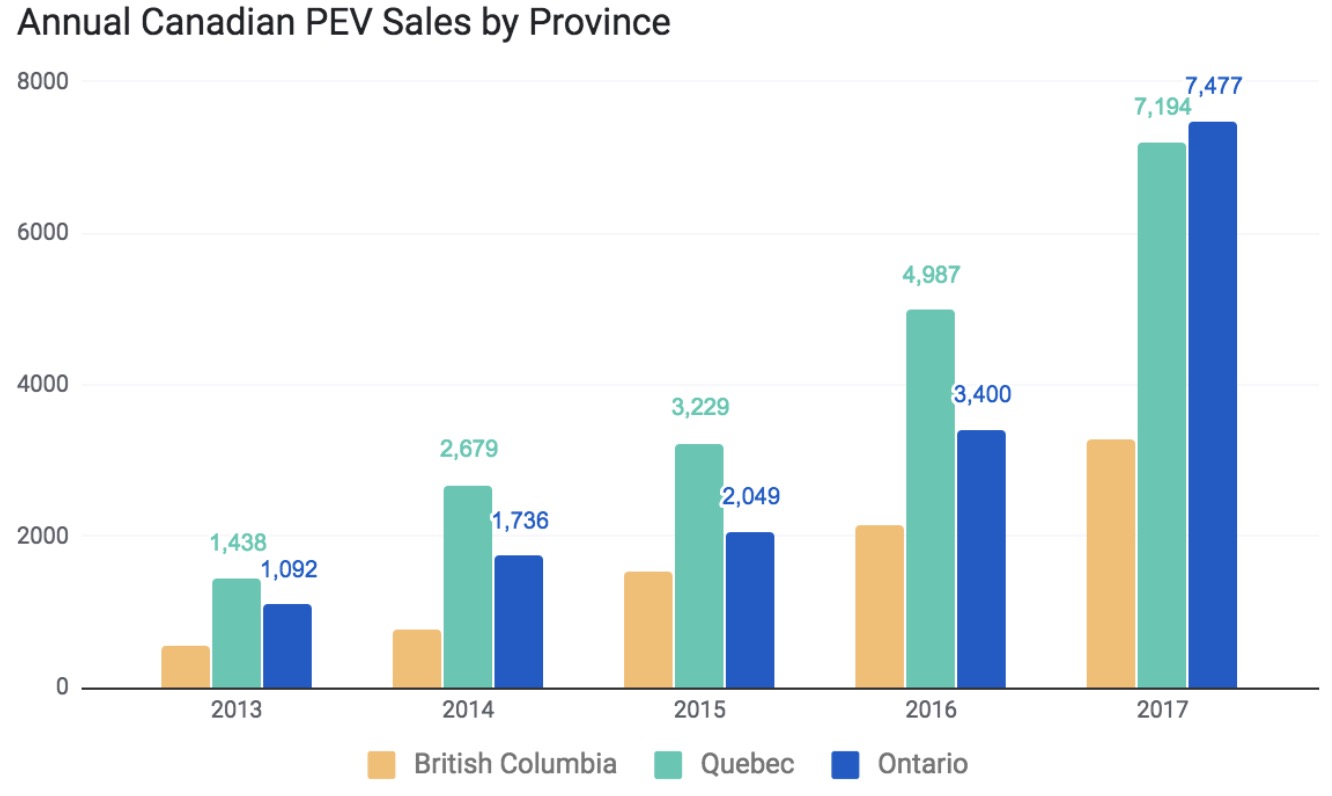 All other provinces barely have an impact on the overall sales in the country with Alberta coming in fourth with only 430 cars in 2017.

Another interesting piece of information is that battery-electric vehicle sales (BEV) outpaced plug-in hybrid sales (PHEV) in 2017, which wasn’t the case in 2016: 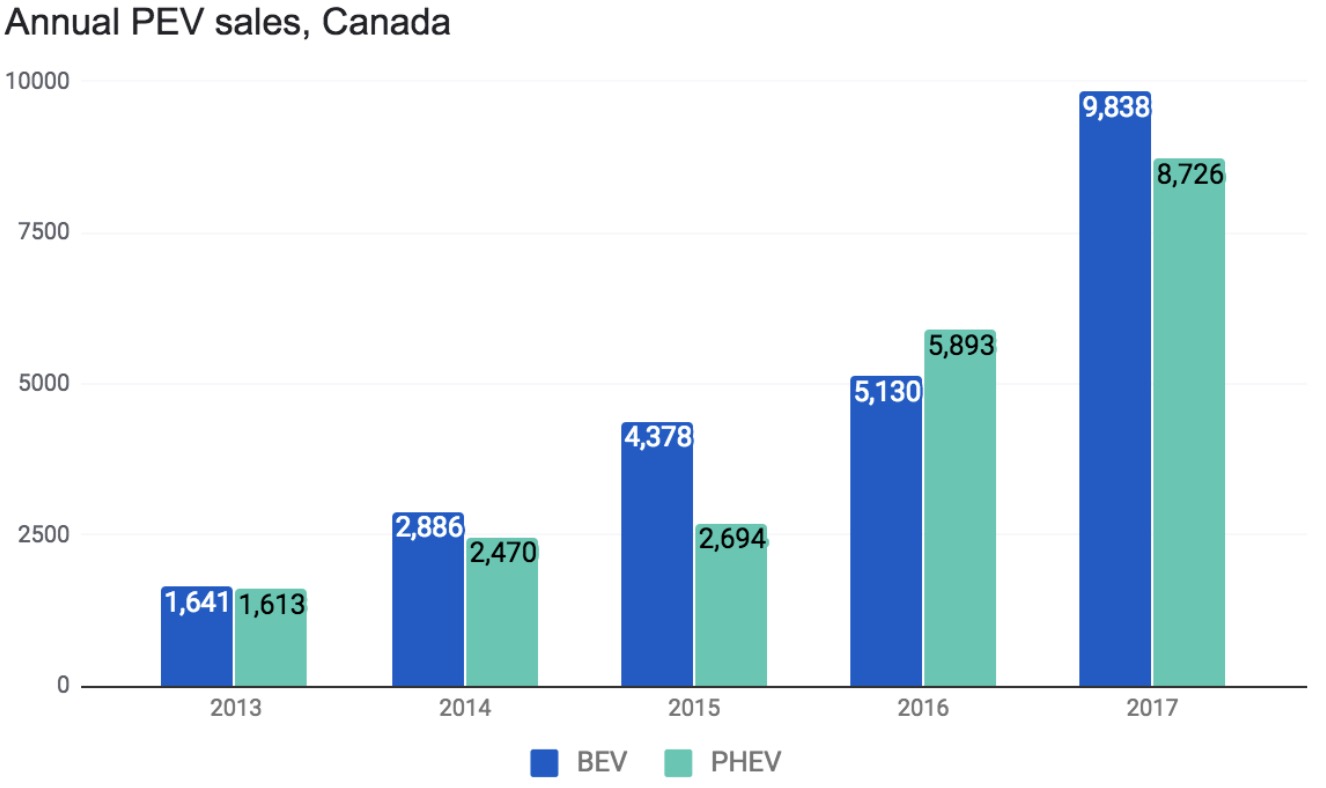 BEVs were helped by strong growth from both of Tesla’s vehicles, Model S and Model X, and the introduction of several new models on the market, including the Chevy Bolt EV, the Hyundai Ioniq Electric, and the VW e-Golf.

Here are the sales of the leading BEVs in the market:

In the PHEV’s corner, there are not many surprises. The Chevy Volt continues to dominate and sales actually increased 24% to 4,340 units.

The introduction of the Chrysler Pacifica hybrid and the Toyota Prius Prime also had some impact.

Overall, it was a great year for EVs in Canada and despite some volatility month-to-month, the growth is absolutely undeniable: 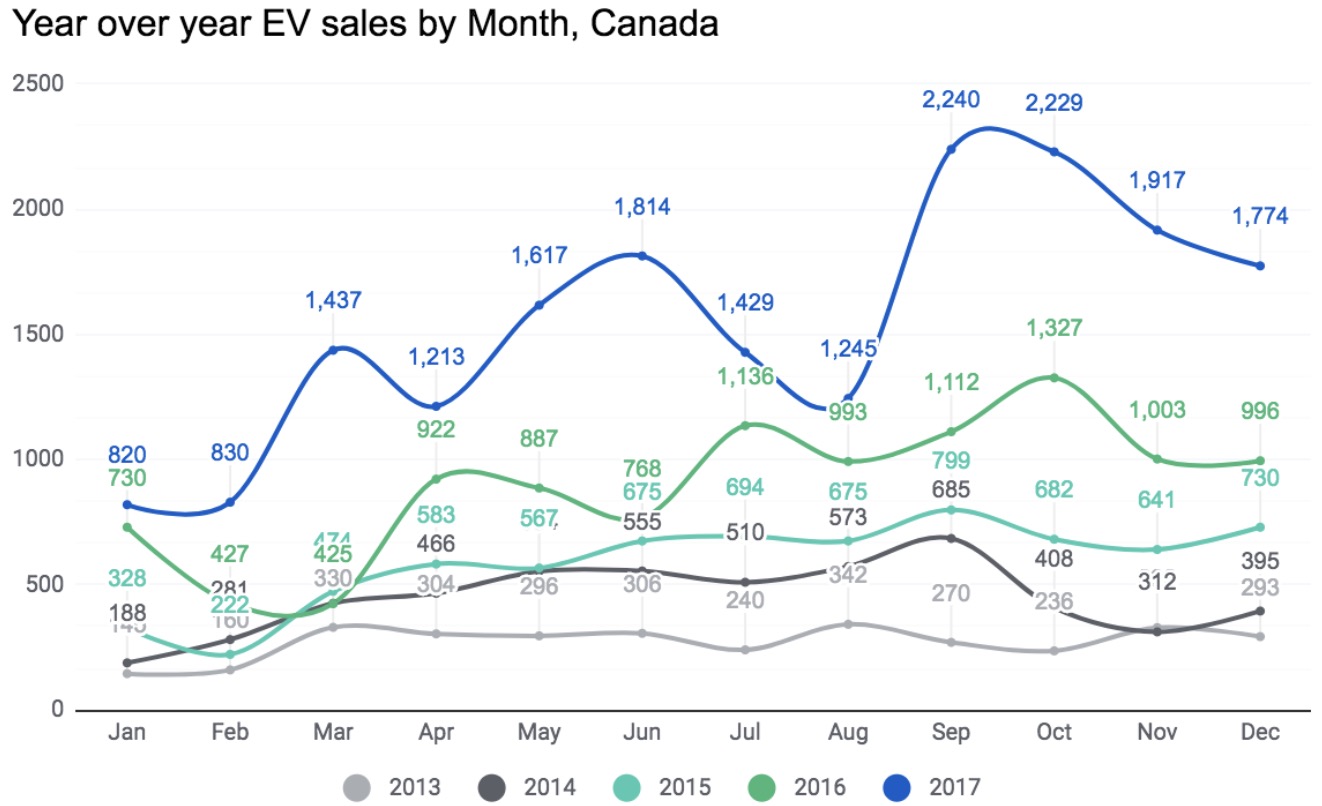 That’s some exciting data going into 2018, which I have no doubt will be a monster year for EVs in Canada – mainly because of Model 3.

I’ve heard that Model 3 reservations in Canada are through the roof and now with Tesla starting deliveries a little sooner than anticipated in the country, we are likely to soon see the impact.

The take rate is likely to be higher in Canada despite only more expensive configurations of the Model 3 being available. Colder climate and harsher winters mean that drivers are more likely to opt for the Long Range battery and dual motor all-wheel drive, while strong incentives in Ontario and Quebec are going to compensate for the higher price.

I might be too optimistic here, but I wouldn’t be surprised if the Model 3 alone drives a growth of 50 to 100-percent in BEV sales in Canada in 2018.