Germany has been a tough market for Tesla to thrive in and its sales are still way below where it first hoped for them to be. A preference for German automakers is likely part of Tesla’s issues in the market as an American brand, but the company also had a lot of difficulties dealing with the government, which is influenced by those other automakers.

Now it is even losing (again) the direct discount offered by the government to electric vehicle buyers after it was accused of gaming the subsidy system.

When Germany introduced its new plan to boost electric vehicle adoption through new incentives, including a €4,000 discount at the purchase, Tesla claimed that they were purposely left out of the program because of a cap for vehicles with a starting price of less than 60,000 € negotiated by the government and the German auto industry.

Tesla wasn’t being a crazy conspiracy theorist by claiming that German automakers had a hand in this since the government did indeed negotiate the structure of the incentive with German automakers because both public money and the automakers are paying for it.

In order to make the Model S eligible to the incentive, Tesla unbundled a bunch of standard features as an option in Model S in order to reduce the base price to 60,000 € negotiated by the government and the German auto industry before tax.

In this bundle, which Tesla called “comfort package”, we are talking about features like navigation, backup camera, internet radio, blind spot assist, and some very basic features like memory functions for seat positions, folding mirrors, Homelink connection that are generally standard in Tesla’s vehicles.

The move, which we reported on back in November 2016, technically made the Model S eligible for the incentive.

A year later, German car magazine Auto-Bild published a report claiming to just now seeing through Tesla’s “deception” and going as far as calling it “fraud” and “cheating”. They made it their cover: 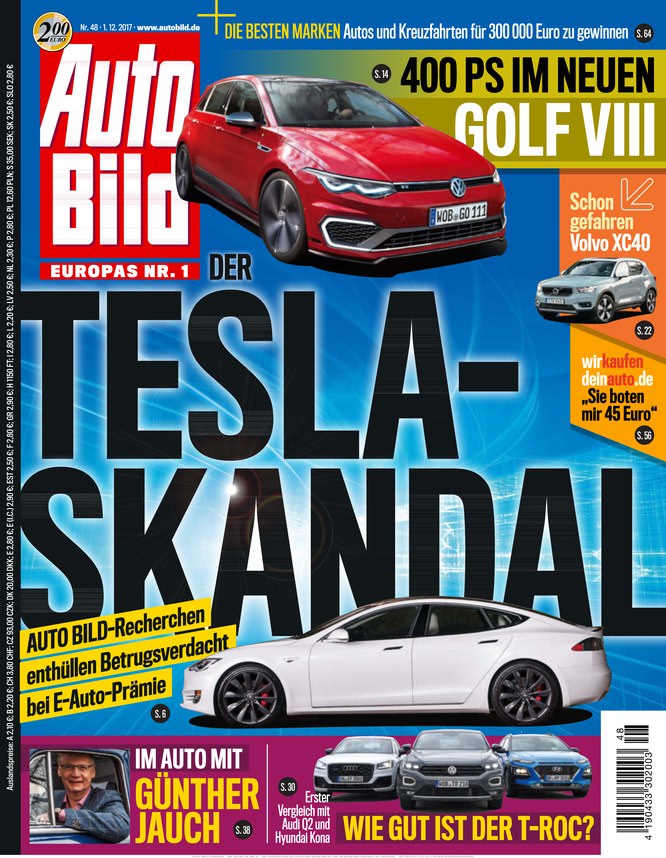 The magazine claimed that people could not order the car without those features, which made it ineligible for the incentive.

Tesla denies it and even said that some vehicles were delivered without the “comfort package”.

Nonetheless, Tesla has been once again excluded from the list of eligible electric vehicles for the €4,000 EV incentive.

It’s another setback for Tesla in the German market. The automaker had delivered 2,780 vehicles from January to October this year – a significant increase over the 1,485 vehicles delivered over the same period last year, but still nowhere near where it should be based on the size of the market.

German automakers are moving away from compliance EVs based on existing gas-powered cars and entering the EV space with their electric cars built from the ground up starting next year. It looks like Tesla hasn’t been able to carve itself an important part of the German market like they did in other places before those new EVs hit the market.

“This is a completely false accusation. Anyone in Germany can order a Tesla Model S base version without comfort package, and we have delivered such cars to customers. It’s important to note that the incentive price was intentionally set by the German Government at a level that was specifically intended to prevent Tesla cars from qualifying for it. As a result, Tesla planned to make an appeal to the EU trade commission, as this was against EU rules. Instead, Tesla and the German Government agreed on an acceptable middle ground that allows Tesla to sell a low option vehicle that qualifies for the incentive and customers can subsequently upgrade if they wish. That is exactly what Tesla has done.

Every Tesla customer can order their car online and select whatever options they like. It is clear from that ordering page that a Model S can be ordered without the comfort package. If a sales person told a customer they could not buy the Model S base version without the comfort package, this is not accurate and clearly outside our policies and procedures and we will investigate and take appropriate action as necessary.”