Over the last year, I started identifying a trend of new electric bikes that are so powerful that they are creeping into the electric dirt bike category – blurring the line between the two.

A new bike described as an ‘extreme performance all-terrain electric bike’ is a great example of this trend.

A Lithuania-based startup called Neematic is working on a bike, the Neematic FR/1.

They are owning this idea of blurring the lines of what is a bicycle. They described the Neematic FR/1:

“A true hybrid between a dirt bike and bicycle worlds.”

It is equipped with a 15,000-watt electric motor and a 2.2 kWh battery pack, which is a significant power and energy capacity for a bike.

In order to put it through its pace, they loaned one to Enduro racer champion Chris Birch to ride through the Alps in Italy.

Birch would be the right person to ask about this hybrid since he is known for his affinity with both motorbike riding and mountain bike riding. He described the Neematic FR/1 as “right in between”:

He also brings an interesting point about the bike enabling riders to go where motorbikes are generally not welcomed because of the noise pollution.

While a hybrid between a dirt bike and bicycle, it costs closer to a dirt bike. The company is currently talking about EUR 8000 ($9,300 USD) before taxes and shipping.

Neematic is backed VC firm Practica Capital and they aim to bring the bike to production next summer. 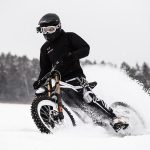 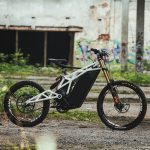