Tesla’s global fleet will reach half a million cars next year and 10 million cars within a decade, says Morgan Stanley

Tesla is on track to transition from being a niche automaker to a large volume automaker over the next few years. That’s a hard transition to predict since it hasn’t been done in the US for half a century.

Nonetheless, Morgan Stanley is giving it a shot and released today its projections for the growth of Tesla’s global fleet over the next few years.

Morgan Stanley’s automotive industry analyst, Adam Jonas, has long been relatively bullish on Tesla, but he has also been more conservative on the automaker’s delivery targets.

For example, he didn’t think that Tesla would deliver any Model 3 vehicles in 2017 until very recently.

Today, he released projections to support his financial models of the company, which he assigned an Equal-weight rating with a price target at $317.

He wrote in a note to clients:

“By early 2023, we forecast Tesla’s car population to have multiplied 10x compared to year-end 2017. Looking a bit further out to 2040, we forecast the total number of Tesla vehicles in use (including Tesla Mobility and Tesla Consumer and net of scrappage) to be nearly 32 million units, or 107x higher than the 2017 level.”

Here’s what that growth looks like on a chart: 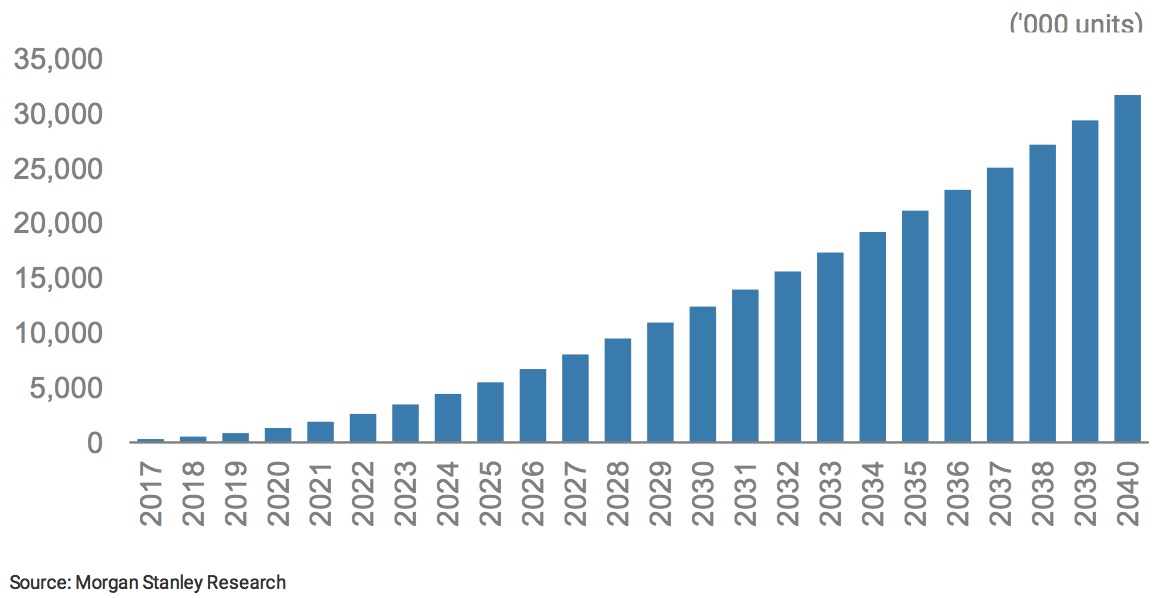 While an impressive projection and again unseen in the auto industry in a long time, it’s still slightly lagging behind Tesla’s own projection – or more accurately, CEO Elon Musk’s own publicly stated expectations.

Much of that early growth is attributed to Model 3, which Morgan Stanley believes will sell well through word-of-mouth:

“Tesla experienced a similar phenomenon with the Model S. If your neighbor gets a Model 3, you may want to drive it. Assuming your neighbor lets you drive it, you may decide want one. In that case, you won’t need to visit a Tesla store. With a 3 to 5x multiplication of the car population, the Tesla store will effectively come to you.”

Jonas, who is a proponent of the concept of autonomous ride-sharing, believes that a significant portion of those cars will go toward a ‘Tesla Mobility’ service so far referred to by the automaker as ‘Tesla Network‘.

Of course, one of the more interesting things about this potential growth is the EV infrastructure ramp that will need to follow closely.

It will be interesting to see how well it can support the growing fleet in the coming years.