When first unveiling the Tesla Model 3 in March 2016, the prototypes came equipped with new wheels designed by the automaker.

CEO Elon Musk said that they “spent a lot of time on those” and that they plan on bringing them to production. Though a lot of things have changed since and Tesla plans to limit the options available on the Model 3 – at least at the beginning.

Musk confirmed last month that wheel size is probably one of the only options that early Model 3 buyers will be able to choose– that and the color.

But he didn’t say anything about the options for the designs of the wheels, which is not always the same thing as wheel size.

Now we learn Tesla has obtained design patents on 3 of the Model 3 wheel designs that were previously unveiled. While it doesn’t mean they will release those wheels, it means they are securing the rights to them.

Tesla applied for the patents on March 30, as they were about to unveil the Model 3, and the design patents were released over the last month.

That’s the wheel designed that has been the most commonly spotted on Model 3 release candidates in the wild.

Von Holzhausen and Lee are the designers credited for the design of this wheel.

While not as popular as the first wheel, it was also spotted on several Model 3 release candidates.

As for the last wheel for which Tesla obtained a design patent last month, it was unveiled at the March 2016 event, but it was never spotted on any release candidate since – United States Patent USD788671: 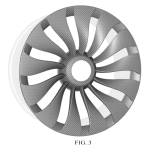 It was actually only seen on plastic model of the Model 3 and not on a working prototype like the two other vehicles.

Joonas Vartola, a car designer who doesn’t work for Tesla anymore, is credited for the design of this one.

If the release candidates are a good indicator of the options available for the Model 3, it looks this last one is not going to be available.

We should have a better idea of the wheel options for the Model 3 once Tesla starts opening the online design studio, which is expected to happen on or around the 28th when Tesla will deliver the first few vehicles.