Tesla plans to disconnect ‘almost all’ Superchargers from the grid and go solar+battery, says Elon Musk

Tesla has been talking about adding solar arrays and batteries to its Supercharger stations ever since announcing the fast-charging network in 2012.

But only half a dozen stations or so out of the over 800 stations ended up getting a solar array.

CEO Elon Musk said that they plan to deploy more battery and solar systems with the upcoming ‘Version 3’ of the Supercharger, but now he went a step further and claimed that “almost all Superchargers will disconnect from the electricity grid.”

Previously, Musk said that Tesla’s new Powerpack and solar arrays will power some Supercharger stations in sunny regions to go off-grid – adding that “the grid won’t be needed for moderate use Superchargers in non-snowy regions.”

While it makes sense to add solar arrays and battery packs, it’s not clear why there would be a need to completely disconnect from the grid, which is often still useful – especially if net metering is available.

Now Musk said on Twitter this morning that they are not only adding solar and batteries to “all Superchargers”, but also that “almost all” Supercharger stations will eventually disconnect from the grid:

All Superchargers are being converted to solar/battery power. Over time, almost all will disconnect from the electricity grid.

The comment was in response to someone stating that Tesla’s Superchargers are charging vehicles with dirty electricity from coal plants.

As we recently reported, while partly true, the statement makes no sense if the goal is to be less polluting than gas-powered vehicles.

A recent study of electricity generation concluded that the average electric car in the US now gets the equivalent efficiency of a non-existent 73 mpg gas-powered vehicle after accounting for emission from electricity production.

Even in regions where coal dominates electricity generation, electric cars are still more efficient than some of the most efficient gas-powered cars. Therefore, the argument could have ended here, but Musk apparently wants to take Tesla’s Supercharger network off-grid as part of the company’s mission to accelerate the advent of sustainable energy.

Depending on the size and popularity of a Supercharger station, which generally varies from 6 partly used stalls to 20 stalls in almost constant use, Tesla would need some significantly large solar arrays at some stations – almost football field in size. Unless there are some impressive advancements in efficiency, it’s not clear how they would make it happen.

Earlier this year, Tesla announced a new expansion of its Supercharger network to include larger stations with 50 to 100 stalls and those are expected to feature large solar carports – pictured above and below. 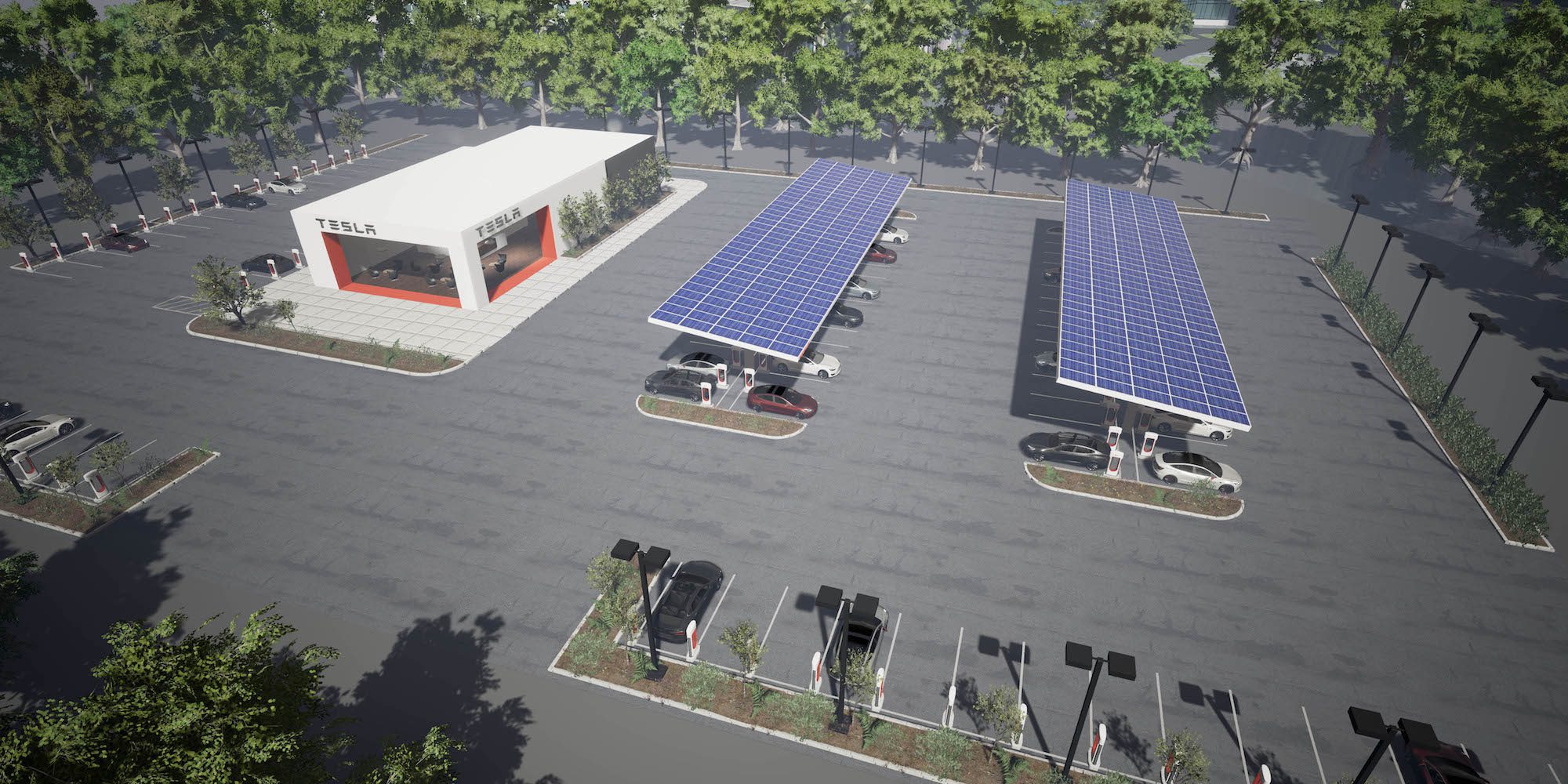 Maybe we will start to see more deployment of solar products at Tesla’s facilities once the company starts producing its own solar panels with Panasonic at Gigafactory 2 this summer.

In the meantime, the expansion is well underway. As reported last week, Tesla started construction or acquired permits for over 40 more stations since announcing the expansion less than 2 months ago.