Tesla’s stock (TSLA) could surge to over $500 with a successful launch of Model 3 production, says Baird

Most industry watchers agree that Tesla’s short term success is linked to a successful launch and ramp up of Model 3 production.

In a new note today, Baird analyst Ben Kallo highlights what a successful launch could do for Tesla’s valuation, which he sees surging to over $80 billion at ~$500 per share.

He reiterated an Outperform rating and a price target of $368, which is on the higher end of Wall Street’s price range for Tesla, but he also shared his ‘blue sky’ scenario:

“We continue to believe a successful Model 3 launch will be an inflection point for stock, and recommend owning shares into the launch. In this note we outline a path to a >$500 TSLA share price, which we believe is feasible if management achieves its stated targets. Additionally, we discuss some of the unique characteristics of TSLA, including increased investor interest, brand recognition, and talent attraction. TSLA remains a top pick with further growth upcoming.”

Kallo estimates that Tesla should be worth $566 per share, instead of the current ~$300 per share, if Tesla’s own production targets are achieved. Here’s the valuation model (via streetinsider): 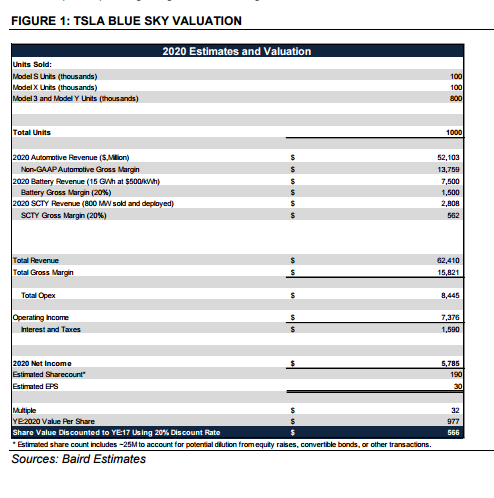 Earlier this month, they gave an update on the Model 3 production plan to reiterate a start in July and ramp to 5,000 units per week by the end of the year. They are aiming to reach an annual production rate of 400,000 units in 2018.

As for the Model Y, Elon Musk recently said that the electric crossover is coming in ‘late 2019 or 2020’ on new platform. Musk previously said that he expects the demand for the Model Y to be equal or greater than for the Model 3, which supports Kallo’s model of 800,000 combined production of Model 3 and Model Y.

Kallo is one of the top-ranked analysts on Tip Rank: #729 out of 4560 with a 56% success rate and 6.7% average return. He has one of the most extensive histories of coverage on Tesla: