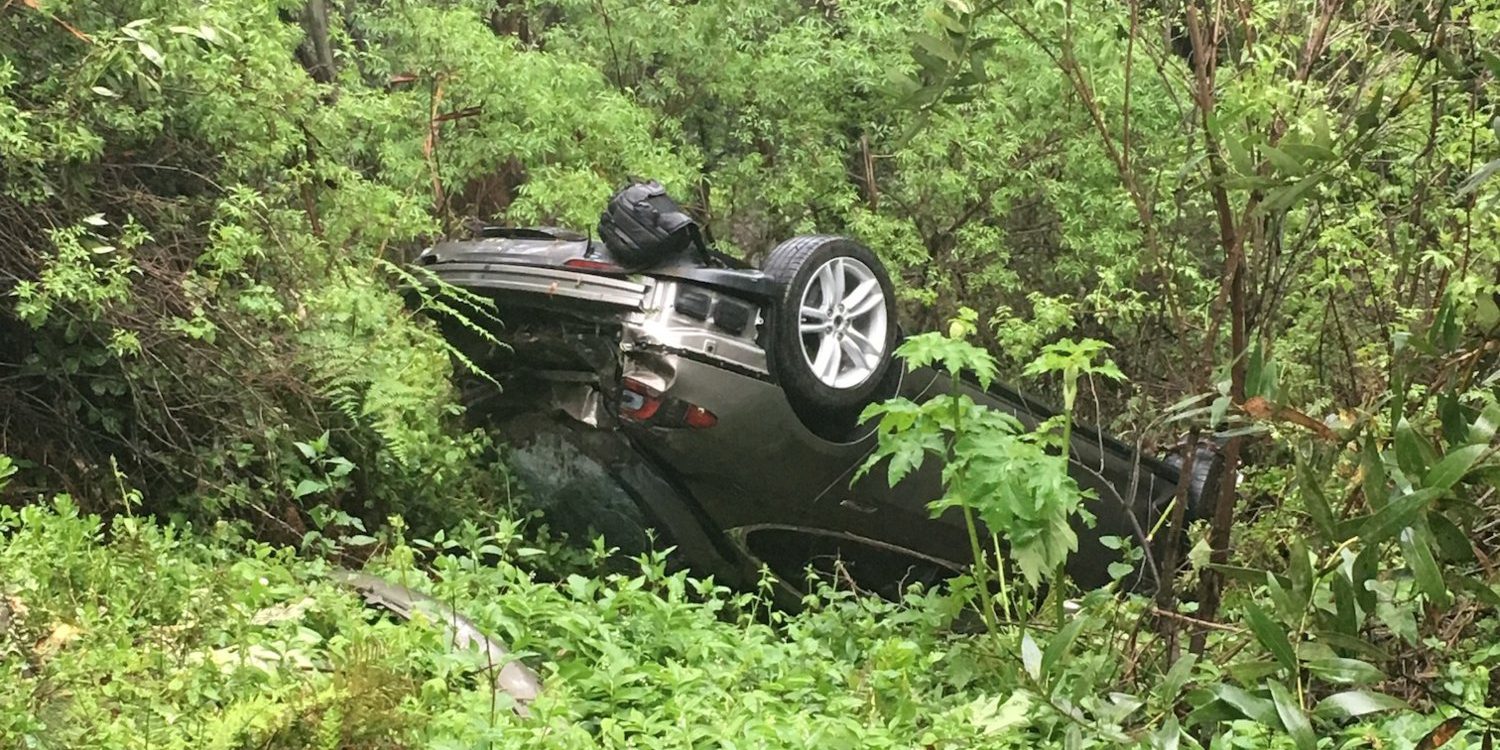 We have reported before on Tesla owners crediting their vehicles’ safety features for saving their lives after severe accidents, like when a Model X crashed into a semi-truck earlier this year, but probably none as spectacular as a crash that happened in California last week.

A Tesla Model S driver and his passenger walked away unscathed after their vehicle tumbled ~500 feet down a cliff and ended up upside down in a trail.

The driver, who wishes to remain anonymous, explained that a deer made him swerve off the edge while he was driving on Grizzly Peak Blvd on his way to the Oakland hills:

“While Driving perhaps a tad too spirited, a deer appeared at a curve at the worst possible moment. I instinctively (mistakenly) swerved to avoid it and my car ended up over the edge. We tumbled perhaps 150-200 feet down a steep slope, ended up upside down.”

They later found that it was closer to 500 feet down from the road after they had to tow the Model S back up.

He shared a few pictures of the slope where the car jumped off the edge:

After what the driver described as “the most terrifying seconds of his life”, he and the passenger realised that they were both “totally OK – with only bruises and muscle soreness”.

They were surprised to found that the interior cabin of the vehicle was “totally intact”. It’s only when they climbed out of the car through the sunroof that they realized the severity of the damages on the body of the car.

It showed that the large crumple zones in Tesla’s vehicles (due to the lack of an engine) can be very useful in high-velocity impacts – sometimes even lifesaving. The driver said: “It felt rock solid to me and I feel lucky to be alive because of my tesla.”

The roof also played a crucial role since the vehicle rolled and ended up upside down. The sunroof detached itself midway down the cliff, but it didn’t affect the strength of the Model S’ roof, which broke NHTSA’s roof-crushing test equipment when they performed their crash tests. It could register a result past 4Gs – meaning that 4 Model S’s could pile up on another without the cabin caving in.

They managed to hike up the trail and get back OK, but since it happened right before Easter weekend, they had to leave the Model S there.

Only yesterday (Tuesday), they were able to get the vehicle out of the trail after the tow company spent 4 hours and used 550 feet of rope to bring it back on the road:

The owner is already looking to get a new Tesla. he also recomends to drive “a bit more cautiously” at night on those mountain roads.

You want to save money on your utility bill? Solar power is often a solution. We suggest getting quotes from more than one installer to make sure you get the best energy solution for your place. UnderstandSolar is a great free service to link you to top-rated solar installers in your region for personalized solar estimates for free.