While Hyperloop One has been making great technical progress in the US on the high-speed transportation system first envisioned by Tesla CEO Elon Musk, the interest for actual deployment of the system has been way greater outside of the states, like in Dubai for example.

But today, the company attempts to change that by revealing the US routes with the most potential.

The 11 routes have been designed by independent teams through the Hyperloop One Global Challenge announced last year.

Shervin Pishevar, executive chairman of Hyperloop One, said today about the announcement:

“The U.S. has always been a global innovation vanguard – driving advancements in computing, communication and media to rail, automobiles and aeronautics.  Now, with Hyperloop One, we are on the brink of the first great breakthrough in transportation technology of the 21st century, eliminating the barriers of time and distance and unlocking vast economic opportunities.

The “breakthrough” that he is referencing is the completion of the first Hyperloop full-scale test track and the imminent test that will ensue, which the company has been calling the “Kitty Hawk” moment.

They confirmed today that they finalized the tube installation on its 1640-foot-long DevLoop located in North Las Vegas. It doesn’t mean that it is completed and operational, but it’s one step closer. The released new pictures today:

They released images of the construction last month. While it is full-scale, the length of the track is shorter than originally announced by the company and therefore, it’s not clear if they will be able to achieve the originally targeted speed of ~700 mph.

But today’s main announcement is the 11 US finalists for the hyperloop routes. Again, those were developed by teams independent from the company and were selected based on the feasibility of the projects: 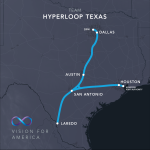 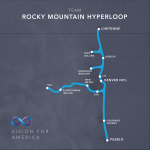 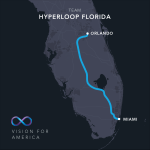 They join 24 other teams from around the globe and out of the 35 total, 3 will be chosen to work directly with Hyperloop One engineering and business development teams to “explore project development and financing.”

It doesn’t mean that those 3 routes will get a hyperloop system, but their chances will be significantly higher.

So far, it seems that Dubai is the most likely location for the first hyperloop system.