Tesla Autopilot is currently using only 1 out of 8 cameras of the new hardware suite, still very much in ‘beta’

There has been some frustration from Tesla owners around the transition from the first generation Autopilot to the second generation. Lately, people have been sharing the failings of the first few iterations of the Autosteer feature under the new system (see below).

It might be a good opportunity to remind everyone that the feature is still very much in “beta”, more so with the second generation than the first, and that it should be used with caution. We even learned that Tesla is currently utilizing only 1 out 8 cameras on the new hardware suite, which goes to show how the system is currently not representative of its potential.

“Yes, we had some challenges in the transition from Mobileye to Tesla software running on GPU. The original plan was to have a migration strategy where we have Mobileye and Tesla Vision operating at the same time to have this kind of a smooth process, but Mobileye refused to do that so that forced us to re-spin the board and caused unexpected delays.”

The first gen used only one front facing camera with Mobileye’s image recognition system and even though Tesla’s cars are now equipped with 8 cameras, 3 front-facing and 5 around the vehicle, it currently only utilizes one in order to recreate the capacity of the first gen system before improving on it.

A Model S owner in Arizona recently put this to the test and gradually covered the camera and used the Autopilot’s Autosteer feature to see if it was affected. He posted the results to the Tesla Motors Club:

He found that the Autopilot only used two out of eight cameras, but Electrek can actually confirm that Tesla currently only uses one out of the eight cameras of the new hardware suite: the main front-facing camera. The tape covering the other front-facing cameras could have affected the main one which could have led his test results, but there’s really only one camera in use when Autosteer is active.

Of course, Tesla keeps using the front-facing radar in addition to the camera, but it goes to show that the new hardware suite by Tesla is not really being utilized right now and the goal is really to bring those first generation features to parity on the new ‘Tesla Vision’ image recognition system.

So far it has been with mixed results. We have seen a lot of “Autopilot fails” videos pop up lately, like this one:

Obviously, those videos look worse than they should because the drivers are waiting longer than they usually would before correcting, but it definitely looks like conditions that the first generation Autopilot would generally handle better.

While both first generation and second generation Tesla owners with Autopilot are asked to keep their hands on the steering wheel, second gen owners should probably pay extra attention and that’s reflected in the warning message they get when activating the ‘Autosteer Beta’ feature: 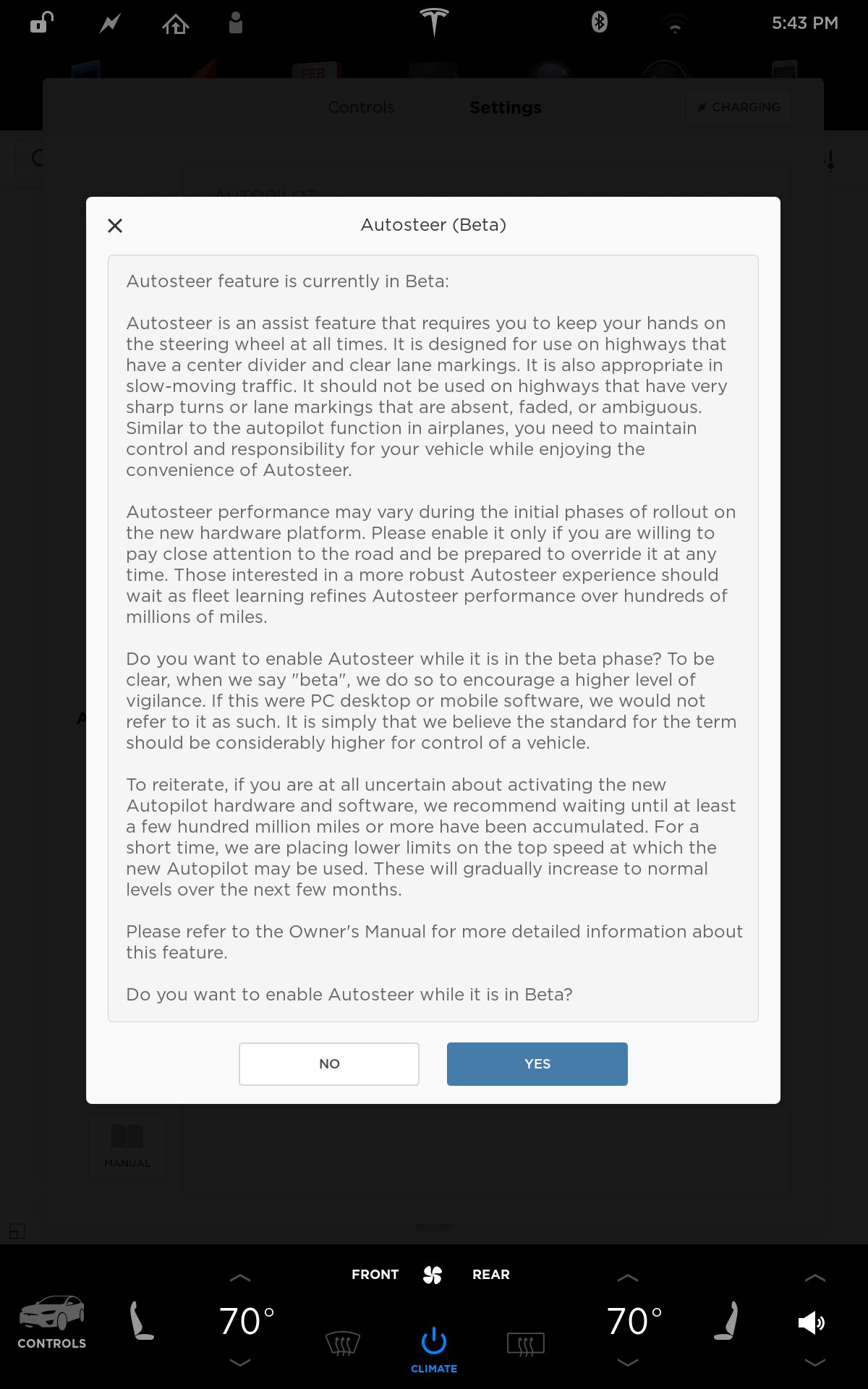 At least until Tesla Vision catches up with Mobileye’s system. It’s important to remember that the Autopilot 1 wasn’t that good either when it first came out, but after a few hundred million miles and eventually over 1.3 billion miles, the deep neural net learned a lot and was able to correct itself more efficiently.

Tesla says that owners can wait a little longer until the second-gen fleet can collectively achieve a “few hundred million miles”:

“To reiterate, if you are at all uncertain about activating the new Autopilot hardware and software, we recommend waiting until at least a few hundred million miles or more have been accumulated. For a short time, we are placing lower limits on the top speed at which the new Autopilot may be used. These will gradually increase to normal levels over the next few months.”

Considering the new hardware only launched in October 2016 and the Autosteer feature in January 2017, it’s not surprising that it hasn’t reached parity yet, both with restrictions and because of general performance.

Here’s a 20-minute drive by owner showing the current capability with the system, which is still getting decent results despite the restrictions:

Earlier this month, Tesla enabled Autosteer on ‘local roads’ with a 35 mph speed limit for the next-gen Autopilot and there are still general speed restrictions.

Aside from the 35 mph limit, the restrictions are similar to AP1 cars since the latest update in January.

Tesla CEO Elon Musk expects to be able to lift the speed limits up to parity with the first gen in the coming weeks. At that point, it should improve much faster as drivers will be able to utilize the feature more.

From there, hopefully, we will start to see Tesla enable the other cameras on the sensor suite and release the new features of the ‘Enhanced Autopilot’ package, like Autosteer+, Smart Summon, and more.