There’s a partly scary and partly encouraging trend emerging with air pollution in large metropolitan areas. An increasing number of major cities are reaching dangerous levels of health-threatening air pollution, which is obviously the scary part, but there’s also an increasing number of municipal governments taking gradually more drastic approaches to address those issues, and a big part of that is the move to EVs.

Several major cities, like Paris earlier this month, have resolved to limit the number of vehicles on the road on any given day by only allowing cars with odd-numbered registrations plates one day and even-numbered the next. They are also making public transport free during those times to compensate. These practices have now spread across Asia, Europe, and America. It’s a serious problem that is killing over 5 million people per year globally and reducing the life expectancy of 100s of millions more, according to recent research.

Electric vehicles are an obvious long-term solution to the problem, but interestingly, Tesla is taking a dual front approach that is worth exploring in more details.

Tesla is obviously addressing the issue by selling all-electric vehicles that don’t emit any tailpipe emission and of course, with the solar City acquisition building clean power generation.  But the company is also taking a defensive approach with its HEPA air filter system that blocks all gaseous pollutants from entering the cabin of its vehicles.

When it is running at full capacity, it not only can change the world’s most polluted air into a safe level of breathable air, but the company claims that it also acts as ‘bioweapon defense mode’ blocking any bacteria, viruses, pollen and mold spores.

The feature incentivizes people living in areas where the air regularly hits dangerous levels of pollution to get the vehicle, which is, of course, an electric car. Therefore, it contributes to helping solve the root cause of the problem and creates a positive snowball effect.

The company hasn’t been advertising the feature heavily internationally, but it is pushing it more in China where air pollution is more of a widespread issue. The company produced a video showcasing the system for the Chinese audience:

The filter in the Model S and X is about 10 times larger than a normal car filter and the company claims it is “100 times more effective than premium automotive filters” and that it removes “at least 99.97% of fine particulate matter and gaseous pollutants, as well as bacteria, viruses, pollen and mold spores.” 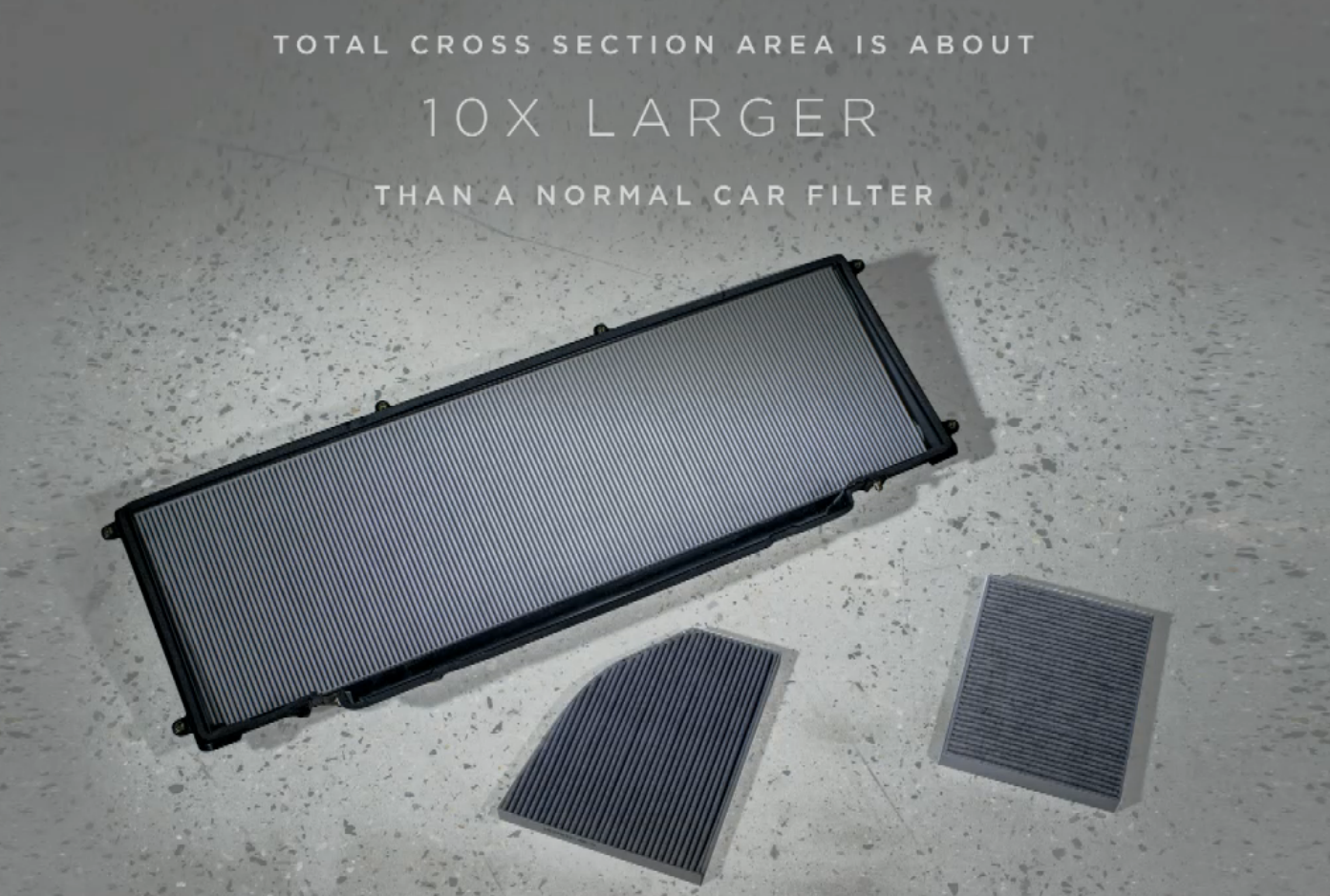 It comes at a price though. It is part of the $3,500 “Premium Upgrades Package”, which also includes more leather trims, LEDs, power lift-gate and ventilated front seats.

The company tested the system by placing a vehicle in a large bubble with polluted air (pictured above):

“A Model X was placed in a large bubble contaminated with extreme levels of pollution (1,000 µg/m3 of PM2.5 vs. the EPA’s “good” air quality index limit of 12 µg/m3). We then closed the falcon doors and activated Bioweapon Defense Mode.”

Here’s what happened after it was activated:

There are clear health benefits to not breathing pollution, but Tesla attempted to quantify them using data from the World Health Organization. Where pollution is the most dangerous, using the system could potentially add to your life expectancy:

Tesla President of Global Sales and Services, Jon McNeil, made a relevant comment in a recent interview in Hong Kong:

“There are concerns about vehicle emissions worldwide and here in Hong Kong about 122 people died in automobile accidents last year and over 2,000 died of auto emission-related lung diseases. So the tailpipe emissions of the car is actually 25 times more lethal than the car itself. For that reason, I think we are going to see pure electric vehicle demand increase. Policymakers want that to open and every one of us who breathe air wants that to happen.”

People are really starting to be aware of those issues with the recent steps that cities are taking. Electric vehicle makers should really look into similar improved air filtration systems and market those features as their vehicles addressing air pollution both offensively by providing transport without tailpipe emission, and defensively, by directly protecting passengers from those emissions.