Tesla issued a voluntarily recall today for a few thousand ‘Mobile Connector Adapters’ after two customers using NEMA 14-30 charging adapters reported that the device overheated. To be clear, we are not talking about the actual chargers here, neither the Tesla Wall Connector nor the mobile charger itself, but the wall connector adapter for the mobile charger. None of these adapters come standard with a Tesla or charger—they are add-on adapters that allow owners to use jacks other than the NEMA 14-50 standard that Tesla and other EV manufacturers have adopted for 240 volt charging.

It will only affect a small fraction of current Tesla owners who opted to retrofit their chargers to existing plugs.

The two separate incidents happened last month and resulted in the adapters partially melting due to overheating. No one was injured. The customers simply sent the devices to Tesla. The company investigated the devices manufactured by a supplier and decided to recall them.

The NEMA 14-30, 10-30 and 6-50 adapters are affected. The incidents only happened with the 14-30 adapter, which Tesla will be able to replace “within the next couple of weeks,” but the other two adapters have “some common elements” and Tesla doesn’t want to take any risk.

The 10-30 and 6-50 adapters, which are less commonly used adapters among Tesla owners, will take “about three months to develop and manufacture” according to Tesla. They are no longer for sale on the company’s website.

Tesla vehicle owners using the device are asked to use alternative modes of charging in the meantime, but considering the risks are very low, they can also keep using the adapters if they don’t have access to a Tesla Wall Connector or Supercharger.

Tesla owners can check their serial number on the company’s website to see if they are affected, but for the most recent NEMA 14-30 adapters, they can simply look at the plastic cap. If it’s gray (on the right in the photo), rather than a black plastic cap (on the left in the photo), it’s an adapter purchased after Tesla changed suppliers and therefore, it should be OK: 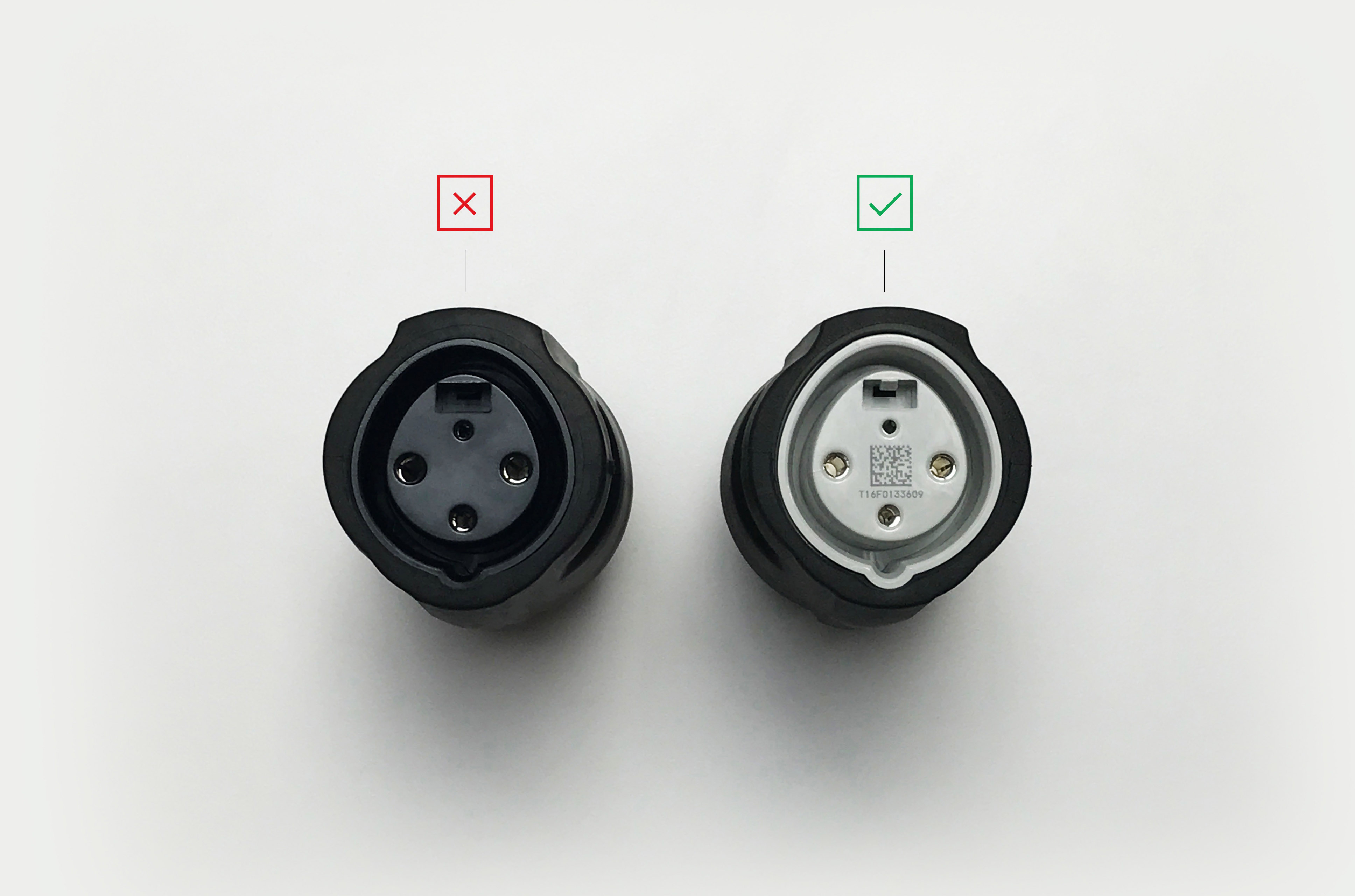 Tesla has been known to take a proactive approach with voluntarily recalls – meaning pushing fixes despite not being asked by regulatory agencies like NHTSA. For example, Tesla issued a voluntarily recall last year just to check for a possible defect with the front seat belts despite no reported accident.

The company performed the test at Supercharger stations while customers were charging.

Nonetheless, NHTSA was informed today after the company’s decision and Tesla will go through the regular recall process.

The company sent out the following email to the affected customers:

Update: Your Tesla Mobile Connector Adapter
Because safety is our top priority at Tesla, we want to inform you of an action we’re voluntarily taking to recall a small number of charging adapters.
.
This recall does not involve the Tesla Wall Connector, Universal Mobile Connector, or the NEMA 14-50 or 5-15 adapters that came standard with your Tesla and that most of our customers use for charging. It only involves NEMA 14-30, 10-30, and 6-50 adapters, which are sold separately as accessories and which are used by relatively few of our customers.
.
In November 2016, we learned about two customers whose NEMA 14-30 charging adapters overheated. These are the only two such incidents that we know of anywhere in the world and neither resulted in any injuries or property damage. However, out of an abundance of caution, we’re replacing NEMA 14-30, 10-30 and 6-50 adapters that were made years ago by our original supplier.
.
If you have one of these NEMA 14-30 adapters and regularly use it, you will receive a replacement from us within the next couple of weeks. Until then, we ask that you stop using your current adapter, and that you instead charge your car in a different way, such as with a Tesla Wall Connector or NEMA 14-50 adapter (if you have one), or by Supercharging.
.
Although there have been no incidents with NEMA 10-30 or 6-50 adapters, they have some common elements with the NEMA 14-30, so we will be replacing those as well. These replacements will take about three months to develop and manufacture. In the meantime, since none of these adapters has ever overheated, you can continue to use them if you do not have another way to charge your car.
.
For more information, including pictures of the relevant adapters, FAQs, and other details related to this recall, please visit the Recall Information page. If you need additional assistance, you can also contact us by phone at  877-798-3752 or by email at ServiceHelpNA@teslamotors.com.
.
Thank you for being a Tesla owner. We apologize for this inconvenience.