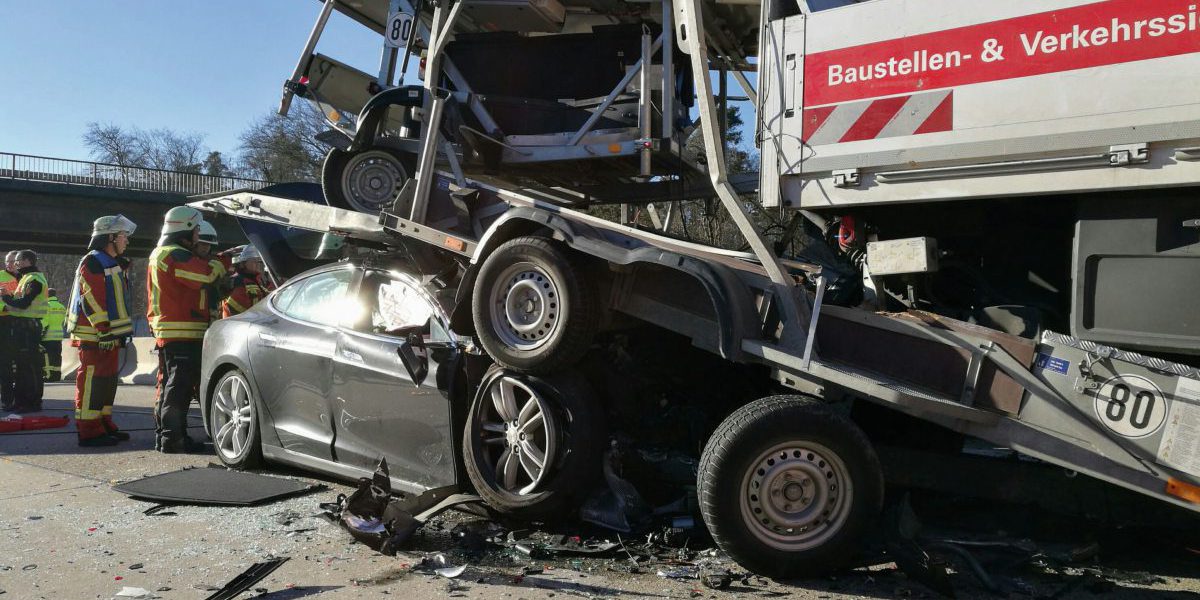 Earlier this week, the fact that the Tesla Model S broke the machine used to test the roof structure of cars during a round of tests by US regulators came up again on social media despite having happened over 3 years ago. Coincidentally, a Model S owner put the roof to the test today in an unfortunate real world scenario when he crashed into a truck on the Autobahn in Germany.

The Model S lodged itself under the truck and despite the severity of the impact, the driver reportedly was able to get himself out of the car and walk to safety – though his injuries were described as “serious,” but not critical.

The vehicle crashed into a truck used to shield a construction site that a company was about to set up. The speed of the Tesla at the time of the impact was described as “tremendous” by a local news report, which is not uncommon on the German Autobahn where speed is mostly unrestricted.

The details of the circumstances of the crash are scarce based on the current reports, but the main theory is that the driver was unable to merge into the right lane soon enough to avoid the truck.

The Bruchsal fire brigade arrived and secured the scene quickly. They reached out to Tesla’s technical support to make sure to deal with the electric vehicle properly, but the battery pack appeared to be mostly intact and didn’t catch on fire, so they simply dug the car out from under the truck in order to tow it.

It resulted in some spectacular pictures of parts of the truck sitting on top of the Model S (pictures by EM via Badische Zeitung):

After the release of the Model S’ crash test results in 2013, Tesla announced that the vehicle broke the testing machine:

“Of note, during validation of Model S roof crush protection at an independent commercial facility, the testing machine failed at just above 4 g’s. While the exact number is uncertain due to Model S breaking the testing machine, what this means is that at least four additional fully loaded Model S vehicles could be placed on top of an owner’s car without the roof caving in. This is achieved primarily through a center (B) pillar reinforcement attached via aerospace grade bolts.”

While most of the news reports about Tesla crashes have revolved around the Autopilot, they are rarely about the cars’ passive safety features, which have been credited by owners involved in spectacular accidents for saving their lives.