Tesla has yet to disclose the battery pack options that will be available for the upcoming Tesla Model 3 and enabled through the new battery architecture of the vehicle. Tesla’s Vice-President of Investor Relations, Jeff Evanson, previously said that the base version with “more than 215 miles of range” will be equipped with a battery pack “smaller than 60 kWh”, but we do know that better options will also be available.

In a recent presentation he gave last month at the National Entrepreneur Week in Mexico, Tesla CTO JB Straubel elaborated on the improvements made in battery technology and quantified it  – saying that Tesla has seen a 30% improvement in energy density between the Model S and Model 3.

Tesla officials have often discussed a 30% figure when talking about the batteries to be manufactured at the Gigafactory, but it was always in reference to the cost reduction associated with the batteries and not necessarily improvements in the energy density of the cells.

Now Straubel makes a direct link between cost reduction and energy density during his latest presentation:

“One of the not very intuitive, maybe not common sense pieces of this is that as you increase the energy density of the battery, you are also reducing the cost. Because in really high volume, things tend to cost about the same as they weigh. You can essentially look at the raw materials that go into the battery and how much those weigh – and that tends to be what define the cost.

So if you want to reduce the cost, the best way to do that is to use fewer materials. And if you do that, you just increased energy density.  That’s a key feedback that is very helpful and it is actually happening.”

He shared the following slide during those remarks: 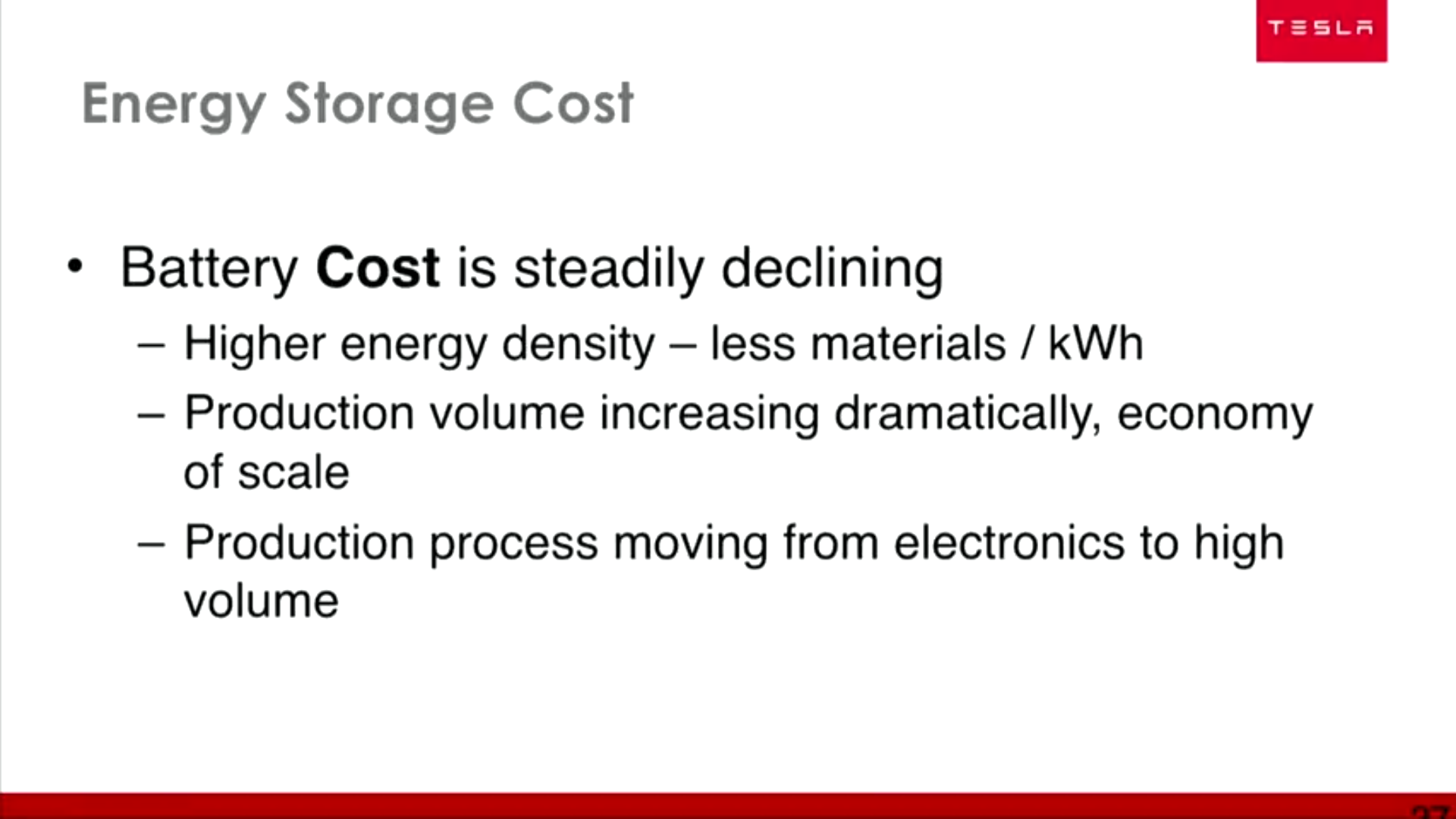 Straubel continued by explaining that “battery breakthroughs are not really needed and that constant improvements are already making the difference:

“These batteries are steadily improving every single year – maybe around 5% improvement in their energy density their ability to store energy in a given amount of mass. That’s probably one of the key metrics we worry about. And when we went from the Roadster to the Model S, they have improved by about 40% and when we were designing the Model 3, they were about another 30% better. That improvement just continues on every single year in the background.”

The first consumer vehicle application of this 30% improvement will be seen in the Model 3 as Straubel remarks, but we are already seeing the impact of improved energy density in other products Tesla recently released.

That’s a 136% increase of energy density at the battery pack level in just over a year. Of course, the cost is a more important factor than weight for stationary energy storage like the Powerpack, but as Straubel pointed out, cost and energy density are directly linked in Tesla development of battery technology.