Solar thermal + storage is trying to come to the United States in form of the largest solar power plant in the world. SolarReserve has proposed a 2GW Solar Thermal + Molten Salt power plant for the State of Nevada.

The company has already built a smaller version of this plant. The new plant, ‘Sandstone Energy X’, will be built for $5 billion including the molten salt storage. This would make Sandstone Energy X among the lowest priced electricity generators on the planet.

As reported by the Reno Journal Review, SolarReserve is looking to build a 25 sq mile solar power plant on federal land in Nye County. The power plant would use greater than 100,000 heliostats to heat ten 640 foot towers. Over 3,000 people would be employed in construction for seven years. 700,000,000 pounds of salt will be used as the energy storage medium. The system, if a linear scale from the Crescent Dunes project, will produce greater than 9,000,000 MWhs of electricity – enough to meet 25%(!!!) of Nevada’s annual use. Experts expect a lot of that electricity to flow over the nearby border to California which is already awash in cheap solar but could take advantage of the molten salt’s 24-hours of generation. With a capacity factor of 51.9%, this solar + storage power plant is equivalent to a 1.15GW Nuclear Power plant.

The 2,000MW Sandstone Energy facility will be more than 18 times larger than the prior built Crescent Dune facility. Over the course of a 25 year power plant life – it will produce 227 billion kWhs. At an expected cost of $5 billion, making use of the 30% federal tax credit, this system can be expected to generate electricity at a cost of 2.8 cents/kWh (per this tool – my assumptions below).

Each of the ten towers will be surrounded by a 1-mile circle of mirrors needed to heat the salt to greater than 1,000 degrees Fahrenheit. The superheated salt is melted and circulated through a closed loop system. The stored heat is used to create steam that drives power turbines.

There are many challenges to overcome. What will it cost to built transmission lines? The 25 square mile project will be under intensive pressure from environmentalists to be very conscious of endangered species. Prior challenges involving bird deaths due to the very intense heat created by collecting sunlight (cool video) have mostly been solved. Financing a $5B project that is three times the size of the next largest will involve a lot of trust and lawyers. A seven year expected build time starts to feel like nuclear power development, and with Solar PV prices falling so fast the market might pass right by this price.

Very recently a little farther out and quite often, Concentrated Solar Power (CSP) – as this power plant is defined within the industry, has been proclaimed dead. These proclamations seem at odds with this project and Brightsource, SolarReserve competitor, rolling out significant deals in China. 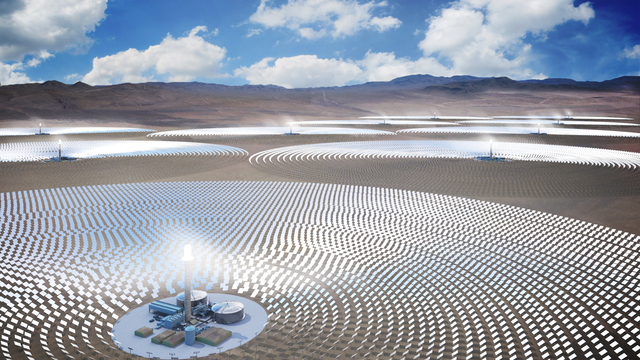