As speculation continues ahead of Tesla’s upcoming mystery product announcement, CEO Elon Musk now says that the unveiling has been pushed to Wednesday, October 19 citing the need for a few more days to “refine” the product.

It’s still not clear what the announcement will be about – hence why we are referring to it as the “mystery announcement”.

Musk previously said that the “product unveiling”, which he only described as “unexpected by most”, would happen on Monday, but it now has been delayed by two days.

He disclosed the change through his Twitter account on Sunday evening less than a day before the planned event:

Moving the Tesla announcement to Wednesday. Needs a few more days of refinement.

Last week, we polled our readers with a few possible options for the last minute event and most people believed it would have to do with Autopilot 2.0 or Tesla Vision with ‘Tesla Glass‘ coming in second: 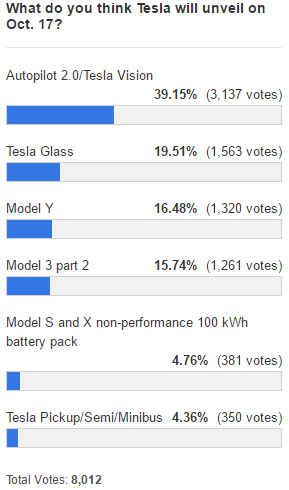 I don’t see how the news of a two-day delay and the need for “refinement” can give us any more indication as to what the product can be.

Earlier today, Tesla launched the latest round of its referral program and added a prize called “a set of custom Tesla over the ear headphones”, which added to the speculation about the scope of how “unexpected by most” the product could be.

Of course, it’s unlikely that Tesla would be launching its own set of headphones since it’s completely outside of its mission to accelerate the advent of sustainable energy (unless any of you guys can reconcile that), but the fact that it could even be considered a possibility beautifully illustrate the mysterious nature of the upcoming product launch.