After the update on Tesla’s challenge of direct sales law in the Utah Supreme Court earlier this week, we have another development in Tesla’s fight to sell its vehicles directly to consumers. In order to promote a new legislation to allow Tesla to sell its vehicles without having to go through third-party dealerships, as the law forces automakers to do in Michigan, Tesla owners are giving test drives circumventing the ban.

In the past, Tesla has been known to rally its customer base and EV enthusiasts to contact their representatives in order to help push new legislations allowing the automaker to sell its vehicles, or in some cases, to block new laws to stop Tesla from selling its vehicles.

But in this case, in Michigan, some Tesla owners created their own group, the Michigan Freedom to Buy Coalition, in order to promote new legislation to allow Tesla to sell its vehicles without having to go through the traditional third-party franchise dealership.

The group formed last year, not long after Michigan clarified its restrictions on direct car sales. In October 2014, Michigan Governor Rick Snyder signed a bill, which was initiated by the Michigan Automobile Dealers Association, to “clarify” an existing law banning automakers from owning or operating car dealerships in the state, ultimately forcing them to go through a third-party franchise model.

Now a new legislative effort has been proposed by Rep. Aaron Miller, R-Sturgis, in February and it would undo the law passed in 2014. His bill 5312 would allow automakers to directly sell vehicles to consumers.

Tesla applied for a car dealership and repair license in Michigan on two occasions over the past year, but it still hasn’t been approved and the application is at a standstill at the Secretary of State’s Office.

The company was considering to go to court in order to challenge law. Tesla General Counsel Todd Maron said in May:

“It is a very important state. Whether it’s through the Legislature or the courts, one way or another, we’re determined to do whatever we need to do in order for justice to prevail and serve our customers in Michigan.”

Even though Tesla doesn’t operate any store or service center in the state, the automaker reportedly already has over 400 customers. Tesla owners have to go to Chicago or Cleveland for service or use Tesla’s roadside assistance. 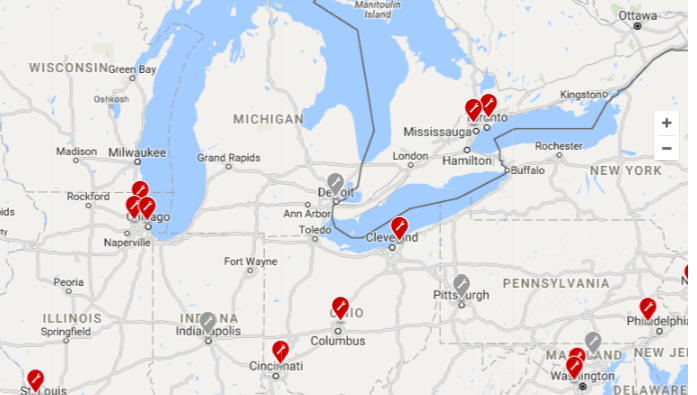 The automaker is committed to quickly open a service center in Detroit once they are allowed to, as you can see on the map above.

“We have this archaic law that prevents them (Tesla) from selling here,”

“I don’t understand if somebody wants to buy a product why the government should decide who they need to buy it from,”

The Michigan Automobile Dealers Association is strongly opposing any legislation that would allow automakers, including a company like Tesla that never had a franchise dealership, to sell cars directly to consumers in the state. Terry Burns, executive vice president of the association, commented in the news report:

“It has worked well for many, many years for every manufacturer in the world that has wanted to sell vehicles in the United States and specifically in Michigan,”

Tesla has made its position on franchise dealerships clear. The company argued that it wouldn’t thrive under a franchise dealership model because independent dealers make most of their profit from servicing cars while electric cars have little long-term maintenance and fewer moving parts.