Tesla Model 3 build plan is ambitious, but not impossible since Chinese automakers already did it [Report]

Tesla is betting big on the Model 3. The company recently closed an important $1.7 billion stock offering to finance its new build plan for the vehicle and $1.26 billion will be spent on the expansion of the Fremont Factory to manufacture the car in volume. The higher than expected demand for the Model 3 pushed Tesla to accelerate its production plan which now aims to achieve a rate of 500,000 cars (S, X and 3) in 2018 – two years earlier than previously planned.

The plan has been described by experts as anything from ambitious to impossible, but a new report by Cairn ERA, a global research and consulting firm specializing in energy storage, gives an interesting new perspective on Tesla’s production plan based on the recent rise of Chinese automakers.

The report explores the parallels between the Chinese car market, which has grown from 1.4 million cars sold in the year 2000 to a record 24 million passenger cars sold in 2015 with almost all of those cars being domestically manufactured, and Tesla’s plan to go from ~600 vehicles manufactured in 2010 to 500,000 vehicles in 2018.

Sam Jaffe, Managing Director at Cairn ERA, describes his conclusion based on the report in an email to Electrek:

Based on our analysis, three of the top ten car companies in China reached or exceeded the growth rate that Tesla will need to reach over the next three years. We think the most likely scenario is for Tesla to produce 450,000 cars in 2018.

While some of China’s automakers have outpaced the growth rate required for Tesla to achieve 500,000 units in 2018, Jaffe remains more conservative since the average growth of the ten domestic and non-joint-venture companies is 85.9% and if applied to Tesla, it would result in the production of 340,000 cars in 2018. He states that 500,000 vehicles in 2018 is still “plausible, if aggressive”.

“It is not the most likely scenario, however. The reason is the nature of the product. The Tesla Model 3, which will comprise the majority of Tesla vehicles manufactured in the year 2018, is a significantly cheaper car to assemble than any of the Chinese cars made by the ten automakers surveyed in this study. Tesla has revealed that there are approximately 8,000 discrete parts in a Model 3. Any internal combustion vehicle, even the cheapest sub-economy model, will have at least 20,000 discrete parts. An internal combustion engine (ICE)-based drivetrain is and always will be dramatically more sophisticated and complex than any electric drivetrain vehicle.”

The report goes on to describe the rise of China’s domestic auto manufacturing industry. Here’s a visualization of the growth: 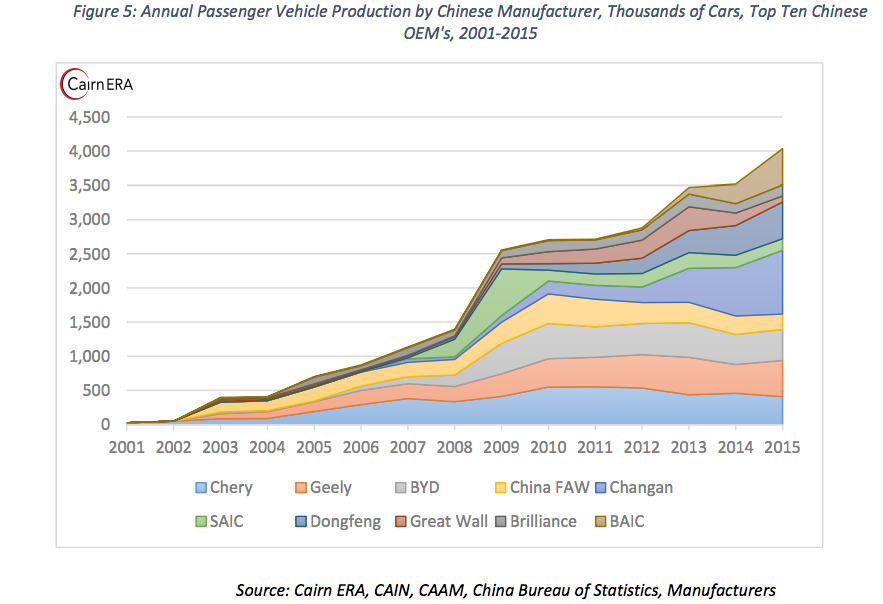 To get to a production rate of 500,000 cars in 2018, Tesla would actually have to grow at only 30% of the rate its Chinese peers were able to reach during their strongest three-year period of growth. It offers an interesting perspective.