If you read the headlines about Tesla’s plan to acquire SolarCity, you might think that the move is universally hated. The Globe and Mail wrote “Tesla stock plummets as planned SolarCity buy puzzles everybody but Musk ” – everybody but Musk? I wouldn’t be so sure.

Famed short seller Jim Chanos went on CNBC to call the deal a “brazen Tesla bailout of SolarCity”. Chanos has been shorting both stocks and he will not get to vote on deal. While he is entitled to his opinion and can try to influence shareholders, it will not have much impact at the end.

Other Wall Street personalities weighed in on the deal, like Jeffrey Gundlach, CEO DoubleLine Capital:

“This deal feels like Musk has lost his Midas touch. I also feel like Musk is trying to do too much,”

But DoubleLine Capital doesn’t own shares of Tesla. Here’s an overview of the main shareholders of both Tesla and SolarCity via Financial Times: 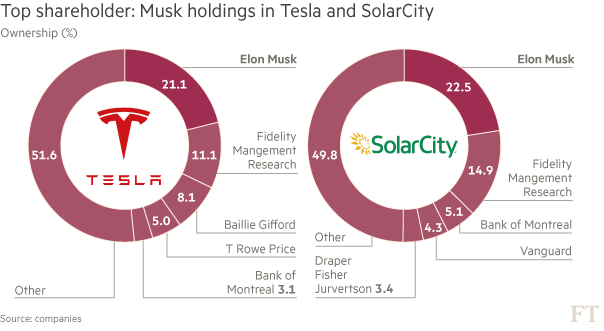 Elon Musk, the largest individual shareholder of both companies, decided to recuse himself from voting his shares at both companies and leave it to Tesla and SolarCity shareholders. Though he made it clear that he is backing the deal and even called it a “no-brainer”.

It leaves the decision to individual and institutional shareholders. It will be difficult to predict the vote of individual shareholders, but we published an admittedly unscientific poll yesterday and it showed that most shareholders of both Tesla and SolarCity are in favor of the acquisition based on a sample of just over 2,000 people:

Now the institutional holders are easier to predict since they have only a few people managing the funds and you can get a sense of which side they plan on voting. Since Elon Musk is backing the plan, it basically comes down to the fund managers’ confidence in the CEO.

While Musk didn’t disclose the deal to any of the major investors until it was publicly announced this week, he did say that the idea has been part of discussions with some of the largest shareholders in the past.

You can find a full list of top TSLA institutional and mutual fund holders below, but here are a few who commented on the announcement of the deal – though most didn’t want to outright say which way they are voting.

Joe Dennison, a portfolio manager of Zevenbergen Capital Investments, which has about 600,000 Tesla shares, commented on the acquisition plan to Reuters:

“It’s a natural evolution of their mission to transform transportation into a sustainable business […] We expect it to go through and believe that most investors who actually own the stock understand management’s long-term vision for the company.”

Another interesting aspect is that a lot of Tesla shareholders already own SolarCity shares, which could facilitate the deal. The number is estimated at 45% as Reuters reported after talking about Fidelity, which is a major shareholder of both companies and looks to bein favor of the deal:

“The manager of the second largest mutual fund investor in Tesla, the $12 billion Fidelity OTC Portfolio, which is also the largest institutional holder of SolarCity, praised a tie-up in comments earlier this year.

“We remain fans not just of Tesla products, but of the concepts and potential future partnerships behind the company. We foresee fruitful synergies between say, Tesla and SolarCity – or any company that can benefit from superior battery technology,” Gavin Baker, who runs the Fidelity OTC fund, said in his first-quarter commentary for investors. It owns 2.1 percent of shares.”

Finally, Baillie Gifford, the second largest institutional holder after Fidelity, is not completely sold on the deal and plans to meet with management to discuss it, but James Anderson, the head of the Edinburgh-based group’s long-term global growth team, reiterated his confidence in Musk and said that he was not necessarily opposed to the deal.

Yesterday, the first trading day after the announcement of the offer, Tesla’s stock price fell ~10%. Investors unhappy with the deal are already leaving, but based on the comments from major long-term holders, it looks like the deal will go through and Tesla will be on its way to become a major energy company rather than an automaker.