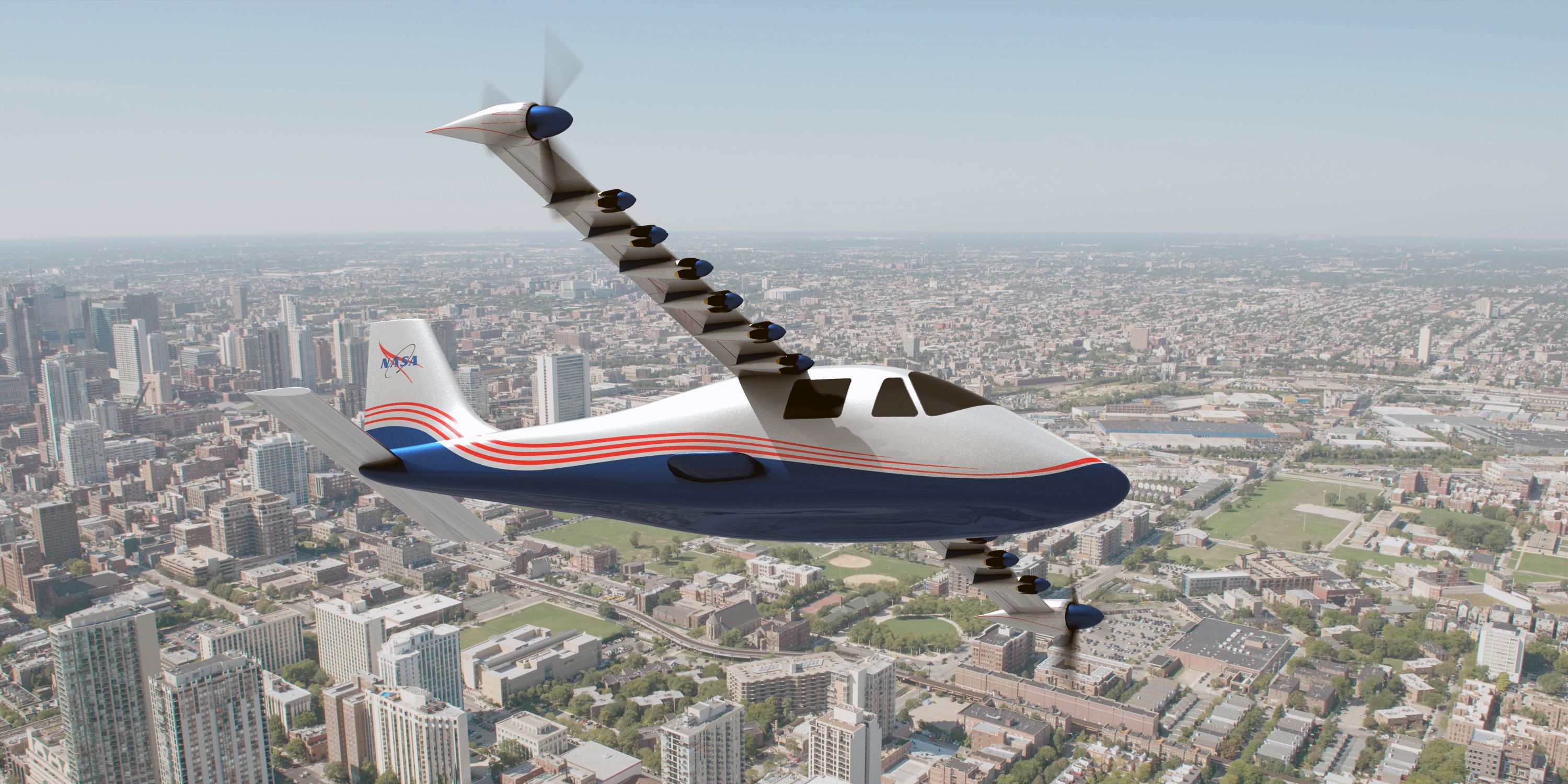 NASA today unveiled plans to spend the next decade working on electric planes under the ‘X-57’ moniker. The X-Plane program has traditionally been used by NASA to further aviation so this is a big deal more than just a pet project or some 3D renders. 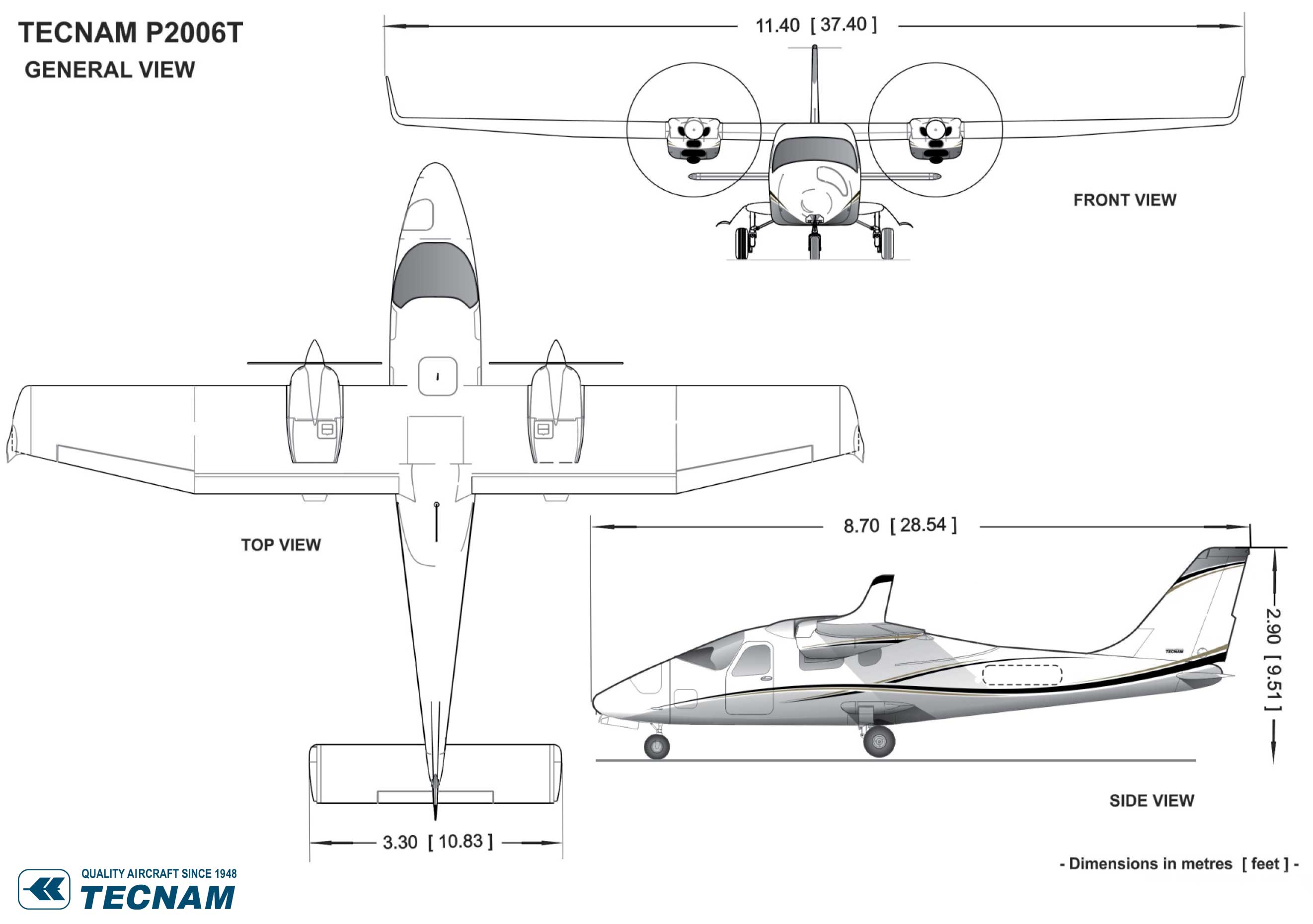 The plane which is also called ‘Maxwell’ to honor James Clerk Maxwell, the 19th century Scottish physicist who did groundbreaking work in electromagnetism, will be based on the Italian Tecnam P2006T, a very efficient 4 seat light aircraft (pictured above). NASA will do away with the wing and petrol engines and replace them with a super-efficient thinner wing and 14 electric motors. The smaller 12 motors will only be used for takeoffs and what we can probably assume is regen during landings. The larger 2 engines on the end of the wings will propel the plane during cruising which is expected to be a solid 175mph. The Tecnam has retractable wheels and a 1500-foot take off distance which should make it a good base for an EV makeover.

There are a lot of things to unpack here…

First of all, Electric air flight isn’t entirely new.  Tesla’s CEO and CTO Elon Musk and JB Straubel met over lunch a decade ago and their first discussion was electric planes. On numerous occasions, both have discussed electric flight as the next frontier. Alphabet CEO Larry Page is investing in two electric airplane startups.

Airbus, the European multinational aerospace and defence corporation, has its electric e-Fan project well off the ground so to speak. It is a much smaller 2-seater meant for pilot training, not transport, and recently crossed the English Channel in a publicity stunt which you can watch below.

Although Airbus made claims as the first electric plane to cross the channel, it has been done a number of times including a solar-powered (without batteries!) traversing by Paul MacCready and the Aerovironment team‘s Solar Challenger way back in 1981.

A number of other Electric airplane outfits already exist (here’s a big list)  so it will be interesting where NASA thinks it can innovate. It has some pretty insane goals:

The target NASA had in its sights seemed impossibly distant, and yet it required the designs to be flight-ready in five years (by 2020). NASA’s design objective for the competition was a four-seat airplane with a range of 800 nautical miles (921 statute miles, or 1,482 km) and a cruising speed of 175 knots (equal to 201 mph, or 323 km/h). And while most designers might scoff at such a challenge, seeing these specs as completely normal, the goals were more than seven times as far and twice as fast as the brand new Pipistrel Alpha Electro electric airplane could go. Quick math shows that the NASA performance targets demand about 30 times as much energy as the Pipistrel is capable of providing. What could change so drastically in five years so as to allow that?

A month ago we were intrigued by this discussion of a Fuel Cell airplane that was designed for NASA by Tom Neuman responsible for the above and below quotes. .

At the time, electric flight was becoming an increasingly reasonable proposition as lithium-ion batteries became lighter and cheaper. Flying with electric motors made the planes cleaner, quieter, and easier to operate. Still, the technology available in 2008 would have limited pilots to flights of a few minutes. Similar considerations applied to Tesla’s first car: It offered some compelling advantages, but it couldn’t go nearly as far as its gasoline-powered counterparts.

Since then, battery technology has improved to the point where all-electric cars have become an established niche: Nissan introduced the mass-market Leaf at the end of 2010, and Tesla has increased the size of its flagship automobile from the two-seat Roadster to the five-seat Model S. Electric planes have also benefited from these battery advances. In the past two years, both Pipistrel, the Slovenian light-aircraft manufacturer, and Airbus SAS, based in France, have introduced electric two-seat trainers.

While the range of electric aircraft has been growing, limited flight time remains their main weakness. The reason is that batteries are heavy relative to the propulsive energy they provide—by a factor of 10 or more compared with that of gasoline-powered internal combustion. For ground vehicles, designers can compensate somewhat for this shortcoming by adding more or bigger batteries. But aircraft are extremely sensitive to extra weight: Just about every component of a plane’s structure must grow in size for each added kilogram. The requirement for beefier components in turn leads to a heavier aircraft, one that requires still more energy and therefore larger batteries to fly. This vicious circle means that for electric-plane design, adding batteries to boost range isn’t a viable strategy.

One thing that comes to mind for me is that most of the energy needed for flight is for takeoff and ascent, and a lot of innovation can happen here (NASA’s answer seems to be throwing 12 smaller EV props at the problem). While some suggest a petrol motor for takeoff, I wonder if either a railgun at the airport (like on aircraft carriers), winch launch or a ground vehicle-assisted takeoff  (video) could save battery power.  Clean energy could get the electric planes to 2000 feet and cruise speed before the electric engines are even turned on, saving tons of energy and essentially adding a great deal of cruise range.  Eliminating the takeoff would also require fewer engines and propellers which would also reduce the weight and drag.

Interestingly, once you begin the descent to your airport destination, most planes are actually energy positive so you could theoretically run out of electric power in the air and still (re)generate enough on the way down to your runway to power maneuvering during landing and taxiing.

As an amateur pilot and solar/EV enthusiast, I am (and we here at Electrek are) obviously interested in the emerging field (we’ve got to do something after all cars have gone electric obviously!) so expect much more coverage of the Electric plane and transportation industry.

With 14 electric motors turning propellers and all of them integrated into a uniquely-designed wing, NASA will test new propulsion technology using an experimental airplane now designated the X-57 and nicknamed “Maxwell.”

NASA Administrator Charles Bolden highlighted the agency’s first X-plane designation in a decade during his keynote speech Friday in Washington at the American Institute of Aeronautics and Astronautics (AIAA) annual Aviation and Aeronautics Forum and Exposition, commonly called Aviation 2016.

“With the return of piloted X-planes to NASA’s research capabilities – which is a key part of our 10-year-long New Aviation Horizons initiative – the general aviation-sized X-57 will take the first step in opening a new era of aviation,” Bolden said.

As many as five larger transport-scale X-planes also are planned as part of the initiative. Its goals – like the X-57 – include demonstrating advanced technologies to reduce fuel use, emissions and noise, and thus accelerate their introduction to the marketplace.

The X-57 number designation was assigned by the U.S. Air Force, which manages the history-making process, following a request from NASA. The first X-plane was the X-1, which in 1947 became the first airplane to fly faster than the speed of sound.

“Dozens of X-planes of all shapes, sizes and purposes have since followed – all of them contributing to our stature as the world’s leader in aviation and space technology,” said Jaiwon Shin, associate administrator for NASA’s Aeronautics Research Mission Directorate. “Planes like the X-57, and the others to come, will help us maintain that role.” 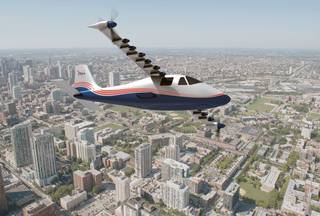 NASA researchers working directly with the hybrid electric airplane also chose to name the aircraft “Maxwell” to honor James Clerk Maxwell, the 19th century Scottish physicist who did groundbreaking work in electromagnetism. His importance in contributing to the understanding of physics is rivaled only by Albert Einstein and Isaac Newton part of a four-year flight demonstrator plan, NASA’s Scalable Convergent Electric Propulsion Operations Research project will build the X-57 by modifying a recently procured, Italian-designed Tecnam P2006T twin-engine light aircraft.

Its original wing and two gas-fueled piston engines will be replaced with a long, skinny wing embedded with 14 electric motors – 12 on the leading edge for take offs and landings, and one larger motor on each wing tip for use while at cruise altitude.

NASA’s aeronautical innovators hope to validate the idea that distributing electric power across a number of motors integrated with an aircraft in this way will result in a five-time reduction in the energy required for a private plane to cruise at 175 mph.

Several other benefits would result as well. “Maxwell” will be powered only by batteries, eliminating carbon emissions and demonstrating how demand would shrink for lead-based aviation fuel still in use by general aviation.

Energy efficiency at cruise altitude using X-57 technology could benefit travelers by reducing flight times, fuel usage, as well as reducing overall operational costs for small aircraft by as much as 40 percent. Typically, to get the best fuel efficiency an airplane has to fly slower than it is able. Electric propulsion essentially eliminates the penalty for cruising at higher speeds.

For more information about NASA’s electric propulsion research, go to: