For years now, Lit Motors has been developing its all-electric self-balancing two-wheel vehicles, often referred to as Auto-Balancing Electric Vehicle (AEV). It is described as an extremely efficient commuter vehicle thanks to its light weight, low mechanical drag with only 2 wheels touching the road and low aerodynamic drag because of its enclosed motorcycle shape.

The company announced having received over 1,000 reservations for the vehicle, but yet it can’t find its way to production. After several delays and despite backers like Mark Pincus, founder and CEO at Zynga, and Larry Page, founder of Google and CEO of Alphabet, the company is reportedly still looking for funding in order to bring the vehicle to production.

In the meantime, they are still working on new prototypes. CEO Danny Kim wrote in a letter to reservation holders yesterday:

“In addition to developing EP-5, we unlocked the doors to our storage facility and revived our beloved prototype EP-4 for dynamics testing. After installing a new custom battery pack, we are rediscovering all of the elegant, innovative solutions we made to this piece of engineering/design history. In the coming months, we hope to show new features in the balancing technology and new driving examples of David Bailey’s algorithms on EP-4. Later this summer, we will be offering to our pre-order community a technology test drive of EP-4 in San Francisco.”

In a conference in Germany last month, Kim said that the company is still looking for funding and that once they get about $20 million, he is confident they can get to production in about 24 months.

But unless the company can close the funding by the end of the year, it might be too late. A Chinese startup is coming after Lit’s market with little regard for IP. Beijing-based Lingyun Intelligent Technology (yes the acronym is ‘LIT’) is working on a similar battery-powered two-wheel drivetrain technology using gyroscopic torque to keep the vehicle in an upright position.

The company unveiled the vehicle at the Beijing Auto Show last month and the resemblance with Lit Motors’ AEV is undeniable:

It looks like the company already has the money to bring the technology to market and it aims to do it by the end of the decade.

A possible silver lining for Lit Motors, the Silicon Valley-based startup is promising much better specs than its Chinese counterpart. Lit is talking about ~150 miles (241 km) of range on a 10 kWh battery pack, while Lingyun listed the range of its concept at 62 miles (100 km) on a 3 kWh battery pack.

Lit also beats Lingyun on the estimated top speed with ~100 mph (160 km/h) versus ~62 mph (100 km/h). The Chinese startup didn’t disclose any pricing information, but Lit expects the first generation to go on sale for about $24,000.

Lingyun Intelligent Technology also plans to leverage the powertrain technology for other vehicles. It unveiled a larger car-like vehicle based on the same battery-powered gyroscopic torque two-wheel drivetrain at the Beijing Auto Show last month:

In any industry, competition is generally good, but in this case, I have to admit Lingyun’s design appear to be a blatant copy of Lit’s AEV concept. Hopefully, the startup can get its funding a get the concept to production. 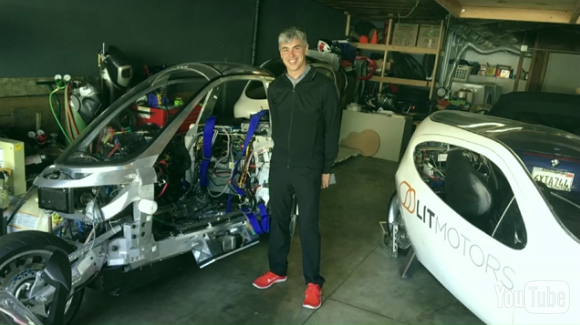 It was recently revealed that the billionaire has been pouring over $100 million in flying car projects in Silicon Valley over the past few years. Maybe he could invest a few millions to help Lit get the vehicle in the hands over 1,000 people who are already waiting for it…

Images via Lit Motors and Lingyun