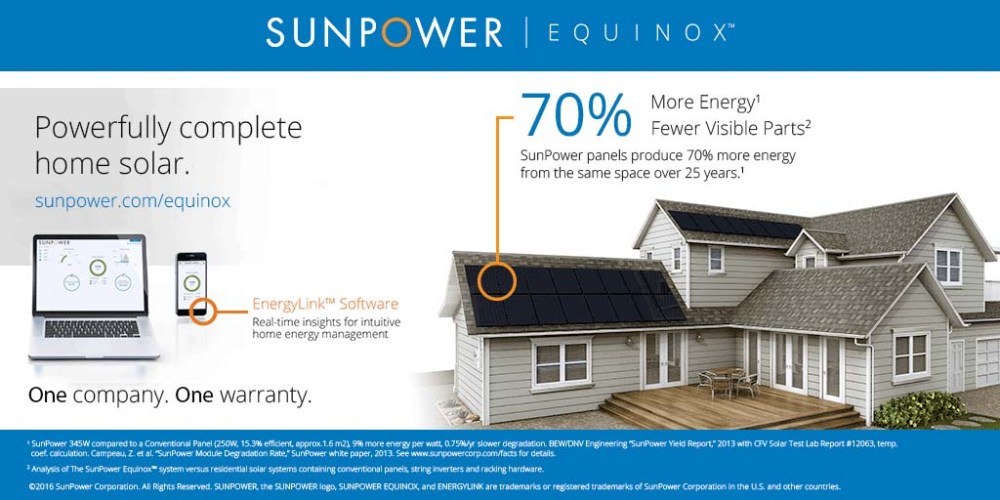 AT&T and SunPower are announcing the start of a new relationship – AT&T’s IoT (Internet of Things) expertise combined with the SunPower Equinox home solar and monitoring system. The intertwining of these two companies means AT&T will be able to show off its real time information communication skills while the SunPower Equinox system gets access to a redundant wired and wireless network infrastructure. Meanwhile, both companies get to market their products to the other’s residential customers…

AT&T and SunPower are leveraging this relationship to push further into strategic markets. AT&T has been developing the technology and infrastructure behind the coming Internet of Things (IoT) in hopes that the value of interconnection will push new market opportunities. Having a customer like SunPower, who itself has hundreds of thousands of residential customers, would allow a wide disbursement of this technology in a very important sector – managing the electricity grid. SunPower will gain access to millions of homeowners that are already using AT&T for communications – and they’ll be able to understand exactly how those systems are performing.

A key aspect of the SunPower Equinox solar system is that each solar module has a control system – a microinverter – that will provide up to the minute data on that solar module. If a customer’s solar system is performing lower than it should – then a technician can remotely diagnose the system, down to the individual module. Microinverters are allowing Enphase – the original microinverter manufacturer – to reprogram its Hawaiian microinverter fleet en masse, helping Hawaiian Electric ride through solar-influenced disruptions on the edges of its power network. SunPower, having a powerful network managed by AT&T, will be able to use the Equinox system to get much closer to the electric utilities, as the utilities work hard to integrate intermittent energy sources.

SunPower also has other reasons for a relationship like this – the competition for the highest quality solar modules is coming on hard, and investors are already paying attention. Late last year, SolarCity and Panasonic made announcements that they each, independently, had come up with modules with a higher efficiency than SunPower’s world leading product. SunPower did, of course, follow up with their own press release to officially edge out both of the newcomers. SolarCity and Panasonic are both larger companies than SunPower is – however – SunPower has been producing high quality modules for a very long time – and the industry trusts them. My office has 21kW SunPower modules on it.

Personally, I wonder if technology like this is going to make much of a difference other than pushing the industry further on a path it has already headed down. Most homes that have solar power already have high speed internet – so AT&T’s addition won’t exactly be a new venture. We’ve already got module level data – and as Enphase has shown – we have major utilities that are studying it. The reality of a relationship like this is more so marketing – AT&T gets to show off their technology and build it into hundreds of thousands of solar modules, while SunPower gets a chance to pitch millions of high speed AT&T internet customers. Win-win for corporate America – and if it gets more solar power installed, then win-win for the rest of us.