We’ve covered how Tesla’s approach to self-driving cars differs from Google’s. The former is incrementally introducing more advanced autonomous features to eventually get to full autonomy, while the latter thinks it is safer to make the jump to completely autonomous driving once the technology is at maturity.

The two companies also have different approaches to hardware. Google relies on LiDAR, while Tesla thinks it’s unnecessary and that a combination of cameras and radars should do the job. Only time will tell which strategy will turn out to be the most successful, but in the meantime, Tesla shared a rare data point that gives us some perspective on the two programs.

Unlike Tesla, Google shares monthly reports on its self-driving car program (please Tesla, take example). The company releases its cumulative miles driven on autonomous and manual modes, as well as accident reports (when there are any) and sometimes they write about new technologies they are implementing.

We often share those reports on Electrek and our sister-site 9to5Google. 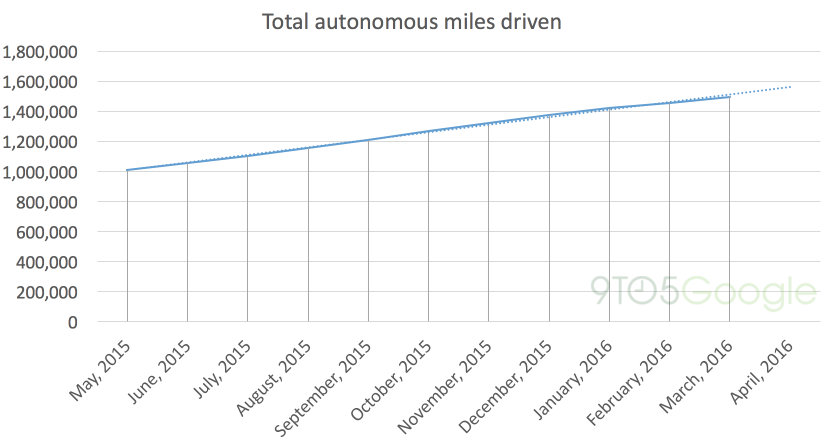 As you can see, it recently reached the 1.5 million miles mark last month. That’s since the beginning of the program in 2009.

While Tesla doesn’t share similar data for its Autopilot program, for some reason, over the weekend the company decided to release the total miles driven with Autopilot by its fleet since its introduction in October 2015.

The company confirmed that 47 million miles were driven while the Autopilot was activated. When first introducing the new features, CEO Elon Musk said that Tesla’s fleet was adding about 1 million miles of data every day, which indicates that the company might be pulling data even when the system is not actively controlling the car.

Of course, Google’s miles were city miles, while the Autopilot is for highway driving which gives a distinct advantage to Tesla in term of racking up data in miles. Although Google is lagging behind for real-world miles, the company is quick to add “simulated-miles” with over 3 millions a day, without leaving the lab.

They also pull data differently based on their hardware (LiDAR vs Cameras), but the main difference is that Tesla has about 70,000 vehicles equipped with Autopilot hardware on the roads, while Google currently operates only 54 prototypes. Google uses both its cute prototypes (picture above) and Lexus RX450h SUVs equipped with Google’s system. The vehicles are located in Mountain View, CA, Austin, TX, and Kirkland, WA. While Tesla’s fleet is spread out across the world.

It certainly makes for an interesting race to fully autonomous vehicles. Last year, Elon Musk said that he expects Tesla’s level-4 fully self-driving technology to be ready in about 2 years, while Google is vague about its timeline to bring its system to market, but it expects the cars will be on the road by 2020.

The Sooner the better. Just this weekend, we watched a Model S with Autopilot autonomously avoid a collision with a truck [Video].