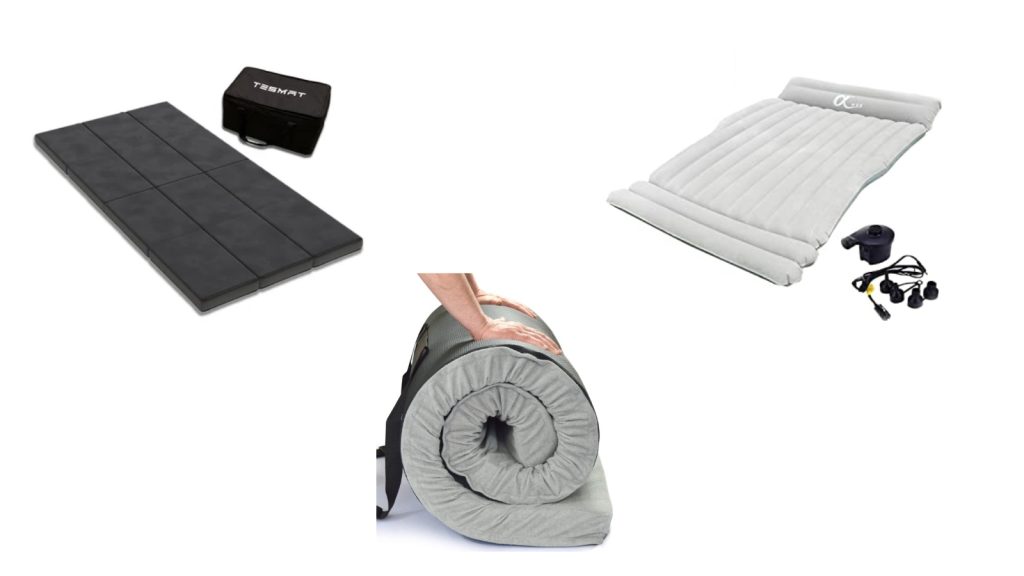 Teslas make great vacation and getaway vehicles, and regardless of what you’re driving, it’s impossible not to take a camping trip once in a while. But as many features as the Tesla has, it doesn’t have a built-in mattress. That’s where this list comes in. If you’re really into the Tesla fireplace/romance mode and want to take your Tesla to the next level for an overnight camping trip, these are some great options for your Model 3, Model Y, and other Tesla models.

Tesmat for Model 3 and Model Y

Electrek’s pick. A trusty mattress for your Tesla.

Use code electrekshop for $20 off!

There are many decent options for Tesla mattresses, but none we found to be as good as the Tesmat. This one is made by Tesla owners for Tesla owners. That means this thing is made specifically to fit your Model 3 or Model Y.

The Tesmat is 3 individual mats that make up one large, comfy gel memory foam twin-sized mattress, featuring ventilated 3D mesh fabric, an ultra-soft cover, zippered mattress covers, and a carrying case. This thing fits perfectly in the subtrunk with room to spare, and the carrying case even doubles as a cooler.

Tesmat’s attention to detail is its strong point — they’re mostly the same product for the Model 3 and Model Y, but the company has privacy screens for each model vehicle to fit to spec as well.

Best mattresses for all Tesla models

Another great mattress for those who want air!

The Tesmat is a great pick, but it’s a bit on the expensive side, and its biggest drawback might be that it’s a single slab of foam. Some prefer the mattress-in-a-box, but others might want to go with something a bit more flexible in firmness. The Basenor Tesla inflatable air mattress is a great pick for all Tesla owners, and it’s even a little cheaper than the Tesmat. The big downside, of course, is that it’s an air mattress. That means you could be fighting a long, losing battle against holes. One hole and it might become too frustrating to deal with.

Topfit sells another carbon-copy air mattress for Tesla vehicles, and it’s well-reviewed on Amazon. Like any air mattress, the possible downside is getting a hole. And of course, it does take a little time to blow it up properly. The Topfit has a different design for the head rests compared to the Basenor, making one large headrest that spans the length of the mattress instead of two separate ones for two people.

Not made for Tesla, but maybe all you need.

If you’re looking for a cheaper alternative to the Tesmat, this is the option for you. It’s not made specifically for Tesla vehicles, but it will fit inside, and like the Tesmat is rolls/folds up into a compact size that can fit snugly in your subtrunk for storage.

This mattress is not an air mattress, so it won’t have any problems with holes or losing air. It’s also flexible and could be used for many different purposes — not just Tesla camping. It comes in three sizes, all of which should fit comfortably in the back of your Model 3, Model Y, or other Tesla.