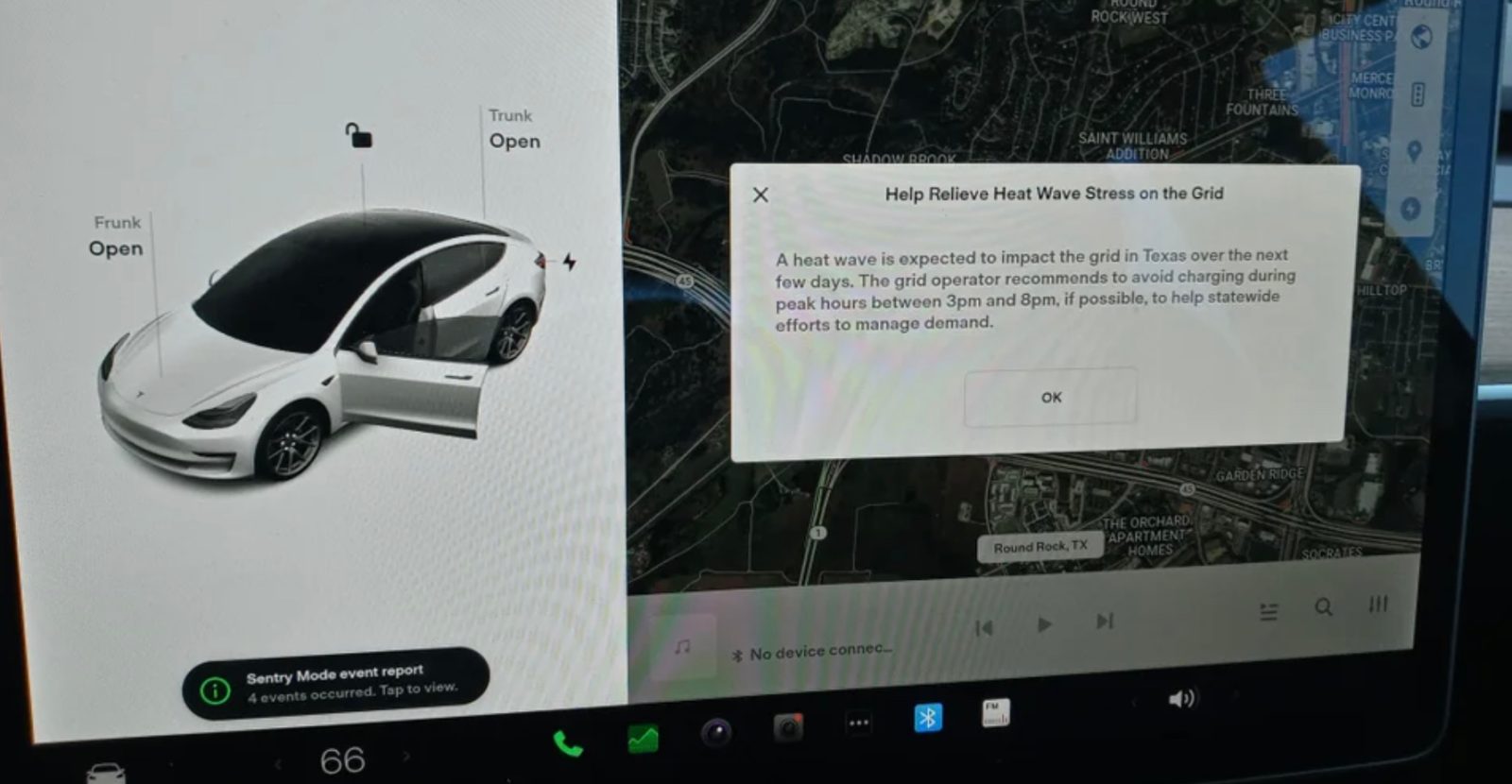 Tesla is trying to help the grid in its new home state of Texas as rising temperatures cause record electricity demand in the state.

The automaker is pushing a new in-car alert to encourage off-peak charging.

Texas has a notoriously fragile grid that is having issues supporting increasing peak electricity demand.

The issues have mostly come in the winter amid cold fronts, but the state’s electric grid is now not handling these early summer temperatures very well.

In a statement propagated yesterday, ERCOT commented asked Texans to limit their electricity usage between 3 p.m. and 8 p.m:

With unseasonably hot weather driving record demand across Texas, ERCOT continues to work closely with the power industry to make sure Texans have the power they need. This afternoon, six power generation facilities tripped offline resulting in the loss of approximately 2,900 MW of electricity. At this time, all generation resources available are operating. We’re asking Texans to conserve power when they can by setting their thermostats to 78-degrees or above and avoiding the usage of large appliances (such as dishwashers, washers and dryers) during peak hours between 3 p.m. and 8 p.m. through the weekend.

Interestingly, Tesla picked up the statement and shared the advice with its fleet of electric vehicle owners in Texas.

In a new in-car notification, the automaker recommended to owners not to charge during peak hours (via Karlan Mitchell on Reddit):

A heat wave is expected to impact the grid in Texas over the next few days. The grid operator recommends to avoid charging during peak hours between 3pm and 8pm, if possible, to help statewide efforts to manage demand.

While Tesla is most known in Texas for its Gigafactory in Austin and moving its headquarters there last year, the company also has important plans to help the electric grid in the state.

The company has deployed a big energy storage project made of 81 Megapacks, and it plans to deploy a lot more residential storage and solar.

Tesla is installing solar roofs and Powerwalls in new homes in a giant new residential project in Austin, Texas, and its energy division, Tesla Energy, is expected to do more on that front since officially entering Texas’ mostly deregulated energy market.