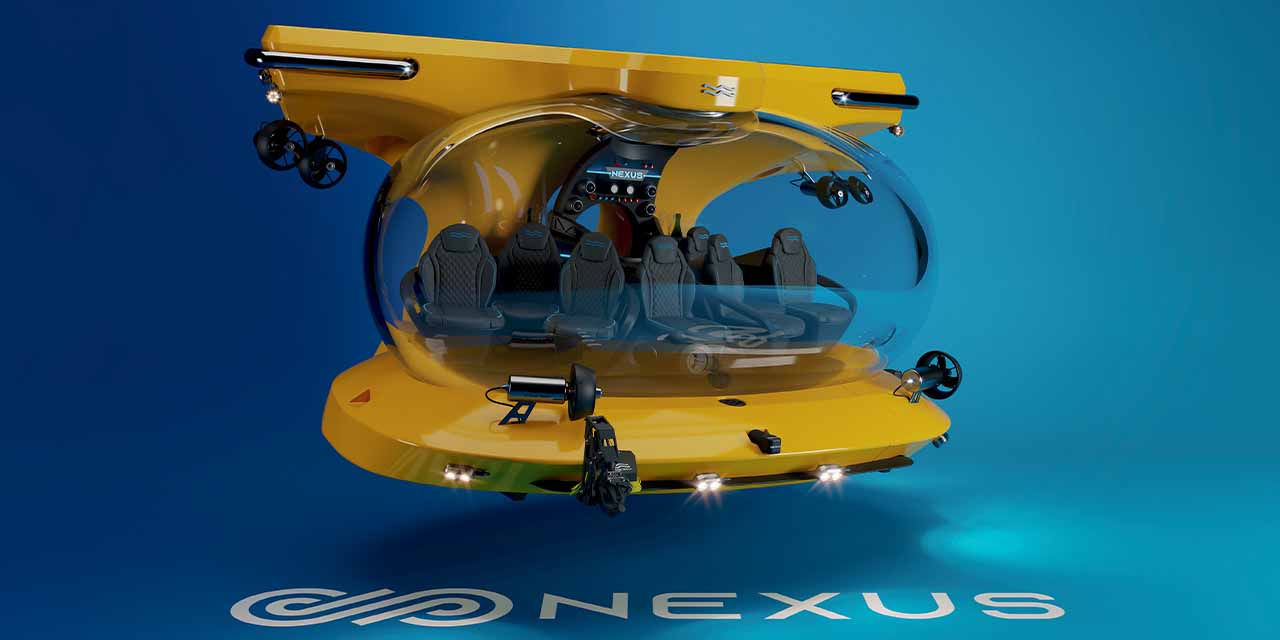 All-electric submarine manufacturer U-Boat Worx has announced its latest series of submersibles called NEXUS, comprised of seven- and eight-person vessels (nine if some are children). These electric submarines are powered by lithium-ion battery technology allowing them to operate for up to 18 hours and dive 10 times a day. In addition to providing eco-friendlier ocean exploration, they look cool as hell.

U-Boat Worx is a Dutch submersible manufacturer that began as a dream by founder Bert Houtman in the 1980s. The company is now one of the industry leaders in submarine design, more specifically, electric versions.

Since 2017, the electric submarine specialist has sold over twenty of its Cruise Subs to private customers, resorts, and cruise lines. U-Boat Worx currently offers six different series of submarines, all of which are electric. With the introduction of two versions of the NEXUS, the company now has its seventh series.

Taking a deep dive into the NEXUS electric submarine

Following a recent press release from U-Boat Worx and a conversation with their team, we have a bunch of cool details to share about the new NEXUS series of electric submarines, and what they can do.

The NEXUS series consists of two standard electric submarine models offering comfortable dives for six or seven passengers plus one pilot. U-Boat Worx is promoting the larger NEXUS sub as a nine-person vessel, but that includes six adult passengers, two children, and one pilot. Technically still nine people, but a little misleading. In reality, the NEXUS subs hold seven or eight adult passengers, including a pilot in each.

According to U-Boat Worx, both versions provide 25% more interior space than competitive submarine models and are depth rated to 200 meters (650 feet).

By utilizing lithium-ion batteries, the NEXUS subs can operate up to 18 hours, diving up to 10 times a day – that’s up to 80 passengers. We asked U-Boat Worx for more details about the battery cells it uses, but its representatives remained tight lipped to maintain a competitive edge in the space.

The NEXUS comes with a factory-supplied charger, requiring between six to eight hours to replenish its 62 kWh battery pack. Regardless of which battery cells are used, they power the new electric submarine’s omnidirectional maneuvers through 10 separate 6.4 kW propellers:

The ability to maneuver in any direction without compromise is a feature that helps set U-Boat Worx electric submarines apart from others. Here are some other unique features passengers will soon experience:

One feature we found interesting was the optional passenger elevator. We asked U-Boat Worx how it works and they described it as a powered platform that can lower and raise the passengers inside the electric submarine. Strategically placed handrails and grips help the passengers get on the platform and safely to their seats. This technology is present in other U-Boat Worx subs like the C-Researcher series which can be seen here.

We recommend checking our U-Boat Worx’s YouTube page to see its electric subs in action.