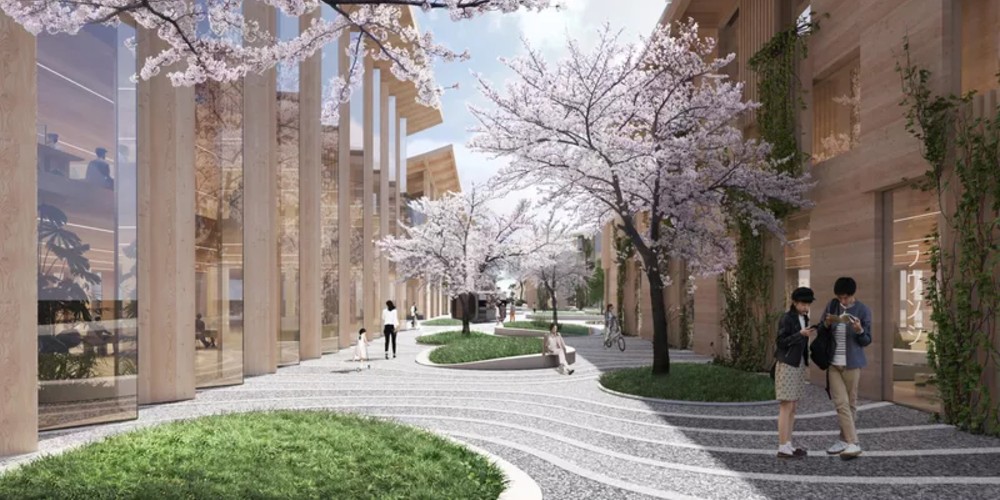 Toyota Woven City (Toyota was originally a loom maker) will be sited at the old vehicle yard adjacent to the former Higashi-Fuji Plant site of Toyota Motor East Japan, Inc.

The plan, announced in January 2020 at CES in Las Vegas, will be a hydrogen-powered quarter housing 2,000 people. Toyota writes:

Woven City is a project that will demonstrate a human-centered approach to community development. In Toyota’s shift from an automobile manufacturer to a mobility company, the project will bring new technology to life in a real-world environment across a wide range of areas, such as automated driving, personal mobility, robotics, and artificial intelligence (AI). It is expected to provide a number of opportunities for businesses and researchers around the world.

Woven City will have three types of streets interwoven with each other on the ground level, one dedicated to automated, zero-emissions driving, one to pedestrians, and one to pedestrians with personal mobility vehicles. There will also be one underground road used to transport goods.

The buildings themselves will be made mostly of wood, using traditional Japanese wood joinery combined with robotic production methods. Rooftops will be covered in photovoltaic panels to supplement the hydrogen fuel cells that will supply the bulk of the energy needed. Food will be grown using hydroponics.

The community will start with roughly 360 residents, mainly senior citizens, families with young children, and inventors, and will eventually have a population of more than 2,000, including Toyota employees. The smart-city platform is designed to be exportable to other countries. Toyota did not give a completion date on its website.

Granholm is confirmed as energy secretary

The US Senate has confirmed former Michigan governor Jennifer Granholm as secretary of the Department of Energy. The Senate backed Granholm by 64 to 35, including 14 Republicans from several states, including North Dakota and Montana, that produce fossil fuels.

Granholm wants to boost jobs in manufacturing of electric vehicles (EVs) and wind and solar power, and is likely to play a big role in Biden’s goal to put the country on a path of decarbonizing the economy by 2050.

She said during Senate hearings that critical minerals, used in batteries for EVs and to support the electric grid, in wind turbines and solar panels, can be mined responsibly in the United States.

I saw how she handled the difficult challenges facing her during the Great Recession, when the bottom dropped out of the auto industry in her state.

She helped save the domestic auto industry; she diversified Michigan’s economy; she brought in new investment in new industry and she created new jobs, leaving no worker behind.

She has the leadership skills, the vision and the compassion … to face the climate challenge and at the same time preserve our energy security, protect our national security, clean up the Cold War legacy and preserve our scientific and technological prowess.

Granholm will be the second woman in the role of energy secretary after Hazel O’Leary during the Clinton administration.