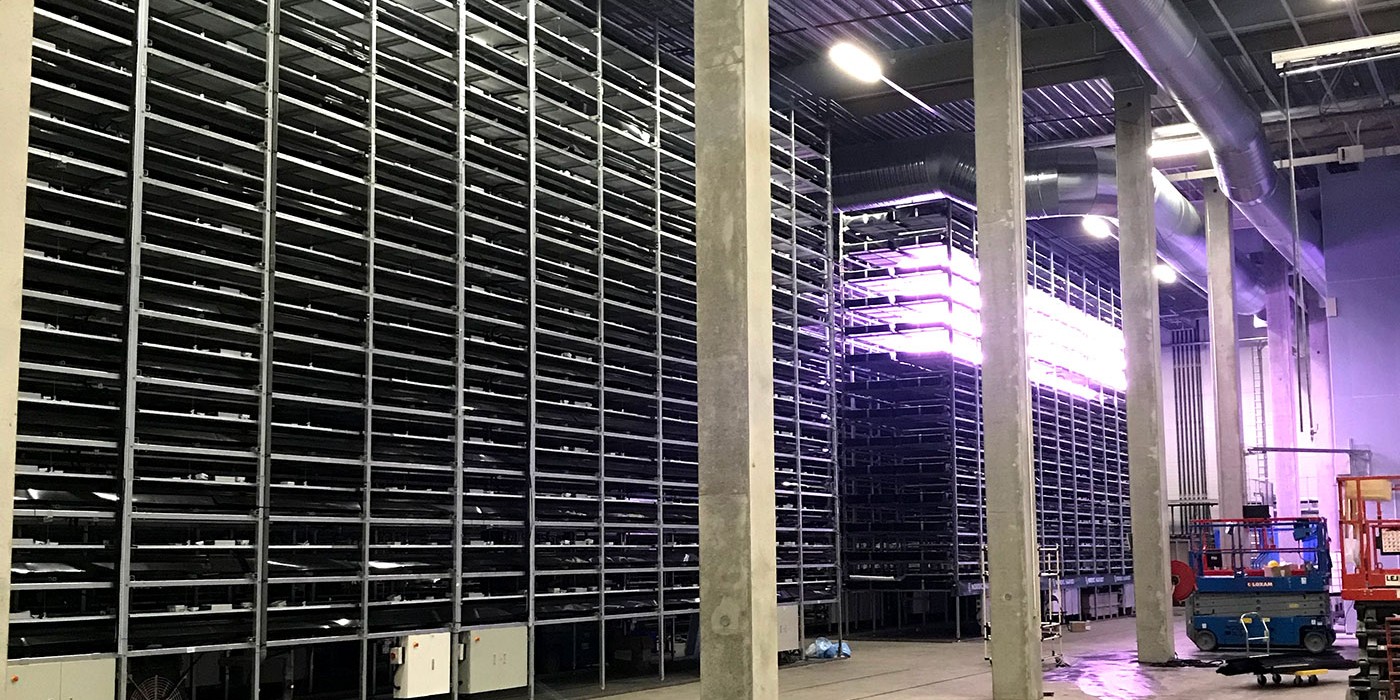 One of Europe’s largest vertical farms is up and running in a warehouse near Copenhagen, and it’s powered by wind. That’s not surprising, since Denmark has the highest proportion of wind power in the world.

Vertical farms, which can be found all over the world, use LED lights and carefully controlled indoor environments to grow produce with much less water, space, and fertilizer than traditional growing environments use.

The 7,000-square-meter (75,347-square-feet) warehouse in the Taastrup area houses crops of salads and herbs grown on shelves that are 14 stories high. Robots on wheels deliver aluminum trays of seeds to growing shelves:

This week, the first crops, which will be harvested 15 times a year, are ready to be delivered to Danish consumers.

Around 200 tonnes of produce will be harvested in the first quarter of 2021. Nordic Harvest’s farm will be able to deliver 1,000 tonnes of salads and herbs by the end of 2021, grown in an area equivalent to a large football field.

The total Danish consumption of this type of green is about 20,000 tonnes per year, and two-thirds are imported. So if there were 20 of these types of vertical farms in Denmark, it would cut down the transport carbon footprint, and they’d provide fresh, locally grown produce.

The company uses more than 20,000 LED lights, and those lights are powered by wind. Anders Riemann, founder and chief executive of Nordic Harvest, explains what makes the farm sustainable [via Techxplore]:

In our case, we use 100% energy from windmills which makes us CO2 neutral. The amount of electricity you consume in one year is equivalent to the electricity produced by numbered windmills offshore.

A vertical farm is characterized by not harming the environment by recycling all the water and nutrition or fertilizer.

The EU regulation dictates that the word organic is linked to the word ‘soil’ so if you take soil out of the equation you can’t name it organic anymore. We grow on the same terms as organic: we don’t use pesticides or insecticides.

Further, this vertical farm in Denmark uses one liter of water per kilogram of produce. That’s 250 times less water used in fields.

Unsurprisingly, traditional farmers aren’t huge fans of vertical farms — they kinda put them out of business. But what if those farmers were given incentives to farm vertically and then plant trees on their land?

Then the farmers could grow year-round, and if the LEDs were powered by wind and produce was local, transport costs would come way down. However, such issues as pollination would, of course, need to be addressed, along with many other details. But it appears as though Nordic Harvest is going to be successful in its growth of greens and herbs.

Vertical farming seems like a positive, sustainable approach to agriculture to us. What do you think? Let us know down in the comments below.