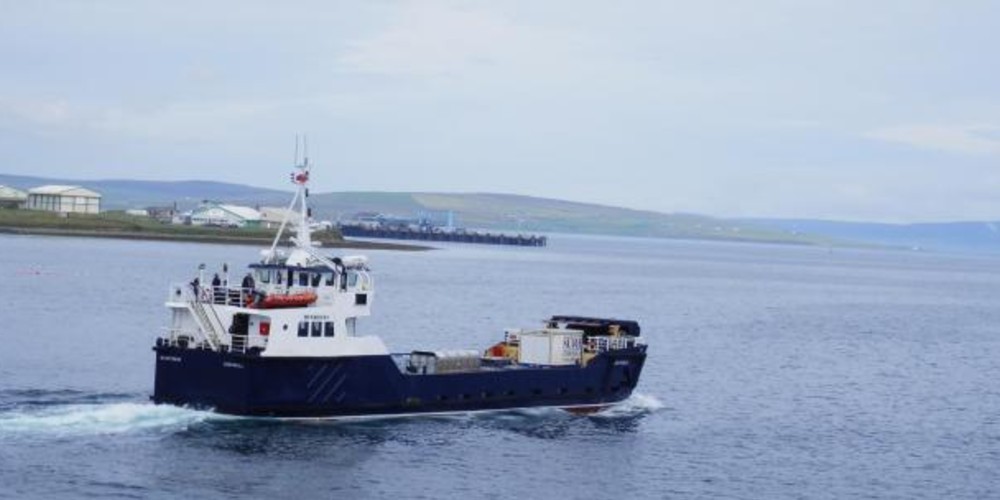 The Glasgow Herald ran an exclusive story yesterday about how the world’s first hydrogen-fueled ferry is set to undergo testing at the European Marine Energy Centre (EMEC) in Scotland’s Orkney Islands. The project will trial a hydrogen/diesel dual fuel conversion system on board the MV Shapinsay (pictured above).

If all goes well, hydrogen ferries could be sailing between Orkney’s islands within six months. The project is expecting to be able to run hydrogen in the auxiliary engine imminently, and the next stage is using the hydrogen in the engine to propel the ferry.

Scotland’s obviously got such an opportunity with so many ferries, and so many communities that have got a lot of renewables, and we know we can’t keep burning fossil fuels. So it does all come together and you think, this is certainly something that Scotland could make a good fist of.

It’s an enormous state, but you gotta start somewhere: Alaska is getting its very first electric school bus, which was built by Thomas Built Buses in North Carolina. The bus is headed to the small town of Tok in the southeastern area of Alaska. Tok Transportation bought the bus with an Alaskan Energy Authority grant. It will replace one of seven diesel buses in the town’s fleet.

Tok Transport also used some grant money to put solar panels on the bus barn to boost its electricity (it will be kept indoors; it gets cold up there). Although electric buses currently cost more upfront, it costs 19 cents a mile to run an electric bus versus 54 cents a mile for a diesel bus. It’s expected to be on the road by next week.

Microwaving plastic to get hydrogen

Chemist Peter Edwards at the University of Oxford wanted to come up with a solution for the huge problem of plastic waste. So he and his colleagues used microwaves, which is cleaner and less energy-intensive than other methods of converting plastic into a clean source of hydrogen. The researchers used only about 300 grams of plastic for each test, but larger experiments are already being planned.

The New Scientist explains how it works:

Most existing approaches involve first using very high temperatures of more than 750C to decompose plastic into syngas, a mixture of hydrogen and carbon monoxide, and then using a second step to separate out the hydrogen.

Edwards and his team instead broke the plastic into small pieces with a kitchen blender and mixed it with a catalyst of iron oxide and aluminium oxide. When blasted with a microwave generator at 1000 watts, the catalyst created hot spots in the plastic and stripped out the hydrogen — recovering 97% of the gas in the plastic within seconds.

The solid material left over was almost exclusively carbon nanotubes. The single-step approach has the advantage of just heating the catalyst, not all of the plastic, resulting in less energy use, as the plastic does not absorb microwaves.