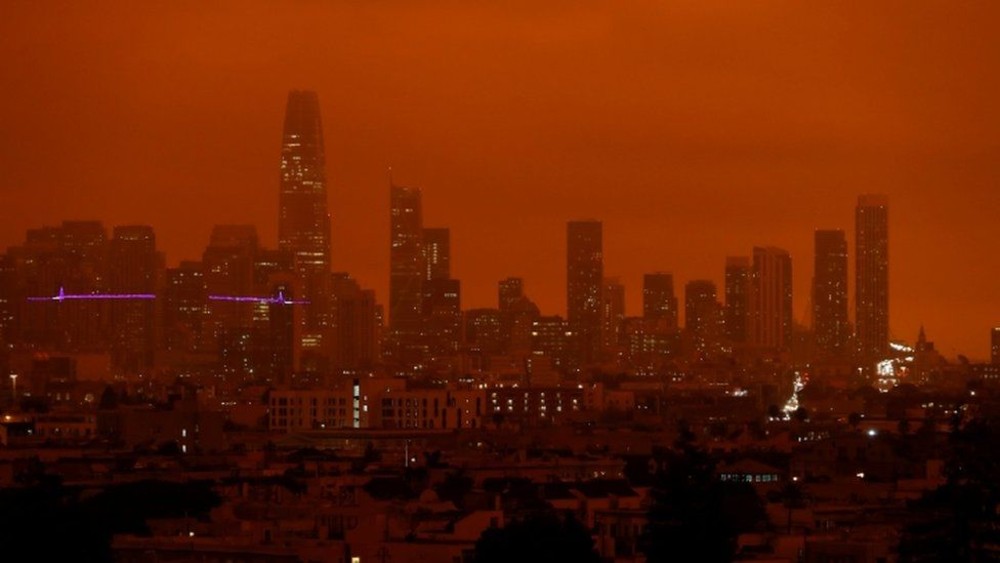 The US West Coast is, to state the obvious, very much on fire. Wildfires are raging from Washington State to Southern California. At least eight deaths have been reported, and mass evacuations have been ordered across California and southwestern Oregon. Many people are unaccounted for. (In a pandemic, no less.)

In California, the sky has a strange orange hue (pictured above) as a result of the dozens of active fires. Governor Gavin Newsom tweeted:

The Center for Climate and Energy Solutions explains the clear link between these devastating fires and climate change:

Research shows that changes in climate that create warmer, drier conditions, increased drought, and a longer fire season are boosting these increases in wildfire risk. For much of the US West, projections show that an average annual 1 degree C temperature increase would increase the median burned area per year as much as 600% in some types of forests.

The New York Times‘ Charlie Warzel wrote about what it’s like to experience a wildfire. He asks, “Would you feel more urgency about climate change if all you could see was smoke?” You can read his full description by clicking on the link, but here’s an excerpt:

Since I moved West, I’ve been preoccupied with this question: Would Americans feel a greater sense of alarm about our rapidly warming planet and the disastrous, perhaps irreversible effects of climate change if everyone could experience a fire season in person? Would cable news hosts devote the same nonstop coverage to fires as they do for hurricanes if more of their executives woke up each morning to falling ash? Would more lawmakers care if it looked like this outside the Capitol at high noon?

Something unprecedented occurred this week: The US agency the Commodity Futures Trading Commission, the federal regulators overseeing the nation’s commodities markets, has declared that climate change’s impact on financial sectors will be severe.

Beyond their physical devastation and tragic loss of human life and livelihood, escalating weather events also pose significant challenges to our financial system and our ability to sustain long-term economic growth. Now, with this report in hand, policymakers, regulators, and stakeholders can begin the process of taking thoughtful and intentional steps toward building a climate-resilient financial system that prepares our country for the decades to come.

The video below summarizes the report, of which you can read the CFTC’s press release here, and briefly touches upon what we can do about it. Yes, the music is dramatic. And you know what? So is the climate crisis.

Climate change leads or ties the COVID-19 pandemic, i.e., “infectious diseases,” as the most frequently mentioned major threat in seven of nine European countries in a Pew Research Center study released on Wednesday.

Pew surveyed people in 14 countries. In Europe, it included Belgium, Denmark, France, Germany, Italy, the Netherlands, Spain, Sweden, and the UK. In the Pacific, Australia, Japan, and South Korea were polled. And in North America, it polled Canada and the US. Only Denmark and the UK in Europe ranked climate change as the second-most important threat. (The UK listed infectious diseases and Denmark listed cyberattacks as first.)

A median of about 7 in 10 people across the 14 countries in the survey say global climate change and the spread of infectious diseases are major threats.

In North America, Canada infectious diseases and climate change tied in first place, and the US chose the pandemic as the most pressing threat, but climate change came in fourth for Americans. Concern about climate change is high in South Korea and Japan (but disease is higher); not so much so for Australians. Here’s how it looks in chart form:

Pew used the data from nationally representative surveys of 14,276 adults via phone from June 10 to Aug. 3. Surveys were conducted in nations with vigorous telephone polling methods.

What’s a tiny urban forest? It’s a method thought up by Japanese botanist Akira Miyawaki who realized Japan’s woodland was largely non-native. Watch the video to see what Miyawaki did next, and how it’s benefitting the environment, not just in Japan but globally, and helps fight climate change:

Here’s a sampling of what happened this week in the #FridaysForFuture protests. Out of Stockholm, the young people are making their point and respecting social distancing:

A group of students in Radnor Township, Pennsylvania, have successfully petitioned their school district to set a goal of transitioning to 100% clean, renewable electricity by 2030. Here’s their tweet:

And here’s a tweet from Elizabeth Wathuti in Kenya:

And finally, the kids in Russia: