Tesla has sent an email to employees claiming that fewer than “10 employees tested positive for COVID-19 due to transmission at work,” but that’s just what the company can confirm. There’s a lot of data to crunch here.

Yesterday, Electrek reported on the current status of COVID-19 cases at Tesla based on internal data from the company.

In the article, we reported that Tesla’s own data showed that over 130 employees/contractors have tested positive for COVID-19, and hundreds more are awaiting test results. Previously, we reported that at least four Fremont plant workers had contracted COVID and were removed from the line as contact tracing began.

We also shared Tesla’s data showing that they believe over 1,500 employees have been “exposed” to the virus, and that cases of exposure have been spiking in the last two weeks.

At the time, we reached out to Tesla for a comment on the data, but the automaker didn’t respond.

Now the automaker has sent a COVID-19 update in an email to employees obtained by Electrek.

I wanted to provide you with an update on our health and safety efforts related to COVID-19. Contrary to the inaccurate reports you may have read, Tesla has had very few positive COVID-19 workplace transmission cases (less than 10 globally since January) because of the robust precautions in place.

The executive is specifically talking about confirmed cases where they can trace the source of the transmission back to work at Tesla.

This is something that was in the original report. Electrek reported this yesterday:

The data seems to indicate that most ‘affected’ employees have been identified as such for having ‘direct contact outside of work,’ though most cases are still ‘unspecified.’

“Unspecified” was the biggest group outlined in Tesla’s own data collection.

These misleading articles reference data that was in the process of being validated and includes people from all our locations around the world, such as those who may have been infected but never came on site or were infected at home while our operations were temporarily paused.

The data referenced in the original report was being shared with employees for the first time, and therefore we assume it was approved by the management, and it is data that was presented as being updated as more data comes in.

We also reported that the data was from across Tesla’s whole organization, but it also clearly shows that most cases are at Tesla’s Fremont factory: 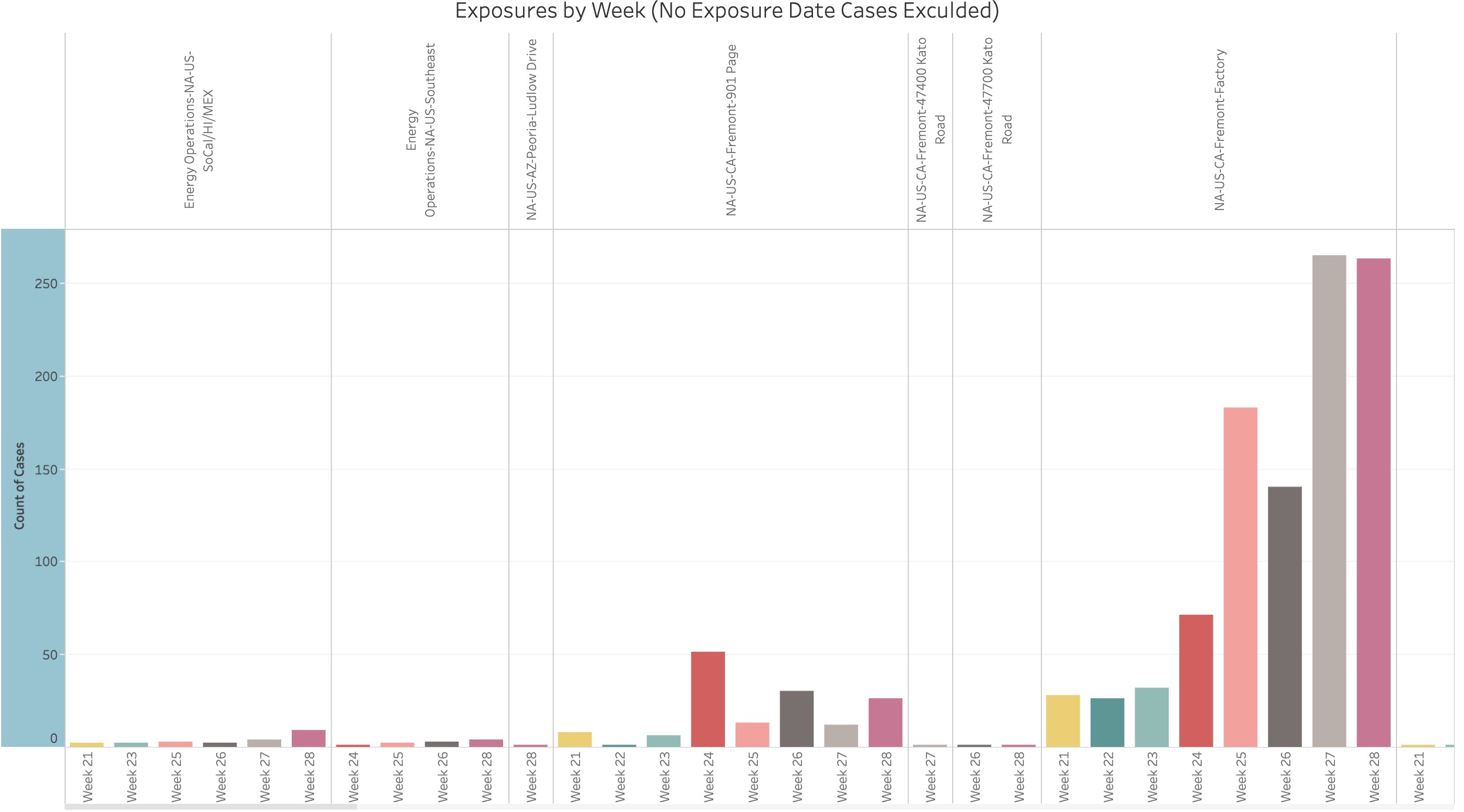 In the email, Shelby did share that Tesla believes no employee is in “serious condition anywhere in the world due to COVID-19.”

She then presented the data in a really positive way for Tesla:

Out of more than 55,000 employees, less than 0.25% of our total company has tested positive globally since the beginning of the year. Nearly all — more than 99.99% — of these occurrences were not cases of the virus transmitted at work.

The data point .25% of 55,000 employees is roughly 137, which would seem to verify the tally from the sheets we obtained. The executives then reiterated some of the measures Tesla has put in place to prevent the spread of the virus.

First off, I am very happy to hear that Tesla is not aware of any employees in serious condition due to the virus. That’s something that wasn’t in the data, and I am glad that they shared it.

Secondly, if Tesla was indeed referring to our report, they didn’t point to anything actually “inaccurate” in it. In fact, they all but confirmed it.

I take offense to that, since again they never actually pointed to anything inaccurate, and on top of that, I gave them the opportunity to comment on the report in the first place.

We just shared the situation based on the data as clearly as we can, and since we did, I’ve received many messages from employees thanking me for the update since they believe Tesla is not communicating with them enough about the situation.

There are always ways to make data look better or worse, and Shelby is definitely guilty of that here.

She claims that less than 10 positives cases were linked to contracting the virus at work, but that’s not exactly true.

Those are just the cases that Tesla could trace back to work and where the employees have tested positive. We don’t know what the threshold is for that, but I am sure it’s high… and arbitrary.

What she doesn’t mention is that the data shows almost 1,000 employees with “unspecified” results of testing — another more than 200 employees who are in the “exposure” cases have not been tested yet based on the data we obtained earlier this week.

If you include those people, Tesla can trace over 200 cases of people with “direct contact at work.”

Therefore, Shelby’s rosy presentation of the data is based on a lack of information from Tesla.

Now with this said, I don’t expect Tesla to be perfect here. This is a difficult situation to manage for everyone involved.

However, due to Elon Musk’s comment on the pandemic, Tesla’s history with Fremont factory, and the shelter-in-place, the company should expect more scrutiny.