Tesla actually launched its own pair of short shorts, which started as a joke by Elon Musk. They are now for sale on the automaker’s website and the internet went crazy for it.

Musk took to Twitter to dunk on Tesla shorts and tease them over all the money they were losing as the stock rose to a record $1,200 per share.

“Shorts” refers to people short-selling stocks, which basically amounts to betting on the price of a stock going down.

At the time, he joked that “Tesla will make fabulous short shorts in radiant red satin with gold trim,” though we now learn that he wasn’t kidding.

Today, Tesla actually launched the pair of shorts on its “shop website,” where it generally sells accessories for its vehicles and Tesla apparel: 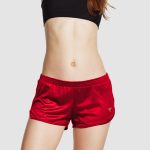 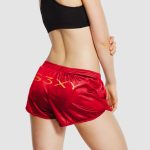 Tesla wrote in the product description of its short shorts:

Celebrate summer with Tesla Short Shorts. Run like the wind or entertain like Liberace with our red satin and gold trim design. Relax poolside or lounge indoors year-round with our limited-edition Tesla Short Shorts, featuring our signature Tesla logo in front with “S3XY” across the back. Enjoy exceptional comfort from the closing bell.

The internet went crazy for it and broke Tesla’s shop website, which quickly started malfunctioning after Musk tweeted the link to its 36 million followers on Twitter.

We grabbed a few pictures seen above before the page went dark.

Less than 30 minutes after he announced the new Tesla product, the tweet had over 30,000 engagements.

Tesla is selling the shorts for $69.420 — numbers often used in juvenile jokes, but 420 is also the price at which Musk planned to take Tesla private a few years ago.

That price sounds quite ridiculous now that the stock is trading at three times the value.

Last week, Musk said that he also planned to send some Tesla shorts to the SEC, who sued him over his statement that he “secured funding” for private investors to buy Tesla at $420 at the time.

Back in 2018, Musk sent a box of short shorts to David Einhorn, a famous hedge fund manager who has a big short position on Tesla.

I want to thank @elonmusk for the shorts. He is a man of his word! They did come with some manufacturing defects. #tesla pic.twitter.com/qsYfO8cbkp

Now the long-running inside joke is an actual product that Tesla is selling on its website.

The craziest part of this whole thing is that you know for a fact thousands of people are actually going to buy these overpriced shorts.

The order button is not working right now.

It’s not clear if it sold that in the first few minutes, or if the site is still having issues.