Tesla Model 3 has become the best-selling car in the UK for the second month in a row amid the global pandemic.

The global pandemic has hit the automotive market hard since it not only forced the closure of many dealerships, but it also affected the financial situation of millions of people who now wouldn’t dare to make a large purchase like a car.

Where Tesla still had inventory left, the automaker still managed to sell some cars thanks to its mainly online-based selling strategy.

This helped Tesla Model 3 become the best-selling car in the UK for the second month in a row.

The Society of Motor Manufacturers and Traders (SMMT) announced the registration numbers for passenger cars in May and they are down 89%.

UK new car registrations fell -89.0% in May, according to figures published today by the Society of Motor Manufacturers and Traders (SMMT). Some 20,247 cars were registered in the month, as ‘click and collect’ services, allowed from mid-month, saw some movement in the market. However, with 163,477 fewer registrations than in the same month last year, the performance still marked the lowest May since 1952.

Interestingly, every category is down significantly year-over-year except for all-electric cars, which are up more than 20%: 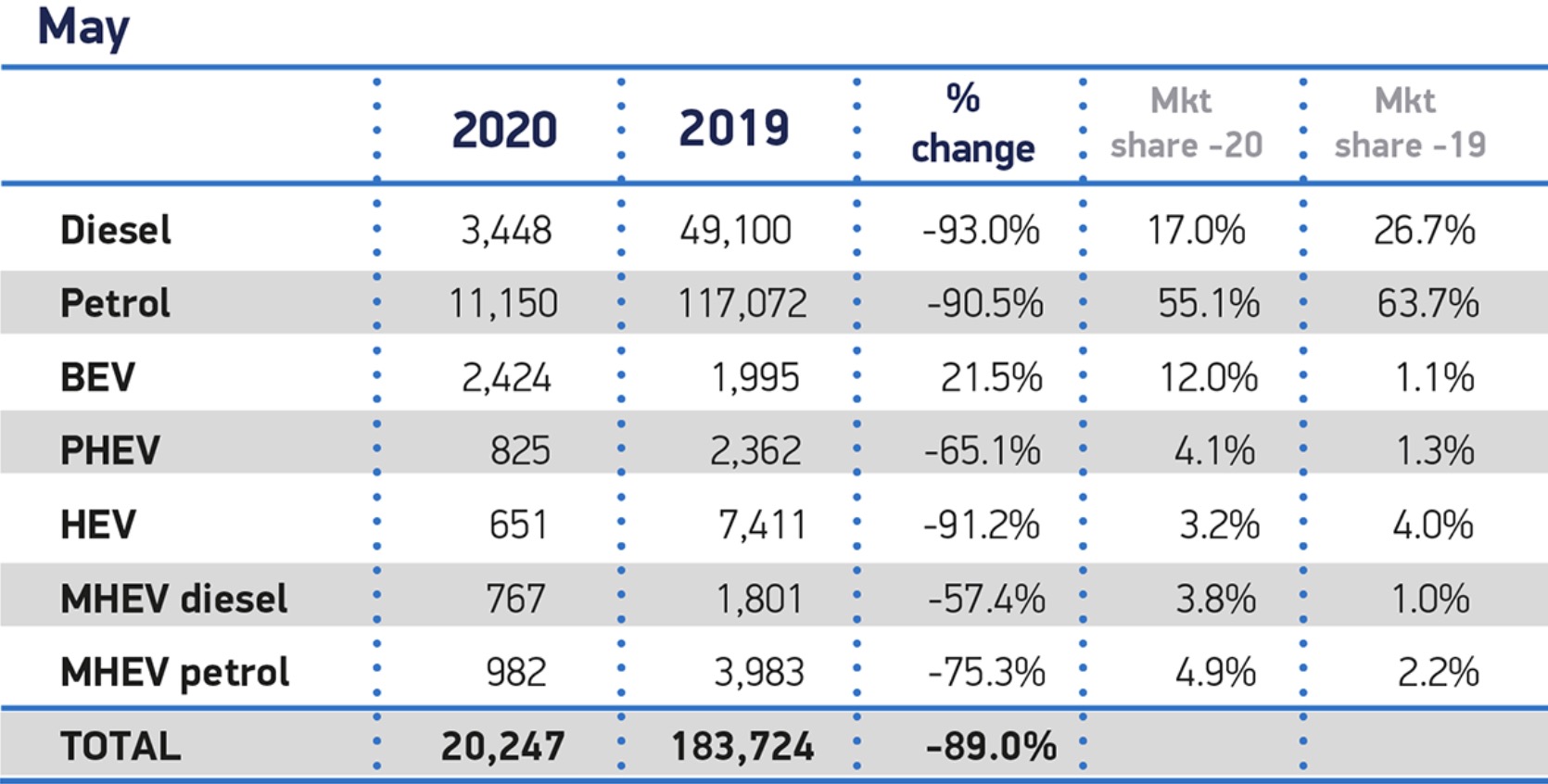 It pushed all-electric vehicles to a record 12% market share of the UK’s entire auto market.

Model 3 led the increase with 852 vehicles delivered in May:

While Model 3 has maintained this position for the second month in a row, it’s likely about to change now that Tesla is selling through its inventory and the next shipment from California might be delayed since the factory was shut down for over a month.

Furthermore, UK dealerships are opening up.

After a second month of shutdown and the inevitable yet devastating impact on the market, this week’s re-opening of dealerships is a pivotal moment for the entire industry and the thousands of people whose jobs depend on it. Customers keen to trade up into the latest, cutting-edge new cars are now able to return to showrooms and early reports suggest there is good business given the circumstances, although it is far too early to tell how demand will pan out over the coming weeks and months.

The UK’s auto market is expected to start recovering in June with factories and showrooms reopening.

While we might not see a market share like 12% for EVs in the UK for a while, this is likely a preview of things to come.

Model 3 might not have been taking the number one best-selling position in the UK prior to the pandemic, but it was still doing well in the market.

That’s partly because of the government’s £3,500 electric car grant.

With more all-electric models hitting the market, EVs are rapidly increasing sales in the UK.