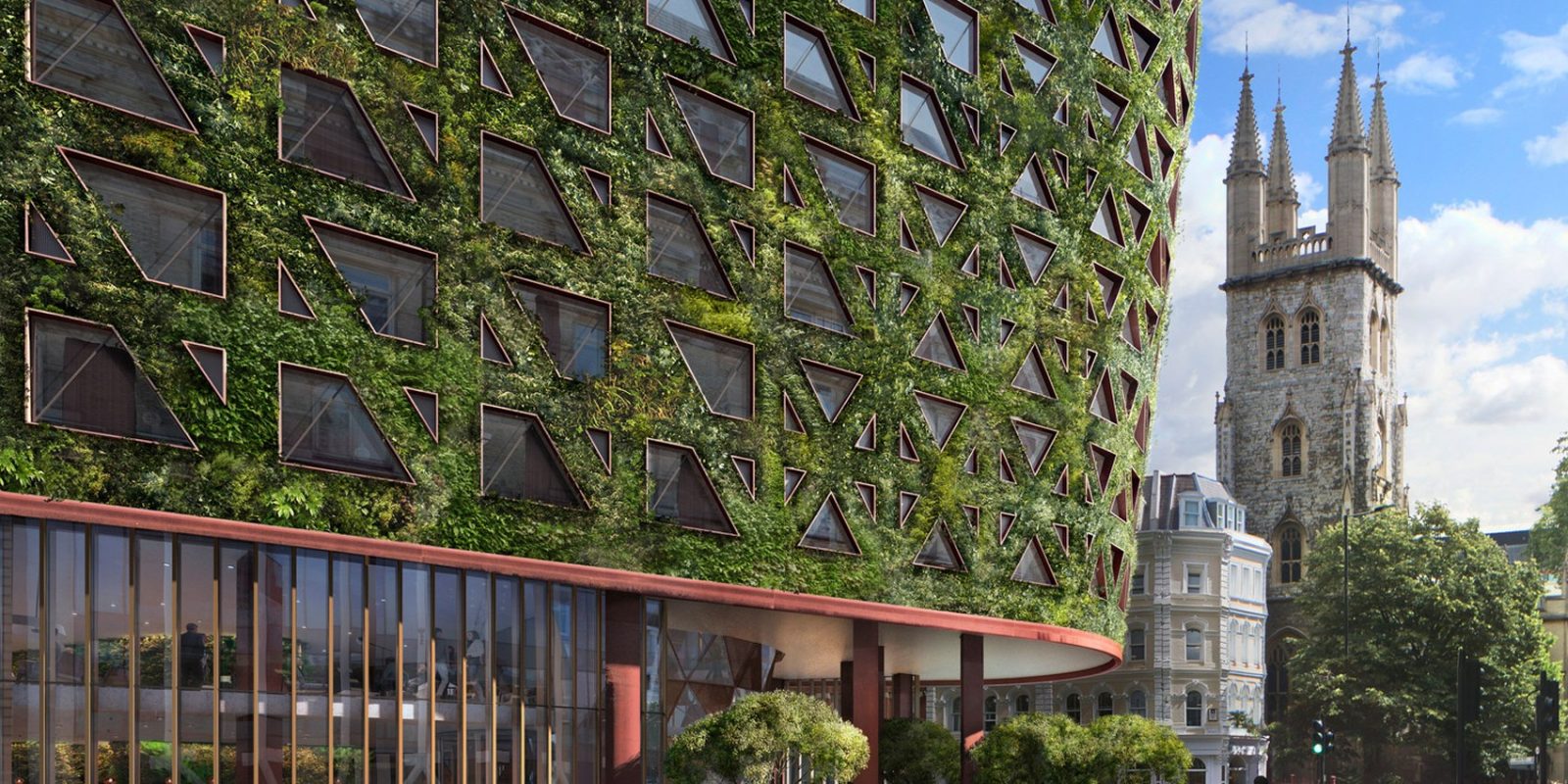 Plans have been submitted to the City of London to build Citicape House (pictured above and left). It was designed by architecture firm Sheppard Robson. The building will feature Europe‘s largest green wall — 40,000 square feet — which will improve local air quality and reduce carbon emissions. 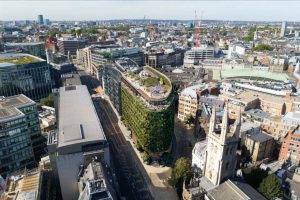 Citicape House will feature a five-star hotel, 40,000 square feet of workspace, a sky bar, meeting and events space, a spa, a restaurant, and coworking space.

The building will be wrapped by a facade of 400,000 plants. It will be located on Holborn Viaduct between Farringdon and Moorgate in the City of London — a traffic-heavy area.

By integrating 40,000 square feet of living wall within the façade, the building is projected to annually capture over eight tonnes of carbon, produce six tonnes of oxygen, and lower the local temperature by three to five degrees Celsius. The wall will also significantly contribute towards improving local air quality, by trapping approximately 500 kg of particulate matter (PM 2.5 and PM 10) per year.

With an Urban Greening Factor of 1.37, Citicape House exceeds the mandated 0.3 by over 45 times, setting the new standard for future developments in Greater London.

Yemen turns to solar in wartime

In 2014, President Abd-Rabbu Mansour Hadi was ousted in Yemen by the Houthi movement. What followed was years of airstrikes by a Saudi Arabian-led coalition, and it’s ongoing. That has resulted in starvation, destruction, disease — and loss of power.

After the conflict began, the UN estimated that only 10% of the population had access to electricity, according to Reuters.

Further, fuel shortages affect water pumping, which is needed to bring water to the surface for drinking and irrigation.

So the Yemenis embraced solar panels and water heaters imported from China and India. Here’s an example from Reuters:

South of the capital in the Houthi-controlled rural Dhamar area, Omar Homadi farms vegetables, corn and the narcotic green leaf qat. He could not cover the cost of diesel to irrigate his land, so he bought a solar-powered pump.

“Our land had dried up but now it has come back to life thanks to the solar energy,” he said.

Dhamar’s water production had fallen to 30% of pre-war levels, said Muhammad Ali al-Habshi of the local water authority, but has returned to 70-80% of pre-war capacity thanks to solar projects supported by international donors.

“People used to get water every 10-12 days, now it is every three days… Solar energy was like a dream.”

The World Bank‘s International Development Association is working with the UN Office for Project Services through the $50 million Yemen Emergency Electricity Access Project to “install solar energy systems in schools and other key public facilities to provide reliable and affordable access to clean water, adequate lighting, and other amenities for communities affected by the ongoing humanitarian crisis in areas where fuel and electricity supply are either nonexistent or too expensive to obtain.”

Europe’s fifth-largest airline will achieve net zero by offsetting the carbon emissions from the fuel used for all of its flights. EasyJet stated in a press release:

Carbon offsetting is only an interim measure while new technologies are developed, so the airline will continue to support innovative technology, including the development of hybrid and electric planes, working with others across the industry to reinvent and decarbonize aviation over the long term. The aim will be for easyJet to reduce the amount of carbon offsetting undertaken as new technologies emerge.

EasyJet expects to spend £25 million ($32.4 million) over the next year compensating ‘for every [metric ton] of CO2 emitted from fuel used for its flights, by ensuring there is one [metric ton] less in the atmosphere.’

Carbon offsetting provides money for projects that reduce emissions to the atmosphere or take from the atmosphere. This could consist, for example, of planting more trees or investing in green energy projects.

SeQuential was already collecting grease from restaurants and businesses from Washington to the Bay Area. Denver-based Crimson Renewable Energy acquired the company in 2018. After the Crimson acquisition, SeQuential moved into Los Angeles and Orange counties and now collects from nearly 20,000 customers across three states.

Biodiesel can be used in nearly any diesel engine and offers many benefits over petroleum-based fuels, including a reduction in harmful particulate matter and significantly less carbon emissions.

Oregon has a Clean Fuels Program, which SeQuential credits with helping to drive demand for biofuel.