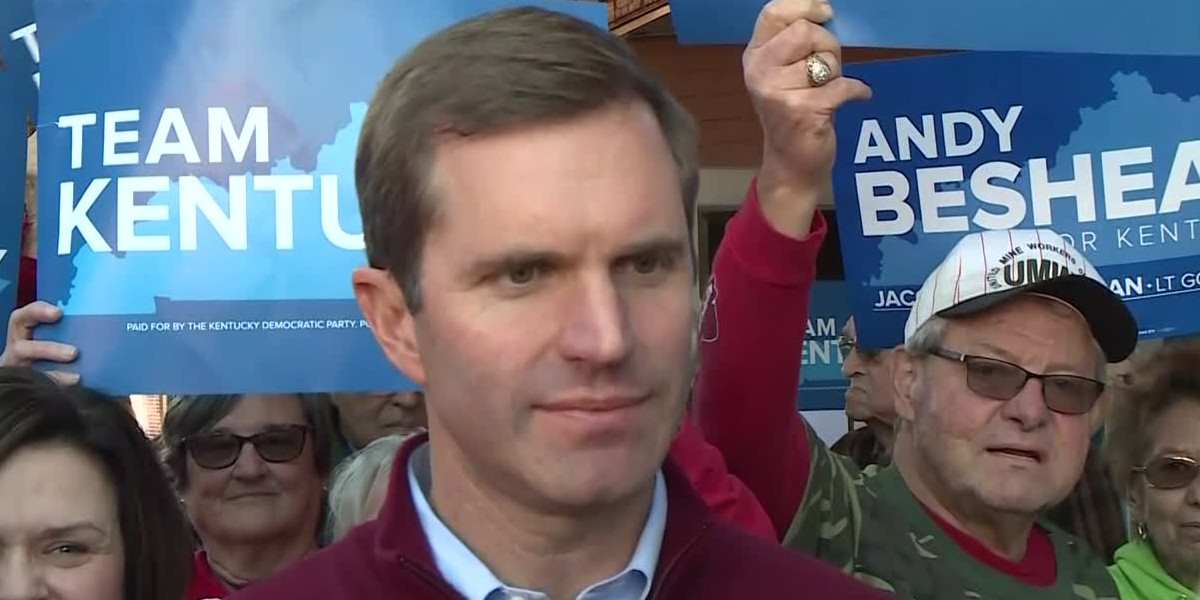 Last night, Democrat and Kentucky’s attorney general Andy Beshear (above) declared victory over his opponent, incumbent Matt Bevin, in the Kentucky gubernatorial race. It was a razor-thin margin, with 0.4 percentage points. (As of publishing time, Bevin hasn’t conceded, but ok.)

To put that in perspective, all other candidates who won their races yesterday in Kentucky were Republicans, and Donald Trump won Kentucky in 2016 by the largest margin of any Republican since Richard Nixon in 1972. (The Louisville Courier-Journal said Bevin lost in a deep red state because “he’s a jerk.”)

But coal overrides political party in Kentucky. “If you’re not a friend of coal, then you’re not going to get the votes,” says Erin Savage, a program manager for environmental group Appalachian Voices [via Mother Jones — click on the link to read their excellent story, “Kentucky’s Leaders Are Siding with the Coal Industry, and its Poorest Residents Are Paying a Price”].

Kentucky has a long history with coal. It ranks fifth in coal production in the US, and in 2018, coal-fired power plants supplied three-fourths of Kentucky’s electricity generation.

However, the Lexington Herald-Leader reported in August that coal jobs in Eastern Kentucky dropped 15.2% in the second quarter of 2019, compared to the same period in 2018.

(Kentucky’s total population is around 4.5 million.)

So what’s Beshear’s position on energy? Here’s what his website says:

Climate change is real, and Kentucky needs an all-the-above energy policy that includes renewables and clean-coal technology. At the same time, one of the biggest challenges our Kentucky families face, especially in the eastern part of the state, is that their energy bills go up year after year, while good jobs are hard to find and wages remain flat. Kentucky families shouldn’t have to choose between putting food on the table and paying their utility bills. Unfortunately, that’s a decision many families have to make. As attorney general over the last three years, my office has opposed dozens of utility bill hikes, and has helped save Kentucky families nearly $1.2 billion.

Frankly, he’s not going to win any green energy awards — “clean-coal technology” is an oxymoron. In 2016, Beshear called for the incoming Trump administration to block Obama’s Clean Power Plan, which set the first-ever national limits on carbon pollution from power plants. Beshear claimed that it violated the law. Trump repealed the plan in June 2019.

If Beshear really cares about Kentucky’s families, he should make a huge effort to invest in renewables as coal dies off, the way that red-state Texas has invested in wind, to create jobs, lower fuel costs — and especially improve Kentuckians’ health. Kentuckians for the Commonwealth reports that “the public health costs of pollution from coal operations in Appalachia amount to a staggering $75 billion a year.” So it’s no surprise that healthcare is a big issue in Kentucky.

But hey, at least Beshear admits that climate change is real, even if he does want to continue to contribute to it.

Australia’s main grid achieved 50% green energy in one trading period today. It was the first time that half of net demand was met by clean energy.

The combined output of rooftop solar, large-scale wind, and large-scale solar reached 50.2% of the near 25 GW being produced on the main grid, which includes Queensland, NSW, Victoria, Tasmania and South Australia, but not Western Australia or the Northern Territory.

Rooftop solar is being installed at record levels in Australia, with a new record in October of 207 MW. That beat the previous record by 15%.

And as Electrek has previously reported, Tesla agreed to install a giant virtual power plant made of 50,000 Powerwalls and solar systems in Australia in order to reduce electricity costs.

Bristol has become the first city in the UK to vote to ban diesel vehicles in its city center, as well as in a wider Clean Air Zone. City councillors voted for the ban last night. The ban would be daily between 7 a.m. and 3 p.m.

Bristol will be asking the government for £113 million to fund the measures. The target start date is 2021.

These ambitious plans demonstrate our commitment to tackling air pollution so we meet legal limits within the shortest time, without disproportionally affecting citizens on lower incomes which would happen with a blanket approach to charging vehicles.