The Plains states are seeing strong, steady winds today that are keeping the wind turbines turning, so wholesale power prices have fallen below zero.

When there’s an overabundance of solar or wind, grid operators send prices plunging to negative levels — a signal to generators that they need to take supplies offline so they don’t overload transmission lines.

On Friday, wind output surged to as much as 17,264 megawatts across the Southwest Power Pool (SPP) — a grid that stretches from North Dakota to Texas. That’s more than 60% of the region’s power.

Power prices fell below negative $10 a megawatt-hour for much of the region.

A collective of utilities companies established the Southwest Power Pool in 1941, during World War II, out of necessity due to scarcity. The SPP now has a service territory of around 546,000 square miles, and has members in 14 states. Wind makes up 22.9% of SPP’s generating capacity as of January 1, 2019. But wind still trails behind natural gas, at 40.3%, and coal at 28.6%. 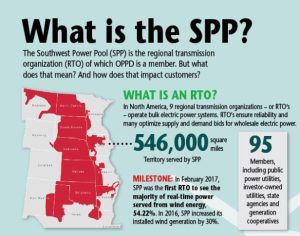 The Omaha Public Power District, who joined the SPP in 2009, posted the graphic on the right in 2017, which explains that “in February 2017, SPP was the first RTO [regional transmission organization] to see the majority of real-time power served from wind energy, 54.22%. In 2016, SPP increased its installed wind generation by 30%.”

Negative electricity rates are becoming more common as utilities incorporate solar and wind power with no fossil-fuel costs. This will only increase as the US reduces coal consumption and builds more green energy sources.