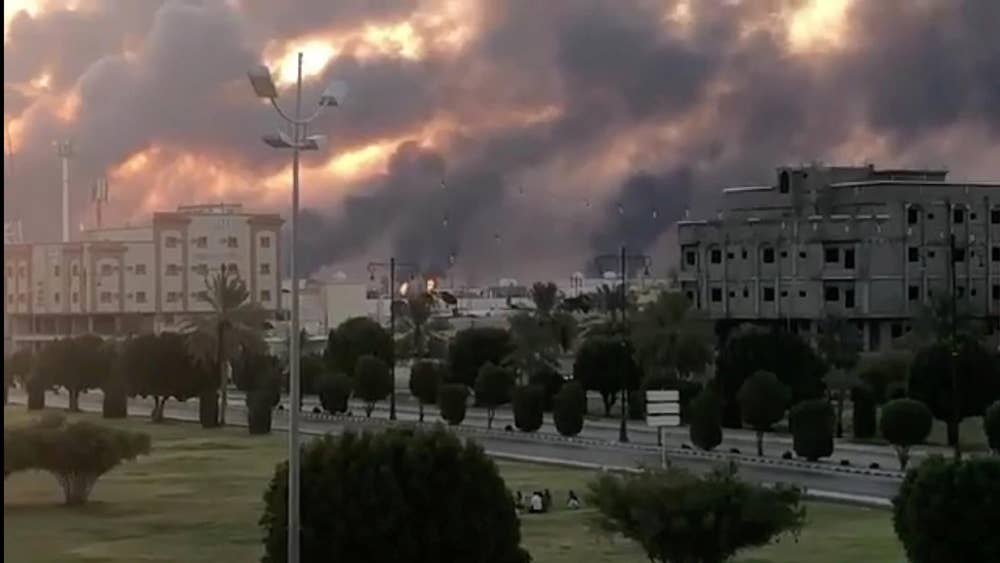 On Saturday morning, Saudi Arabian oil processing company Aramco’s plants at Abqaiq and Khurais were attacked by drones. (Yemen’s Houthi rebels claimed responsibility for the attack, but the US is blaming Iran, who denies they were responsible. Saudi Arabia says Iranian weapons were used.)

Abqaiq is the world’s largest processing plant, and Saudi Arabia is the world’s biggest oil exporter. The fires that resulted from the attacks halted nearly half of Saudi Arabia’s oil production. That’s 5% of the global daily oil supply.

As of this morning, news outlets reported a “massive price spike” in oil. The International Energy Agency says it’s the largest disruption in oil production on record, but Saudi Arabia says it can tap into its stockpiles to keep supply going.

So, I scrolled through Twitter to see what electric vehicle drivers and supporters thought about this major fossil-fuel energy supply disruption. (Gas prices will likely “creep up” this fall, said an oil analyst.)

Mark Brownstein, senior vice president of energy at the Environmental Defense Fund, said that efficiency and diversification were important considerations for the US:

Good time to rethink rollback of auto efficiency standards? National energy security must be about more than supply. Efficiency, diversification (EVs) must be in the mix. https://t.co/nnPCx8A5oP

Securing America’s Future Energy (SAFE), a nonpartisan organization that aims to reduce US dependence on oil, took this opportunity to promote EVs as a long-term solution:

Australia’s Renew Economy, an independent news and commentary site on clean energy and climate change, cited Australia’s dependence on imported oil as a weakness, and the country’s need to “embrace EVs.”

And when it comes to saving money on gas for individual drivers, Tesla driver David McLeod and the EV Society of Sudbury, Ontario, had this to say:

Saudi Oil troubles may cause a stampede into EV’s. Who knows where this will end if war breaks out with Iran.
Glad I have a Tesla. No lining up at Gas stations for me. $TSLA.https://t.co/AfC6TRmzYi

Gas prices got you down? Switch to an #ElectricVehicle and say goodbye to sending your money overseas and pumping gas, forever: https://t.co/6wf762XN0C | #KickGas #KeepCalmChargeOn

Electric vehicle drivers often talk about how much they don’t miss going to the gas station. The Saudi Arabian incident just drives that home (no pun intended).

South Africa is hashing out a plan to establish the world’s largest green-energy financing initiative.

… envisions the establishment of a US$11 billion facility backed by development finance institutions and private funders. The new entity would lend money to Eskom at slightly below commercial rates on condition it accelerates the closure of polluting coal plants to make way for renewable energy…

Eskom supplies about 95% of South Africa’s power and has turned to the government for aid to remain solvent after amassing [around US$30 billion] of debt.

South Africa is the world’s 14th-largest producer of greenhouse gases, and the government is under pressure to deliver on a commitment it made in 2009 to reduce emissions by 42% by 2025.

The South Carolina Energy Freedom Act, which passed in May 2019, was a great boost for solar in the Palmetto State.

Shelley Hudson Robbins is the energy and state policy director of Upstate Forever, a Greenville-based conservation nonprofit in South Carolina. Robbins wrote about the benefits of green energy for the state in the Greenville News. Here are some notable excerpts from her op-ed, which notes that solar:

Increasing South Carolina’s solar capacity must become a priority if we want to protect citizens and businesses from the risk associated with fossil fuel commodity prices, if we want to build county coffers without increasing expenses, and if we want to attract the best corporate partners to this state.

Solar is the best choice for the environment — that’s a given — but also for the state’s economic health.

EnlightenSC, a South Carolina energy education program, says that 3.4% of all the electricity South Carolina generates comes from renewable resources if hydropower is included. Obviously, there’s room for improvement there, so it’s good that there’s a growing interest.

Ellen Wald at Forbes rightly points out that globally, solar and wind offer great potential for green energy, but that “we need to find a way to effectively store the power they produce… Right now our batteries cannot store that kind of power over the long term, regularly recharge, and last for years. Investment and innovation in battery and energy storage technology is still needed before we can transition away from fossil fuels.”

Quite right, Ms. Wald. I have solar here in Florida, and plenty of sun to go with it. But what I really want is a phenomenally good battery to store my energy during cloudy days, or, heaven forbid, the power gets knocked out due to extreme weather such as hurricanes. I had no power during Irma for five days because the electrical lines were down and transformers blew, and I don’t want to use a gas-powered generator. They’re polluting and noisy.

I’ll let you know what I find (Tesla Powerwall, I’m researching you), and if you have thoughts you want to share about affordable, great storage batteries, please comment below.