Tesla’s price cuts have been so significant in some regions that it devaluated some recently purchased vehicles by over 40% and it pushed some owners to literally organize protests.

When launching the base Model 3 and changing its sales strategy to online-only last week, Tesla also made some significant price and option changes to its Model S and Model X lineup.

We reported on those changes, which include a new Model S battery pack and some up to $12,000 massive price drops in the US.

Tesla has been justifying those price reductions by saying that the shift to online sales is going to result in cost savings.

Overseas, the price reductions are even more significant.

In some markets, the higher-end versions of Model S and Model X have seen overnight price reductions of over $30,000.

One of those markets is Taiwan, where the price of a Model S P100D was cut almost in half by Tesla’s latest price changes – resulting in about $100,000 in savings.

It angered some owners so much that they organized protests at Tesla stores and Superchargers:

Did anyone see what’s happening in Taiwan? Taiwan Tesla Owners protesting about the price adjustment outside of the Supercharger Station and Store/Service Centre in Taiwan. Have they solved the issue? @TeslaOwnersTwn #Tesla #TeslaTaiwan $TSLA pic.twitter.com/mIKPFPigAf

In China, the price reductions have also been quite significant and indignation over the decision started trending on Weibo (China’s Twitter).

It made it into Chinese media.

Global Times reported some of what Tesla owners were saying in China:

Some of them went as far as protesting in front of Tesla stores and installing signs on the windows: 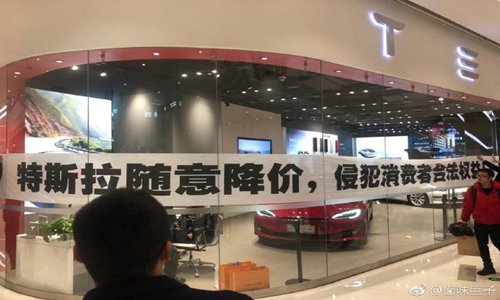 It roughly translates into “don’t buy now, buy tomorrow at a discount”.

Owners in many other markets expressed their disappointment over how Tesla is handling the situation, but the situation seems to have escalated more significantly in China and Taiwan.

Other Tesla fans and owners are defending the company saying that price reductions are always good regardless of how they are being introduced.

I’ve been saying it for a while, Tesla’s pricing structure makes them look like amateurs. Those massive sudden price changes can’t be only justified by moving sales online.

Tesla used to push this idea that their pricing was better than regular dealerships who try to negotiate different deals with different buyers. They say that everyone pays the same price.

That’s true as long as everyone buys at the same time.

I completely understand why those owners are angry. They see the value of their car plummeting overnight and not because Tesla introduced new features, but because it suddenly decided to change its pricing structure with little to no explanation.

That said, I don’t think those protests are the right way to go about it, especially those blocking access to Supercharger stations. That’s only affecting other Tesla owners who had nothing to do with Tesla’s decision.

I think Tesla should work to reduce prices, but they should do it in a more structured way and not with sudden massive changes like that. They should also do a better job at explaining the reason they are reducing prices. Without any reason, recent buyers feel like they were just tricked into paying more.