Faraday Future settles dispute with investor, but it’s not out of the woods

Faraday Future, once seen as the main EV startup, had a tough 2018, but it announced that it closed out the year by settling its dispute with its main investor.

Though it doesn’t mean that it’s out of the woods just yet.

It seemed like the startup was finally out of the woods after a large Chinese holding company promised a massive $2 billion investment in Faraday Future, but the relationship has proven to be extremely difficult.

The Chinese holding company, Evergrande, agreed to take a 45% stake in the company for $2 billion in funding starting with “initial payments totaling $800m payment through early 2018, and the remaining $1.2 billion over time.”

According to FF, the firm failed to make the additional payments and “tried to take control of the startup.”

They have reportedly been trying to prevent FF from seeking funding from other investors – leaving them without funds.

This has triggered layoffs, furloughs and more people leaving the startup throughout the fourth quarter.

This week, Faraday Future announced that it has settled its dispute with Evergrande, or more specifically its subsidiary Season Smart, and terminated any previous investment contract:

“Today, FF (Faraday Future Inc.) and its investor Season Smart have announced that they have entered into a newly agreed upon restructuring agreement. Both parties agreed to terminate the previous investment contract, withdraw and waive all current litigation and arbitration proceedings, and release all security including the asset preservation pledge and equity financing rights.”

While this settles their dispute, it doesn’t solve FF’s cash issue, which led to the recent shutdown of their operations.

Yet, the company claims that it will now enable them to proceed “quickly” with other financing options from other potential investors.

FF didn’t specify the size of the fundings it is seeking, but it’s expected to still need a significant amount of money to bring the FF91 electric vehicle to production. 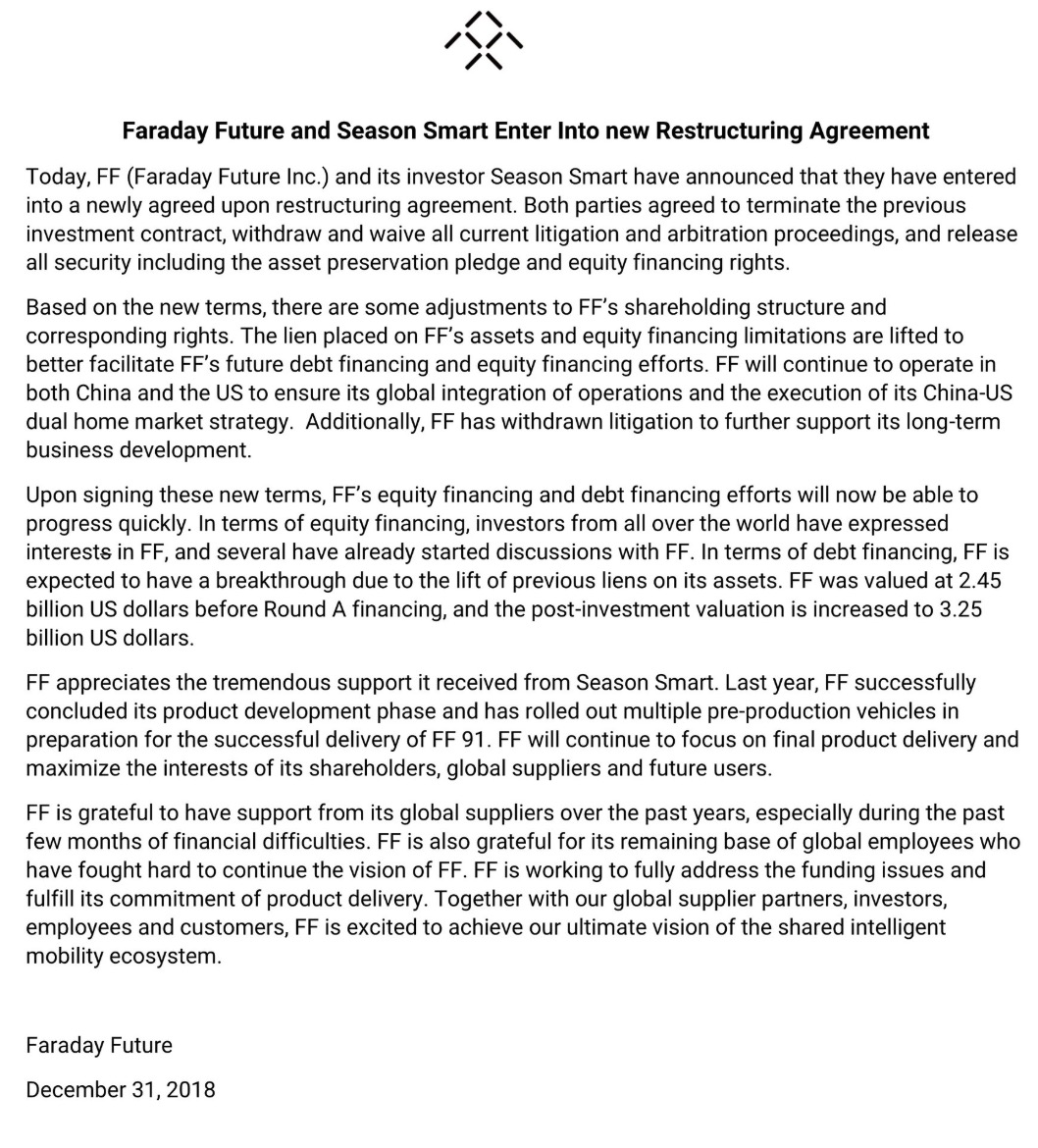 The problem is that even though it’s a step in the right direction, the damage has been done here.

During those difficult few months, FF has lost several key employees who apparently couldn’t see the light at the end of the tunnel.

Nick Sampson, who was the face of the company since the beginning, has left. Important engineers like Peter Savagian have also left and Dag Reckhorn, a former Tesla executive who has been leading FF’s manufacturing effort, has also resigned.

Many more have left the company and even if FF ends up securing another investment, they are not likely to come back.

I think those departures were a giant hit to the company and it will last for a long time even if they get another investment.

But we can’t call the death of the startup just yet. I was surprised by the last investment that saved them. I could be surprised again.