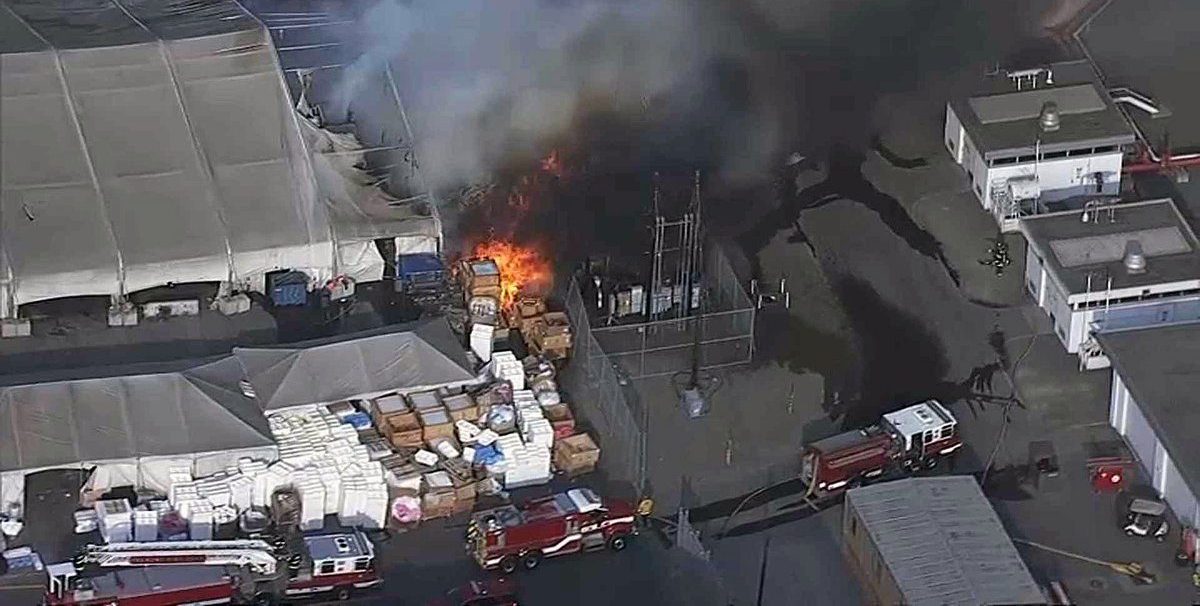 A fire started at Tesla Fremont Factory earlier this evening, according to the local fire department.

The cause and extent of the damages are unknown at this point and the efforts to control the fire are still ongoing at the time of writing.

Update: The fire has now been extinguished, said the Fremont Fire Department

According to reports from the local fire department scanner conversations (@CAFireScanner), the fire started on “a large pile of cardboard” and it started threatening nearby structures.

The Fremont Fire Department has commented on the fire:

“Initial reports are fire started in a cardboard pile, threatening an outside structure and now started a small grass fire. We have resources on scene and are taking action.”

NBC got some footage of the fire (picture above and video below):

It’s unclear if it will have any impact on production at the factory. We contacted Tesla about the situation and we will update if we get a statement.

“This evening, some cardboard and shipping materials being prepared for recycling on our southern fence line caught fire, along with a small patch of grass next to a Tesla parking lot. The fire is now contained. We would like to thank the Fremont Fire Department for their rapid response. There are no injuries and we are investigating the cause.”

Tesla Factory has had several previous fires in the past and one of them reportedly shut down power for an extended period of time – affecting production.

Reports from the local fire department scanner conversations say that the Fremont Fire Department requested another engine on the scene:

#Tesla IC requested an addl engine as the cardboard fire has spotted into a grass field w/ slow ROS. They had another fire @ the Tesla Factory in late June, was also some kind of cardboard machine on fire in a large tent structure. #Fremont

Update: the Fremont Fire Department says that the fire has now been extinguished:

Fire has been extinguished, investigator has been called to the scene and no reported injuries at this time. Thank you @ktvu for the overhead pictures! https://t.co/ICUlyqG99A

They report that no one has been injured.

I was just there. Cardboard being prepped for recycling along southern fence line caught fire. Super appreciate fast response by Fremont fire dept! No injuries or damage to factory.