A stolen Tesla is mysteriously found in a river

Tesla’s vehicles are rarely stolen thanks to their always-on advanced GPS tracking feature, but every now and again a few disappear.

Now a stolen Tesla Model S was mysteriously found in a river in British Columbia.

At 9 a.m. yesterday, the police recovered a brown 2016 Tesla Model S from the Fraser River.

The vehicle was identified as having been stolen from its owner in Burnaby the night before, said Langley RCMP Cpl. Holly Largy via Langley Times.

It was found by a paddler on the river. The local news reported:

“The paddler assisted police in retrieving a large bag of onions that had floated away from being inside the vehicle.”

Onions are not the only interesting thing about the discovery though.

They couldn’t have launched the vehicle into the river where it was found so they think the thieves drove it into the river from the boat launch and it floated a “fair distance” down the river.

We have previously seen a Model S briefly able to float and CEO Elon Musk even said that it “floats well enough to turn it into a boat for short periods of time” with “thrust via wheel rotation”, but he obviously doesn’t recommend it.

While Tesla vehicles are rarely being stolen and not recovered, we have heard of several stories of thieves taking Tesla vehicles on joyrides, like in November of last year when a Tesla was stolen from the LA airport and it was recovered after the owner’s lawyer guided police with mobile app.

But we have also heard of more serious thefts. For example, we reported last year on a series of Tesla vehicle thefts in Europe where the vehicles were never recovered. It even prompted Tesla to work on a new software update to help prevent theft after it was believed that the thieves gained access by hacking the key fob signal.

It’s not clear how it was stolen in this case.

I don’t know how it was stolen, but here’s my wild theory for how it ended up in the river. The thief or thieves figured out that the vehicle could be tracked and they didn’t know how to disable it.

Instead of just ditching it, they decided to get rid of the evidence. They bought a big bag of onions and used it to press down on the accelerator and launched it into the river.

But they didn’t know that the vehicle would engage Tesla’s James Bond submarine Easter Egg mode and float away: 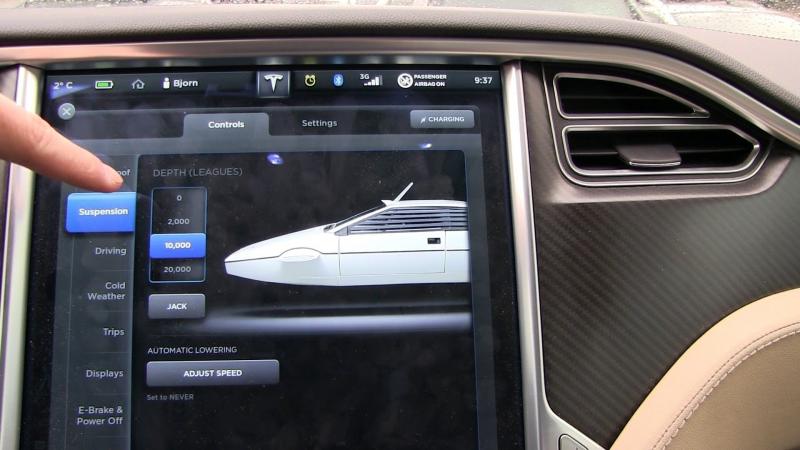