Active safety features are becoming increasingly popular as automakers are trying to leverage their development of autonomous driving into automated driver assist features.

Tesla’s Autopilot has been regarded as a leader in the space and now Edmunds releases evidence of that in a new report.

Auto industry research firm Edmunds released a new report about the availability of active safety features in the industry today.

Jessica Caldwell, Edmunds executive director of industry analysis, linked the prelevance of those features with the race to autonomy:

“While there are a number of ways one can define who’s ‘leading’ in the race to autonomy, analyzing the prevalence of active safety features demonstrates just how ready OEMs are to bring this technology to mass production, and how willing consumers are to adopt it. While some car buyers may view a fully autonomous vehicle as a novelty, a vehicle that has the ability to prevent an accident before it occurs is seen as a safety breakthrough.”

Tesla arrived at the first place for the availability of such features (via Bloomberg): 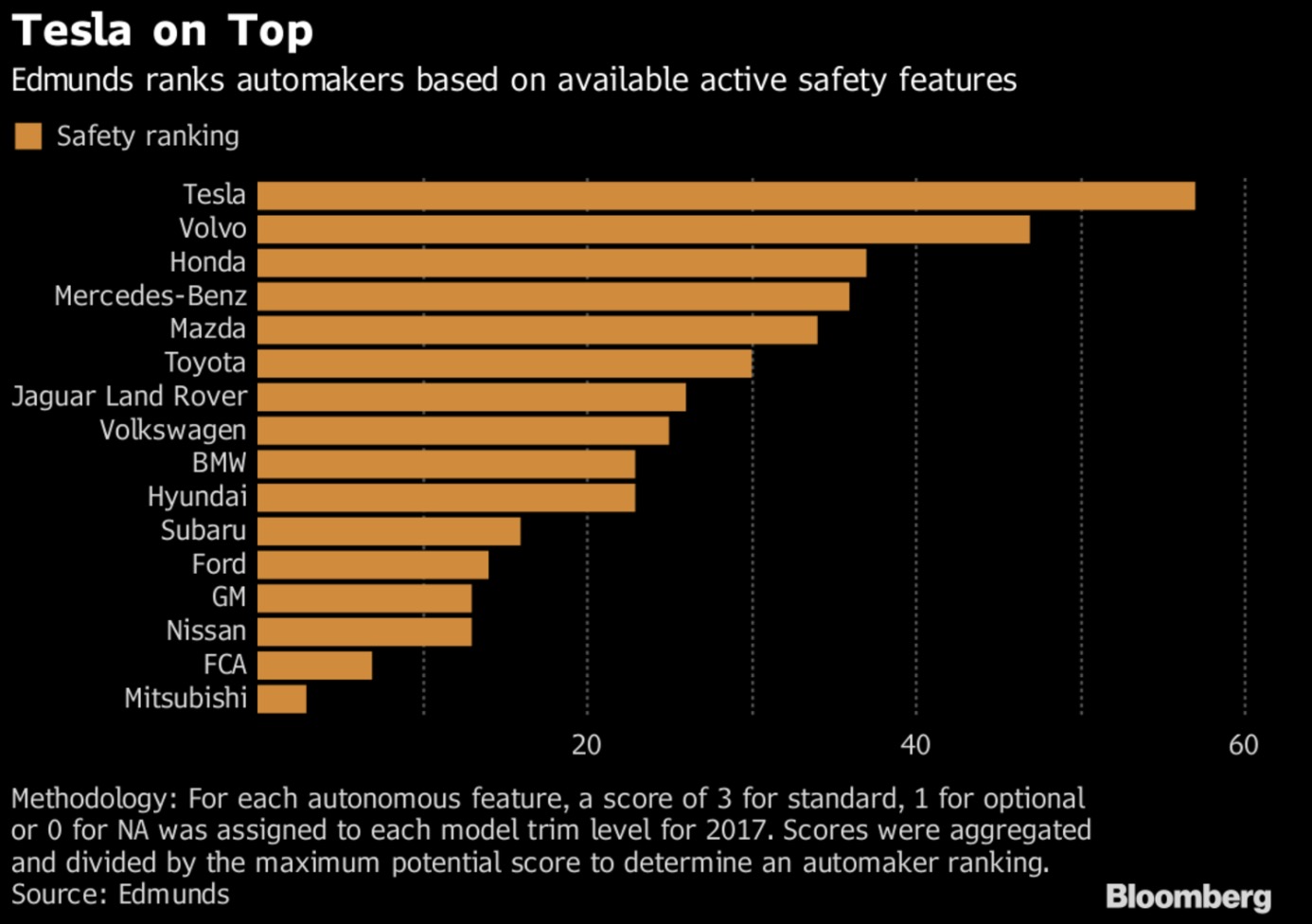 Automakers who make the features standard receive a higher score per feature, which is likely what helped Tesla lead Edmunds’ ranking.

Tesla’s active safety features are powered by its Autopilot. Every car it produces is equipped with Autopilot hardware and all the safety features it enables are offered at no extra cost. Tesla instead funds the Autopilot by charging for “convenience features” enabled by Autopilot.

Another advantage for Tesla in the survey is that Edmunds found those features to be more prevalent in luxury vehicles, which is currently most of Tesla’s lineup.

The research firm says that “more than 40 percent of consumers said they would spend between $1,000 and $2,000 more for a vehicle that had active safety features.”

Caldwell again linked back the features to autonomous driving leadership:

“Automakers that offer a full suite of active safety features on their vehicles are at a distinct advantage in the race to autonomy. It’s a way they can demonstrate their technology leadership to car buyers now so that when full autonomy does come, they’ve already established trust and credibility with a large base of potential buyers.”

When it comes to Tesla, it certainly closely linked to their autonomous driving effort since it utilizes the same hardware that Tesla plans to use for its autonomous driving technology and it also leverages its computer vision and machine learning system developed for it.

The automaker recently released a new update to enable full speed automatic emergency braking, which is an active safety feature, on its vehicles equipped with its latest Autopilot hardware suite (2.5), along with other Autopilot improvements.

We have seen some impressive uses of Tesla’s safety features captured on video before, like when the forward collision warning alert using Autopilot’s new radar technology predicted an accident caught on dashcam a second later.