Most of the clientele Andrew Davidge’s Santa Clara-based electric bicycle company attracts are people for whom biking has become a thing of the past, the bike itself an afterthought – maybe a once-in-a-while thing, if that.

Which is why one of the key draws the company he founded – Vintage Electric Bikes, which started shipping its first bikes in 2013 and which is launching a new fifth model in June – is the design of its rides. The idea is pretty straightforward, marrying simple, California-built bikes with the chrome-laden charm of old, classic cars…

The result is a model like Vintage Electric’s Outlaw Tracker, a limited-edition electric bike that takes design cues from the Porsche 356. For it, the company teamed up with Rod Emory of Emory Motorsports to collaborate on a bike with design touches that include a classic bucket headlight with mesh grill and a retro-looking aluminum battery box.

The new model is “The Cafe,” which Davidge describes as an urban commuter-style bike. It’s the one launching next month and is more of a pedal assist, traditional ride that will be a different style of bike for Vintage Electric – more along the lines of what other bike companies produce “but with our flair to it.”

“Design’s a big part of it for us,” Davidge said. “We want to build bikes we would like to ride. And we want to be different. We’re not going to come out with a bike that’s able to compete with the Trek Super Commuter or whatever it is. If we try to do that style of bike, they’ll beat us at that game.

“We want to put our bikes in a package that really clicks with some people. We know we’re not going to sell bikes to every single person, but what matters to us is selling bikes to those people who really get it. And when they see our bike they’re like – I need that. I’m in love.”

The company had a classic Silicon Valley start – knocking around in Davidge’s family garage, building bikes for fun. Before there was any notion of doing something more and building a business.

Davidge recalls the simple joy of starting to ride his creations around town. The concept started to attract attention – and customers. That was around 2012, when he’d otherwise been set to go to school for transportation design.

He decided instead to gather a group of friends, rent a warehouse and launch a business around building electric bikes.

“The very first bike I built – it was supposed to have a gas motor on it, and I just kind of came to the conclusion that it’s so inefficient. That electric motors have gotten lighter and more powerful and of course batteries have gotten so much more powerful.”

So he bought a drivetrain on the Internet, pieced some parts together and was so satisfied he wanted to eventually build a lot more. And it’s not, of course, that his idea was singular or unique – his own hometown of Los Gatos, he recounts, has gotten pretty crowded over the last few years “and now you see electric bikes everywhere.”

“You can see how much these could help congested cities,” he said. “You ride an electric bike around, everyone is smiling and waving and happy. You ride a gas one around – everybody’s pissed off and calling the cops.”

The company he and his colleagues built was oriented, he explains, around the desire to just get people out of their cars. And to do that through almost lust-inducing design. Taking elements from old Harleys or Porsches – wherever the company finds inspiration – and then putting it into a package that could tip someone over the edge to wanting an electric bike.

The company especially likes marrying modern technology with the aesthetic of vintage cars – that’s how the Porsche-inspired partnership with Emory came about.

Vintage Electric currently has four bike models, including the Outlaw:

-The Tracker (“Which is the bike that started it all”). It has a 35-mile range, can hit 36 MPH in race mood and boasts a two-hour recharge time. It features, according to the company, “all WWI-era motordome racer lines topped with a Brooks leather saddle, but it’s boosted by a thoroughly modern electric motor.”

-The Scrambler (“Kind of our dream bike here at the shop, our gravel road version”). It likewise can go 35 miles in street mode, with a two-hour recharge time.

-The Cruz is the company’s “laid-back, California cruise bike,” with a design that harkens back to the American Art Deco movement and boasts the same 35 Mile Range, 36 MPH in race mode and two-hour recharge time. 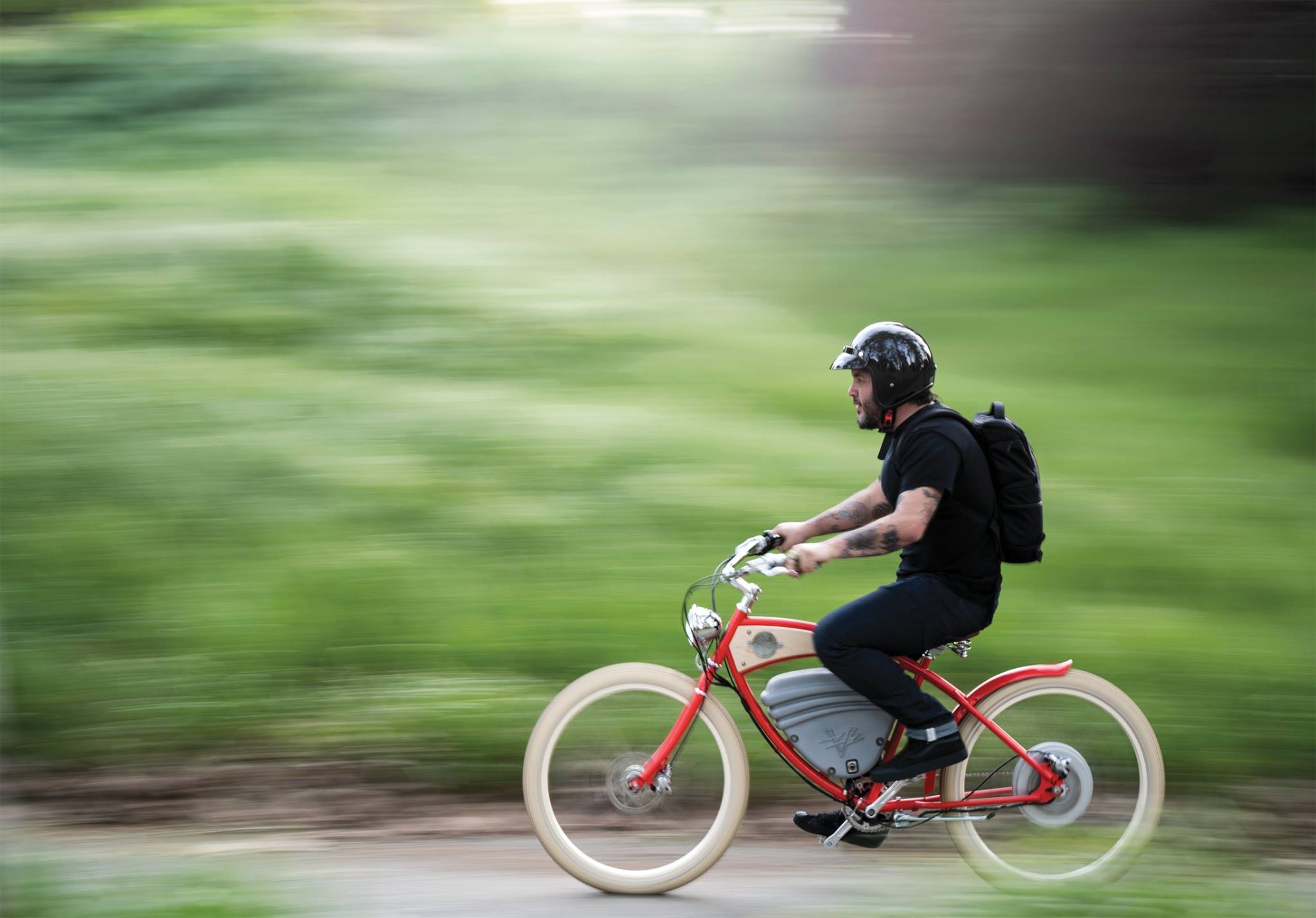 “Ninety-five percent of our customers are people who haven’t ridden their bike for a while,” Davidge said. “They stumble across our website and see our bikes and it’s like – this is not necessarily my bicycle replacement, it’s like – hey, I don’t have to drive my car everywhere. I can actually use this thing. And that’s the most exciting thing for us.”

Us too, especially if it is an ICE car they are replacing.