Tesla (TSLA) is set to release its first quarter 2017  financial results on Wednesday, May 3 after market close. As usual, the release of the results will be followed by a conference call and Q&A with Tesla’s management at 2:30pm Pacific Time (5:30pm Eastern Time).

The results are coming as Tesla’s stock price has been rising to new highs  – $320 per share at the time of writing. Expectations are therefore higher than ever. Here we take a look at what both the street and retail investors are expecting for the quarter.

The earnings results come as Tesla closed a capital raise with slightly more proceeds than expected: $1.2 billion and Chinese holding firm Tencent acquired a total 5% stake in the company.

Additionally, the results should be last before the start of Model 3 production since it is scheduled for July and the second quarter earnings are generally released in August.

Therefore, investors will be looking to get a good idea of Tesla’s position going into the most important product launch to date for the company.

The company already disclosed record delivery number for the last quarter: Tesla delivers a record number of vehicles during the first quarter 2017: ~25,000. It was likely the biggest contributor to the company’s latest stock surge. It shows that Tesla could be at an annualized production and delivery rate of 100,000 cars just with the Model S and Model X.

Tesla says that it delivered approximately 13,450 Model S sedans and 11,550 Model X SUVs during the first 3 months of the year. The company generally adjusts those numbers slightly during the earnings results.

Wall Street’s revenue consensus is $2.533 billion for the quarter and for once, Estimize, the financial estimate crowdsourcing website, predicts almost the exact same result: $2.534 billion in revenue.

That’s up quarter-to-quarter from Tesla’s actual revenue of $2.285 billion during the last quarter and significantly up year-over-year from $1.6 billion in revenue in Q1 2016. 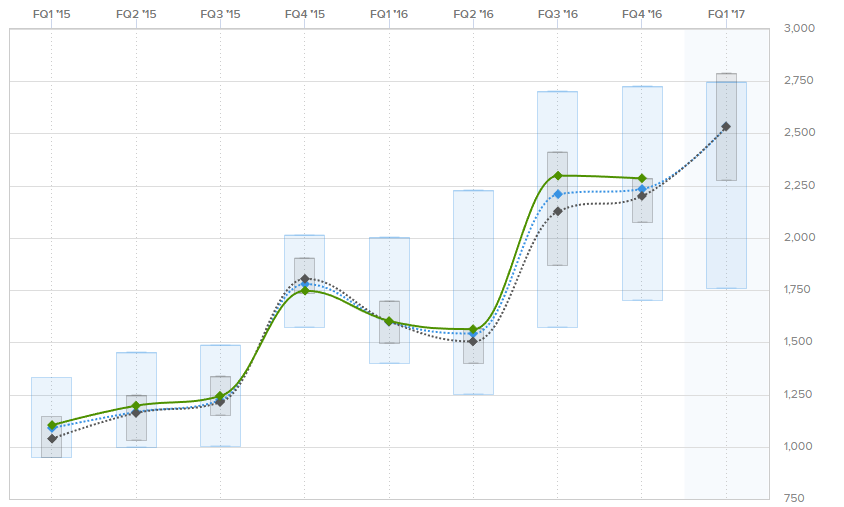 Tesla has been on a good streak – beating revenue expectations every quarter for the past 3 quarters – but expectations are much higher this quarter due to the record deliveries.

Earnings per share, or rather loss per share, is expected to thread really close to 0 for the quarter.

Like for revenue, the expectations are close for both the street and retail investors. The Wall Street consensus is a loss of $0.16 per share for the quarter, while Estimize’s prediction is the same. 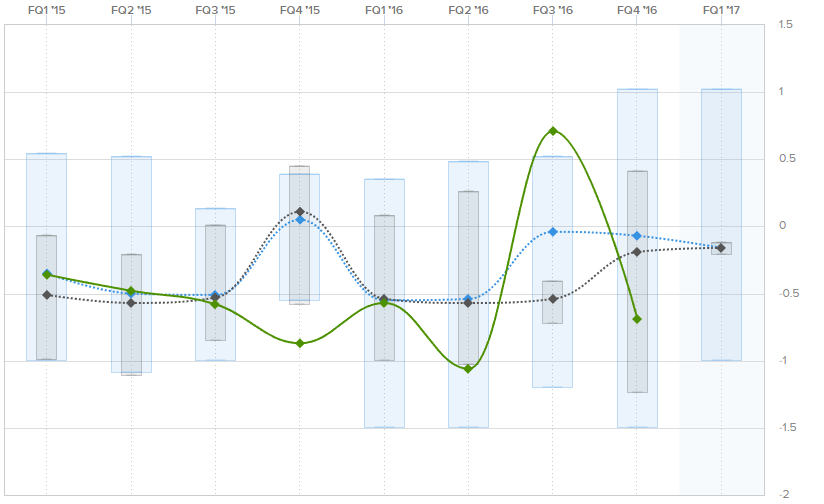 As you can see, earnings have been more of a wild card for Tesla. The company has been heavily investing in the start of Model 3 production and the expansions of its charging networks, retail stores, and service centers in preparation for the launch of the vehicle. Therefore, earnings depend a lot on how much of a strain those investments were on Tesla’s financials during the quarter.

Again, the biggest thing shareholders and analysts will be looking for is an update on Model 3 production in order to update their expectation for deliveries in 2017. After the last earnings, a lot of industry watchers were more optimistic about deliveries this year. As we reported, based on Tesla’s own part schedule plans, they could deliver around 80,000 Model 3 vehicles in 2017 with perfect execution, which, of course, is close to impossible.

Shareholders will also be looking for updates on the launch of Tesla’s solar products this summer and the state of the integration of SolarCity in Tesla as one company. As we recently reported, the solar operations have been under restructuring and we expect to start seeing Tesla operate its Tesla Energy division as a solar installer under its own brand by the summer when they will start installing their exclusive Panasonic solar panels and their own solar roof tiles.