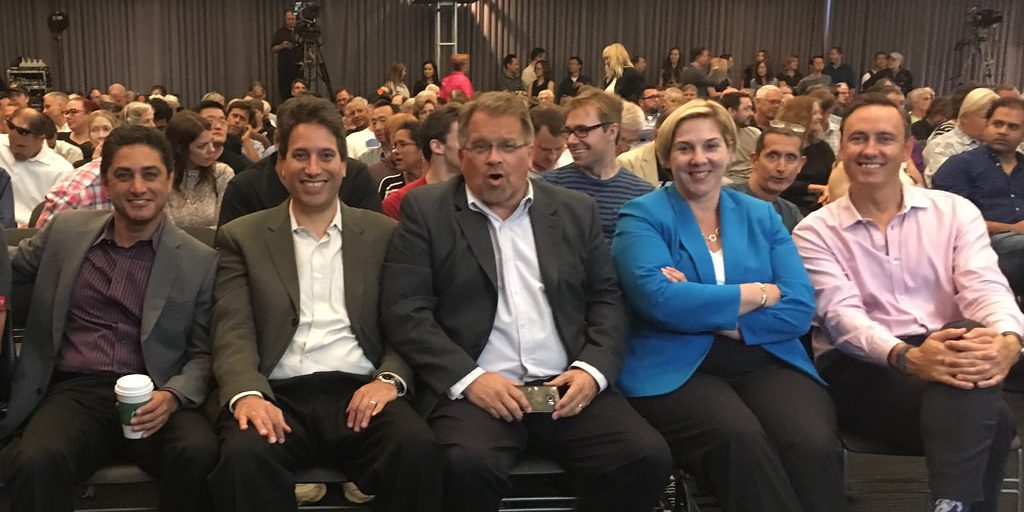 Tesla’s board of directors was under fire for a while after the announcement of Tesla’s intended acquisition of SolarCity due to most of the members having ties to CEO Elon Musk, who was also SolarCity’s biggest investors at the time. Some called for new independent board members to join Tesla’s board.

The company now says that it is currently actively searching for independent members and should announce them “fairly soon”.

Some investors, like the California State Teachers’ Retirement System, saw a problem with several board members having connections with Musk outside of Tesla. For example, board members Steve Jurvetson (far right on the picture above) and Antonio J. Gracias (far left) are also investors in Musk’s other companies, SpaceX. And his brother, Kimbal Musk, is also on the board.

They recently signed a letter sent to Gracias and obtained by Bloomberg in which they called for the new board members:

“Directors should be held to a higher standard of independence given the conflicts of interest that permeate this board. A thoroughly independent board would provide a critical check on possible dysfunctional group dynamics, such as groupthink.”

Tesla responded to the request by saying that they have been looking for new members for “several months”:

“We are actively engaged in a search process for independent board members, which is something we committed to do several months ago, and expect to announce new additions fairly soon. We regularly engage with our shareholders and value their feedback.”

We are likely to know more by the time Tesla announces its annual shareholders, which is usually held in June. It sounds like they are only talking about adding members, not necessarily removing any member.

Here’s Tesla’s current board of directors and their bios from the company:

Elon co-founded Tesla and continues to oversee the company’s product strategy — including the design, engineering and manufacturing of more and more affordable electric vehicles for mainstream consumers. As Chairman and Product Architect, he helped design the ground-breaking Tesla Roadster, for which he won an Index and a Global Green award, the latter presented by Mikhail Gorbachev. In October 2008, he took on the additional responsibility of CEO, overseeing daily operations as the company was ramping up Roadster production and accelerating the development of its second vehicle, the Model S.

Elon launched Tesla’s regional sales and service centers across two continents and in May 2009 secured a $50 million investment and strategic partnership from Germany’s Daimler. He spearheaded a successful cost-down program that enabled Tesla to achieve profitability in July 2009. He guides development of the Model S, the all-electric family sedan that is produced at the Tesla Factory in Northern California.

Elon has been fascinated by electric cars for two decades. After earning bachelor’s degrees in physics and business from the University of Pennsylvania, he worked briefly on ultracapacitors at Pinnacle Research in Silicon Valley to understand their potential as an energy storage mechanism for EVs. He planned to do graduate studies at Stanford in materials science and applied physics but put school on hold to start Internet companies Zip2 and PayPal. In addition to his Tesla duties, he serves as CEO and CTO of SpaceX, and he’s Chairman of SolarCity.

Brad W. Buss has served as a director since 2009. He retired as the Chief Financial Officer of SolarCity Corporation in February 2016 and prior to that role served as the Executive Vice President of Finance and Administration and Chief Financial Officer of Cypress Semiconductor Corporation from 2005 to 2014. Mr. Buss also held prior financial leadership roles with Altera Corporation, Veba Electronics LLC and Wyle Electronics, Inc. Mr. Buss also serves as a director for Advance Auto Parts, Inc. and Cavium, Inc. Mr. Buss was born in Canada and holds a B.A. in economics from McMaster University and an honors business administration degree, majoring in finance and accounting, from the University of Windsor.

Robyn M. Denholm has been executive vice president and chief financial & operations officer at Juniper Networks Inc. since August 2007. In these roles she has helped Juniper achieve record revenues while delivering breakthrough innovations to customers. In 2011, Denholm was a Bay Area CFO of the Year finalist and she was recently named on Silicon Valley Business Journal’s Women of Influence List. She joined Juniper from Sun Microsystems, where she served as Senior Vice President, Corporate Strategic Planning.

Ira is a recognized leader in both the venture capital industry and the Cleantech sector, and in 2007, was named one of the “Top 50 Most Influential Men Under 45” by Details Magazine. In the venture community, Ira serves on the Board and Executive Committee of the National Venture Capital Association (NVCA) and on the Board of the Western Association of Venture Capitalists (WAVC). Ira serves as Chairman of the 2010 NVCA Annual Meeting. He is also the Co-Chairman of both the VCNetwork and the YVCA, two non-profit organizations comprising more than 1,000 venture capitalists. In the Cleantech sector, Ira has served on several industry Boards, including the Clean-Tech Investor Summit (2005, 2006, 2007, 2008, 2009, and 2010 Conference Chairman), Cleantech Venture Network (Past Chairman of Advisory Board), ACORE (American Council on Renewable Energy), Energy Investors Forum (Past Conference Chairman), Energy Venture Fair, and California Climate Change Advisory Board. He has also served on the Advisory Boards of the Southern California Tech Coast Alliance, Forum for Women Entrepreneurs (FWE), and the Comerica Venture Capital Advisory Board.

Ira is also an active leader at Stanford University, where his contributions have included teaching the course on Venture Capital and serving on the Board of Visitors of Stanford Law School. Ira is also a Contributor to Nimmer on Copyright, the leading copyright treatise.

Mr. Gracias serves as Valor’s Chief Executive Officer and Chairman of the Investment Committee. His duties include overall responsibility for the Firm’s management, operations, and investing. These include but are not limited to: human resources, management of the Firm’s board, raising capital, limited partner communication, deal generation, investment selection, investment strategy, investment committee management, transaction structuring, and portfolio company management and improvement.

Mr. Gracias has over 15 years experience investing in a variety of sectors including private equity, public equity, and real estate transactions. Mr. Gracias is Valor’s Founder and Chief Executive Officer. Prior to founding Valor in 2001, Mr. Gracias served as Founder and Managing Member of MG Capital from 1995 through 2000. MG Capital was a private equity firm headquartered in Chicago, Illinois. As the lead transaction principal, Mr. Gracias sourced investments in nine middle market manufacturing companies where MG Capital played the role of lead equity sponsor. He also sourced three non-lead investments in a diverse set of industries. Mr. Gracias served as the Chief Executive Officer of MG Capital’s electronic connector holdings, Connector Service Corporation. He managed the company through growth from $10 million to $125 million in revenue before exiting the investment in 2001. In addition, Mr. Gracias served as Chief Executive Officer of Industrial Powder Coatings, Inc., a $65 million revenue supplier to the auto parts and appliance sectors. Prior to MG Capital, Mr. Gracias was an Associate with Goldman, Sachs & Co. in New York where he served the firm’s institutional clients in the International Equity Division.

Mr. Gracias holds a joint B.S. and M.S.F.S. (honors degree) in International Finance and Economics from the Georgetown University School of Foreign Service. He also studied corporate structures and economic development at Waseda University in Tokyo, Japan. Prior to completing his Masters, Mr. Gracias returned to Japan as a Nikko Securities Fellow. Mr. Gracias holds a J.D. from the University of Chicago Law School. He is fluent in Spanish, proficient in Portuguese, and has a working knowledge of Japanese.

Steve Jurvetson is a managing director of Draper Fisher Jurvetson, a leading venture capital firm and one of the most active energy and clean tech investors, with affiliate offices around the world and $6 billion under management. Steve was the founding venture investor in Hotmail, Interwoven and Kana. He also led the firm’s investments in Tradex and Cyras (acquired for $8 billion).

Previously, he was an R&D engineer at Hewlett-Packard, where seven of his communications chip designs were fabricated. His prior technical experience also includes programming, materials science research and computer design at HP, the Center for Materials Research, and Mostek. He has also worked in product marketing at Apple and NeXT.

He was honored as “The Valley’s Sharpest VC” on the cover of Business 2.0 and chosen by Forbes as one of “Tech’s Best Venture Investors,” by the VC Journal as one of the “Ten Most Influential VCs”, and by Fortune as part of their “Brain Trust of Top Ten Minds.”

Kimbal Musk is CEO of Medium, Inc, an internet software company based in Boulder, Colo. Prior to Medium, he has been involved in many young businesses. Mr. Musk and his brother, Elon, started their first company, Zip2, an early content management company for the Internet, 1995. It was the first company to bring vector-based maps and door-to-door directions to the internet, and it built the online content management systems behind more than 100 media companies, including The New York Times. Zip2 was sold for $307 million in cash in 1999, one of the largest transactions of its kind in the internet industry.

Since then, he has helped found, advised, and invested in several exciting young companies. His prior and current board seats, in addition to Tesla Motors, are Medium, Inc., Everdream Corp., BlackBook Media, SpaceX Corp., and ProgressNow.org. He also owns The Kitchen, in Boulder, Colo, one of “America’s Top Restaurants” as per Zagat, Gourmet, and the James Beard Foundation. Mr. Musk has served as an Adjunct Professor at New York University, and is a graduate of Queen’s Business School in Canada and the French Culinary Institute in New York City.