Tesla’s stock is up 3% and now testing new all-time highs this morning after the company published its delivery numbers for the first quarter 2017, which managed to dispel some common arguments used by shorts and naysayers.

The argument that Tesla can’t sustain Model S sales is becoming harder to make as the company not only managed a year-to-year increase, but also a quarter-to-quarter increase in its large sedan numbers.

The record number of deliveries has been clearly helped by an increase in Model X production. Tesla delivered approximately 11,550 units –  that’s about 2,000 more than the previous quarter, which was also the previous record.

But the Model S, Tesla’s flagship sedan, is still the company’s bestseller and with about 13,450 deliveries in Q1 2017, it still doesn’t seem ready to decline.

It has seen some ups and downs in term of deliveries over the past quarters and it has yet to beat its ~17,000 deliveries during Q4 2015, but it instead seems to be stabilizing at around ~15,000.

Here are Tesla’s Model S and X quarterly deliveries since the introduction of the Model S in 2012:

There are likely going to be some market shifts over the current quarters. For example, Hong Kong, which was good for over 1,000 sales per quarter, will likely drop with the current EV incentives being significantly reduced.

On the other hand, new markets for Tesla, like New Zealand and Taiwan, just started to get their first deliveries and others, like South Korea and the United Arab Emirates, are expected to start receiving their first shipment in the coming months.

Those markets will receive both the Model S and X at the same time, which is relatively new for Tesla’s market expansions. 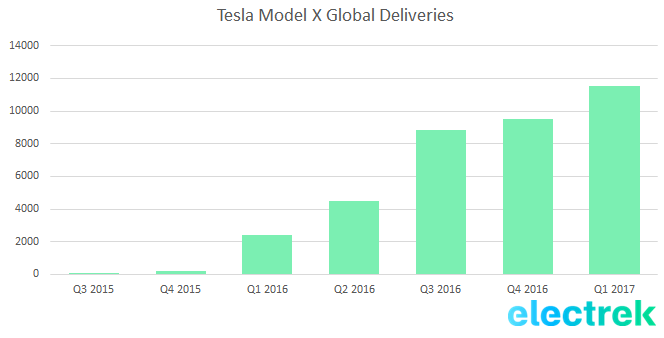 Now that the Model X right-hand drive went into production, it has become available in all of Tesla’s markets and it looks like the SUV’s production has roughly caught up with Model S.

The Model S has potential to grow during the second quarter, especially due to the discontinuation of the S 60 and S60D.

As we previously reported, Tesla appears to be attempting to upsell the Model S to Model 3 reservation holders. The company recently sent out an email blast to reservation holders reminding them that April 15 is the last day to order Tesla’s least expensive version of its currently available sedan.

It could result in a surge of Model S 60/60D sales and deliveries during the second quarter, which could enable Tesla to reach its delivery goal of 47,000 to 50,000 units during the first of the year – leading to the start of Model 3 production planned for July.