Tesla has been promising a special event to celebrate the opening of its battery factory in Nevada for a while now. Attending the event was even part of the prizes of Tesla’s second round of the Model S owner referral program. Now it finally has a date: July 29th. The company sent out the invitations to the top Model S referrers last night.

Every Model S owner who referred 5 and more sales from October to December received the invitation:

“Congratulations on winning tickets to the upcoming Gigafactory Grand Opening! We appreciate your support and participation in the Referral Program.

We are excited to announce that the Gigafactory Grand Opening event will take place on the evening of Friday, July 29th at our facility outside Reno, Nevada.”

The factory is still under construction and currently only the first phase is up with an 800,000-square-foot footprint and 1.9 million square feet of space. It is often referred to as the “pilot plant”. Once completed, the Gigafactory is expected to have a total operational space of about 13 million square feet.

Model S owner Kushari shared an image of his invite on /r/Teslamotors: 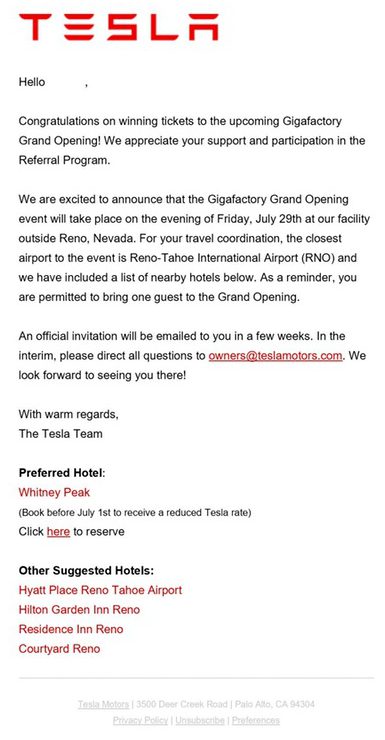 Tesla has been referring to the plant as ‘Gigafactory 1‘ – hinting that more Gigafactory will follow.

In October 2015, the company moved the Tesla Energy production line from its Fremont factory to the plant in Nevada and has since been ramping up for volume production to start in early 2016.The real challenge will be the start of battery cell production at the facility, which is expected to start later this year. Maybe Tesla will reveal a little more information about the cells to be produced at the plant during the Grand Opening event.

Last year CEO Elon Musk referred to the cells set to be manufactured at the plant as having “moderate” battery technology improvements over current products, but the real game changer will be the cost. Tesla aims to reduce its battery cell cost by 30 to 50% through economy of scale at the Gigafactory.