Tesla is looking to hire Autopilot test drivers in Austin

Tesla is looking to hire Autopilot test drivers in Austin — and both the new positions and the location have interesting implications.

Over the last few years, Tesla has been criticized for not reporting autonomous test mileage in California.

The California DMV makes companies who are testing autonomous vehicles in the state submit yearly “disengagement reports” to release details about each time their autonomous test vehicles had to be disengaged.

In its report back in 2016, Tesla reported having four self-driving Model X prototypes driving just over 500 autonomous miles on public roads. As we reported based on sources, the mileage was mainly for producing video demonstrations of what they could do with their newly launched hardware suite at the time.

Since then, Tesla hasn’t submitted any autonomous test miles in California for its vehicles until earlier this year, and again, it was to produce a video demonstration.

To explain the lack of autonomous mile reporting, Tesla claims to mainly be testing its autonomous driving technology in “shadow mode” on its existing fleet and at other locations than California public roads, which enables them to not log those miles with the DMV.

It has never been clear where, other than California, Tesla is testing its Autopilot and self-driving system prototype.

ADAS generally refer to level 2 driver-assist features, like Autopilot’s Autosteer and Traffic-Aware Cruise Control, but in the job description, Tesla also mentioned that the individuals will be testing “autonomous vehicles”:

We are looking for a highly motivated individual to accelerate our vehicle-level testing for autonomous vehicles. The ADAS Test Operator will help drive Tesla’s Autopilot by testing daily Autopilot firmware updates on a local, predetermined route, to allow tracking of improvements across firmware revisions. The role requires someone highly organized, objectively focused when making judgements, and confident in their ability to manage their own daily routine.

Interestingly, Tesla is listing positions for ADAS test drivers in both the Bay Area and in Austin. 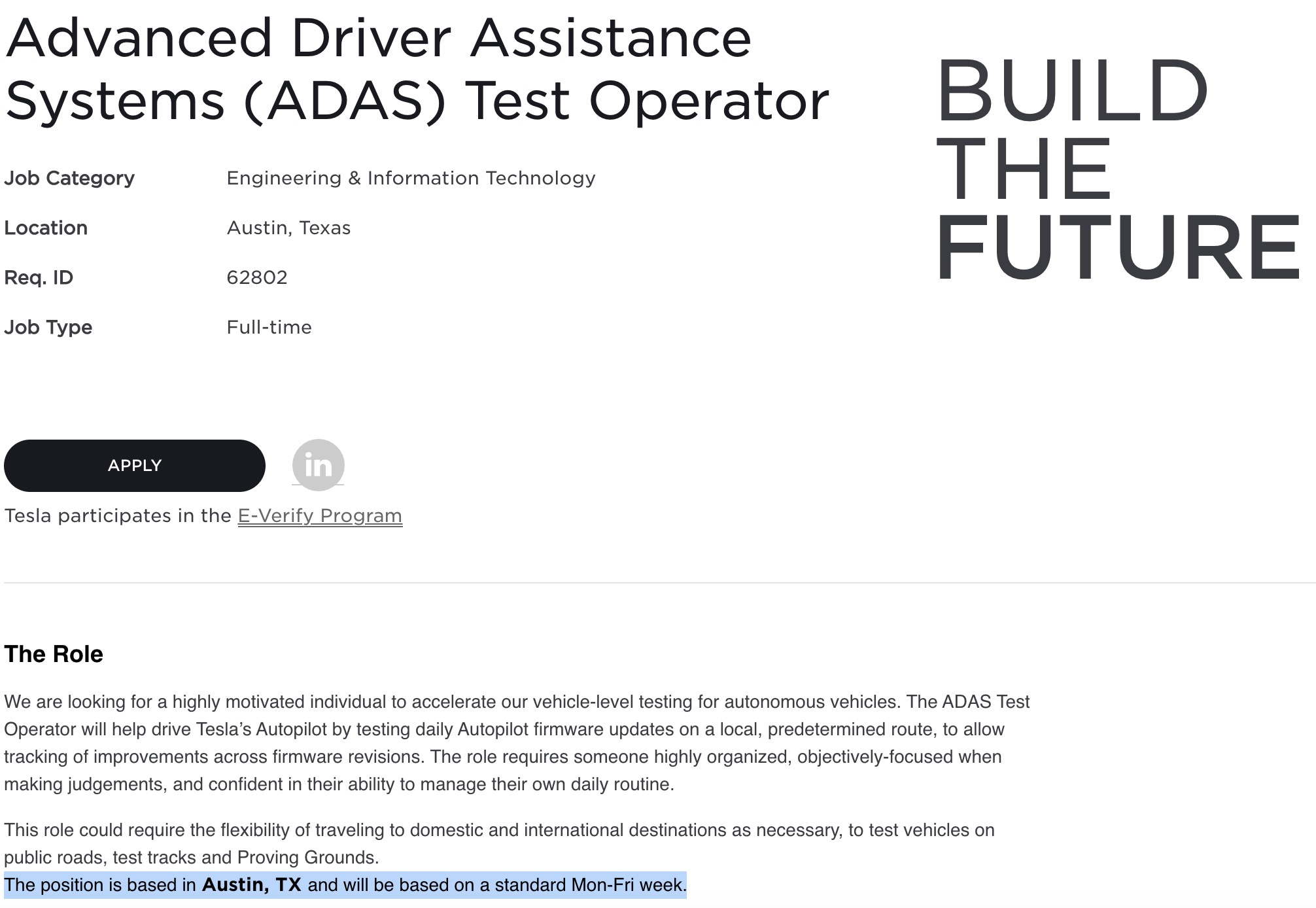 Austin is in the news a lot these days in relation to Tesla since Electrek reported that it has been selected for Tesla’s next factory in the US, but Tesla already has operations in the city with its Autopilot hardware team being based there.

To be fair, I don’t think it’s massive news, but it provides interesting insights into Autopilot testing, which we didn’t think much about beyond the “shadow mode” claims.

I think Tesla also gets around the reporting rules by not really testing their mode advanced Autopilot software as a “self-driving system,” but as a driver-assist system that still requires hands on the steering wheel.