As reported earlier today, NHTSA is closing its investigation of the fatal accident on Tesla Autopilot without finding any defect or issuing any recall. We now have access to the full report (embedded below) and there are some interesting key findings about the crash and Tesla’s Autopilot in general.

For example, the agency reviewed data that indicates Tesla’s crash rate was reduced by 40% after the Autopilot’s Autosteer feature was introduced.

Autosteer is the main feature of the Autopilot system and it enables the vehicle to steer itself in certain conditions.

NHTSA’s Office of Defects Investigation (ODI) reviewed crash rate data from Tesla’s vehicles before and after the introduction of Autosteer:

ODI analyzed mileage and airbag deployment data supplied by Tesla for all MY 2014 through 2016 Model S and 2016 Model X vehicles equipped with the Autopilot Technology Package, either installed in the vehicle when sold or through an OTA update, to calculate crash rates by miles traveled prior to and after Autopilot installation.

They came to the conclusion that “the data show that the Tesla vehicles crash rate dropped by almost 40 percent after Autosteer installation.”

From 1.3 crashes per million miles before Autosteer to 0.8 crashes after Autosteer: 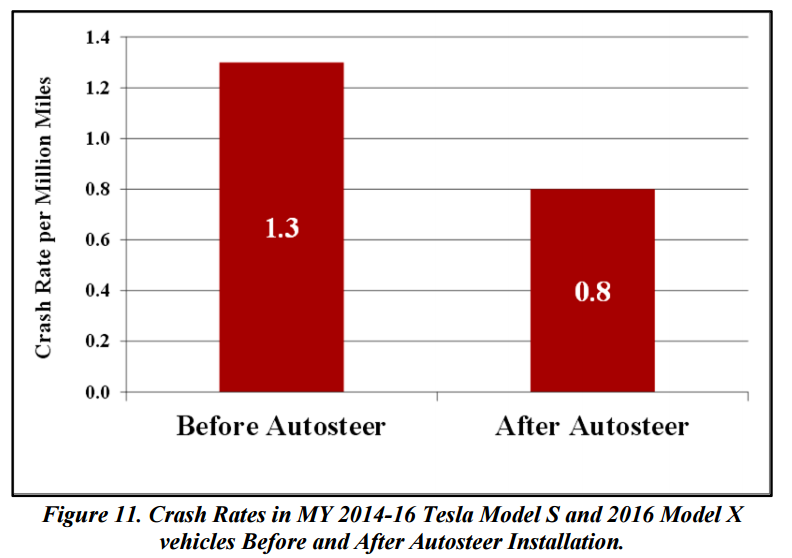 The data is particularly interesting in the context of the debate between going directly to fully autonomous cars (like Waymo or Ford) or taking the route of gradually more autonomous vehicles leading to full autonomy, like Tesla and a few other automakers are trying to accomplish.

The argument against the latter is that the transition between autonomy and manual control can be dangerous, but Tesla’s argument is that it reduces the number of accidents if used properly, which the data appears to confirm.

Those findings were part of NHTSA’s general probe of Tesla’s Autopilot system, but the agency also looked directly at the specific accident that prompt the investigation.

An interesting finding on the crash itself was that NHTSA did a crash reconstruction and it claims that it “indicates that the tractor trailer should have been visible to the Tesla driver for at least seven seconds prior to impact.”

It leads to the report’s main conclusion which that Autopilot, like any other ADAS system, “require the continual and full attention of the driver to monitor the traffic environment and be prepared to take action to avoid crashes.” The agency reviewed Tesla’s customer-facing literature about Autopilot and concluded that:

“Although perhaps not as specific as it could be, Tesla has provided information about system limitations in the owner’s manuals, user interface and associated warnings/alerts, as well as a driver monitoring system that is intended to aid the driver in remaining engaged in the driving task at all times.”