One of the prizes for the latest round of Tesla’s referral program, which ended last Friday, was an invite for two at the ‘Gigafactory Grand Opening’ on July 29. The invites are now going out with a few more details on the event, as well as a raffle for more invites for Tesla owners.

The event will start at 6pm at Tesla’s ‘Gigafactory 1’ at 1 Electric Avenue, Sparks, Nevada, on July 29th. Attendees will be offered test drives, without specifying for which vehicles, and they will offer factory tours before and after “remarks” at 9pm.

Here’s are the bullet points in the RSVP:

This is the invite for the Tesla owners who referred  4 or more new buyers:

Other Tesla owners have received invitations to enter a raffle to win an invite to the event. Some of the owners who received this invitation reportedly also referred 4 or more new buyers, but didn’t received the direct invite, which created some confusion.

We contacted Tesla to get some clarifications and we will update when we have more details.

Here’s the invite to enter the raffle: 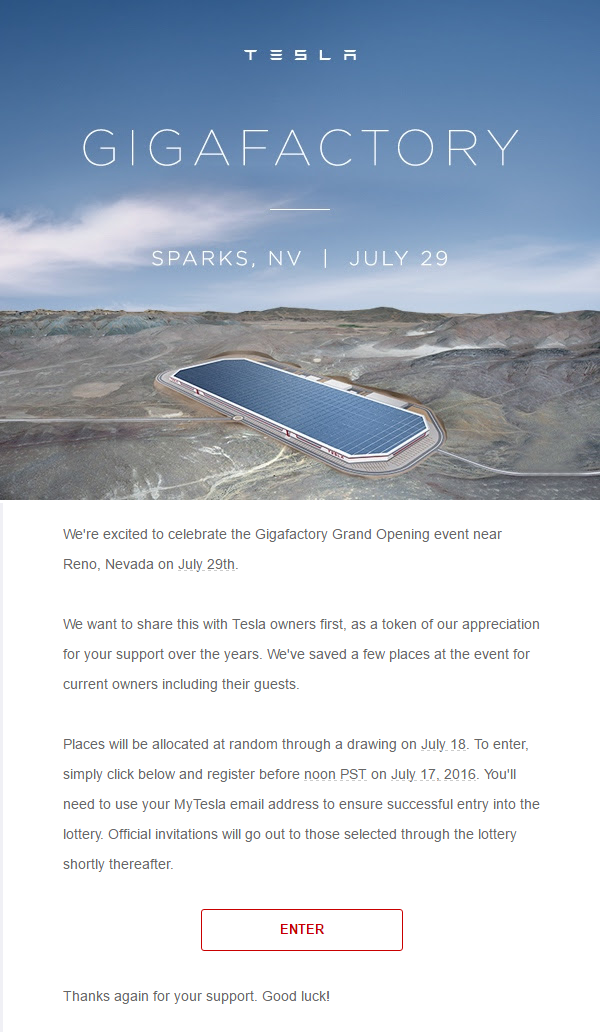 Aside from current Tesla owners, we also reported that Tesla quietly created a ‘Golden Ticket’ drawing for all the Model 3 reservation holders who placed a pre-order during the first day and randomly selected 12 winners to receive an all-expenses paid trip to the Gigafactory Grand Opening.

Tesla CEO Elon Musk has been building up expectations recently for the event to be something quite special. He said that “one thing Tesla is good at is we throw good parties”.